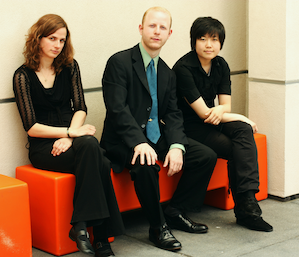 Sahba Aminikia’s Deltangi-Ha was premiered by the Delphi Trio Sunday afternoon at Old First Church. The new work is a series of what the composer calls “postcards” evoking memories from his life in Iran. It began with a strong hook — intense gestures uttered over a vehement ostinato in the piano, representing the bustling metropolis of Tehran. The flavor of Middle Eastern music was immediately palpable but not overpowering. It set the composer’s voice as strongly influenced by his native country’s idiom yet also undeniably informed by classical training and the world of academic new music — a healthy balance. In a preconcert talk, Aminika, whose string quartet was premiered by Kronos last year, remarked that his aim was to completely avoid the sound of “European sentimental music.” That’s pretty difficult to do with just piano, violin, and cello.

The next vignette is about “Childhood Under Missiles.” The strings captured the whistle of Sadam Hussein’s incoming rockets while clusters in the piano’s lower register represented their destructive landing in the audible distance. Aminikia confessed that his memories of the Iran–Iraq war were not all bad. I can relate to this assertion, for I heard Iraqi Scud rockets landing in Israel during the Gulf War. To children who were shielded from the outright horrors of war, the overall atmosphere can feel exhilarating and heroic. This fear tinged with excitement was captured in Aminikia’s music.

The movements segued into one another without pause, the way memories float in and out of consciousness. From urban chaos to war scenes, the composition moves to tender moments in “First Love Under Snow” and to celebration in “Nawruz” (the Persian new year). The last movement, “Those Who Flew Away,” refers to “memories flying over the oceans trying to reach me,” according to the composer’s program note. This latter movement was by far the most effective, made even more poignant by that beautiful, extramusical idea. The piano played tremolo throughout, under detached string lines that floated free and lost. Tremolo is a common effect on stringed instruments, whose players simply move their bows rapidly with their wrists. On the piano, the same key has to be reengaged by alternating fingers. Pianist Jeffrey LaDeur played his notes with remarkable endurance, creating an eerie soundbed until the ending.

Aminika also talked about media-generated connotations associated with his country: a terrorist-supporting, extremist, Islamic regime. Islamophobia takes over our perceptions, and we don’t hear enough about other aspects of Persian culture: the poetry of Rumi and of Hafiz Shirazi, for example, and a culturally rich nation thousands of years old. As an Israeli, the war tensions resonate very strongly with me when I hear family members, fraught with worry, claiming, “If they get a bomb, we’re done for!” But I too love Rumi and was reminded by Deltangi-Ha of the “Israel ♥ Iran, we will never bomb you” campaign initiated by citizens who oppose their governments’ penchant for war — it strengthens them politically.

Fear tinged with excitement was captured in Aminikia’s music.

But back to the music. The Trio opened the concert with Haydn’s implausibly light and bright Piano Trio in E-flat Major. It has only two effervescent movements, both covered by seemingly simplistic and predictable arpeggio patterns. Still, it is very difficult to muster this naive Viennese levity, shedding the weight of modern cynicism to play purely classical music as if it had just been discovered. The Delphi Trio, fresh out of the conservatory, plays with the tender young joy of a newly united trio, with a bright future awaiting them with a residency at Old First Concerts and in Banff, Canada, plus a touring schedule that continues to grow.

Since the Haydn contains no slow movement, it made perfect sense to follow it up with the Schubert Notturno in the same key. Schubert extends Haydn’s language to reach stunning harmonies: heart-choking major–minor transitions and dark harmonic turns typical of his late style, colored with expertise by the Delphi’s sensitive playing.

The Delphi Trio, fresh out of the conservatory, plays with the tender young joy of a newly united trio.

After intermission, the Trio played Dvořák’s Piano Trio No. 3 in F Minor, a typical, late-Romantic tour de force. This longish work contains enough musical material for an entire symphony, keeping its three players very busy. The Delphi Trio played it efficiently, going through all the motions, though a little bit of extra boldness would have served them nicely. Liana Bérubé is an elegant violinist and a great player but sounded somewhat timid. Michelle Kwon plays her cello with great fluidity but could stand to dig deeper, especially in a church acoustic. (Courage!)

Old First Church, now in its 42nd season, is one of San Francisco’s most exciting chamber music venues and has no fewer than 72 concerts planned this season, most of them by emerging local artists. Its location, on Van Ness Avenue on the border of the Polk Street district and the Tenderloin, a few blocks north of the Civic Center, is quirky. The acoustics, if on the boomy side, are enjoyable, especially in the balcony. Its concerts are well worth hearing.