Omni Foundation for the Performing Arts 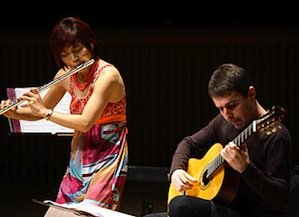 The repertoire for solo classical guitar has expanded exponentially in the last century, starting with music of the Spanish nationalists, continuing with internationally significant works written for Andrés Segovia and Julian Bream, and currently including a dazzling array of works in every style and from every corner of the world. The Omni Foundation is celebrating this diversity with a series that includes artists from Japan, China, Brazil, Croatia, Bulgaria, Russia, France, and Sweden, as well as the U.S. It’s an exciting and interesting season of guitar music, but Saturday’s recital at the War Memorial Green Room by guitarist Atanas Ourkouzounov and flutist Mie Ogura stood out even in that eclectic lineup. A wonderful new repertoire has been created in recent decades by pioneer guitar ensembles like the Assad Duo and the Los Angeles Guitar Quartet, and many are now following their example, yet ensembles featuring the guitar with other instruments are still rare on the concert stage.

Around the World With Eduardo Fernandez

Xuefei Yang Plucks at the Heart

Ogura and Ourkouzounov presented a diverse, appealing program for flute and guitar, featuring their arrangements of 20th-century music by both jazz and classical composers, along with several of their own compositions. Ourkouzounov is an excellent composer who, much like Dusan Bogdanovic, highlights the asymmetric rhythms and modal harmonies of Eastern Europe, as well as idiomatic and coloristic effects, as the basis for a personal style.

His Babini devetini (Old wives’ tales), for flute and guitar, was given its premiere performance and is a fine example of the potential of the idiom, with its exciting interplay between the instruments, beautiful sonorities, and intriguing extended techniques. Illusions Sonores #2: Extension, for solo guitar, showcased Ourkouzounov’s mastery of classical formal development and was given an absolutely brilliant performance.

Claude Debussy and Béla Bartók were the other classical composers on the program. Ogura gave a sensitive performance of Syrinx, for solo flute, that was languorous and supple, like a rhapsodic improvisation. La plus que lente was arranged from the piano original for flute and guitar, and Ogura and Ourkouzounov gave Debussy’s subtle, rhythmically challenging valse lente an ideal interpretation. Bartók’s Sonatina, with its use of Romanian folk music in a classically composed piece, provided an appropriate precedent for Ourkouzounov’s works.

Ourkouzounov is an excellent composer who highlights the asymmetric rhythms and modal harmonies of Eastern Europe.

The arrangements of music by jazz composers George Gershwin, Duke Ellington, and Chick Corea were less successful. While the performers’ impeccable technique and beauty of sound were much in evidence, the arrangements lacked the clear artistic vision associated with the best performances of the material or of the other material on the program.

The enthusiastic audience was rewarded with an encore arrangement of a Romanian folk dance, which Mie Ogura played with breathtaking virtuosity on a small, high-pitched instrument that she bought from Gypsies at a fair. For his part, Atanas Ourkouzounov accompanied most creatively, with both hands tapping the fingerboard.