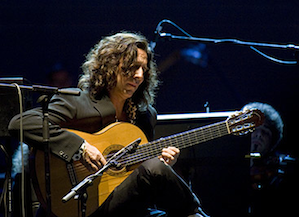 The Omni Foundation for the Performing Arts presents one of the world’s foremost guitar series. The primary focus is on classical guitar, but it also does an outstanding job of showing the breadth of the guitar’s appeal, including programs by superlative flamenco, jazz, and world-music guitarists. On Wednesday at the Palace of Fine Arts Theater, in partnership with the Flamenco Society of San Jose, Omni presented Tomatito and his Flamenco Sextet in a stunning display of the depth, power, and variety of contemporary flamenco.

José Fernandez Torres, known as Tomatito, is one of today’s most-admired flamenco guitarists, known for his mastery of traditional rhythms, his classic work with singer Camarón de la Isla, and his pioneering efforts in establishing Nuevo flamenco by augmenting traditional flamenco with music influenced by classical, jazz, blues, rock, pop, bossa-nova, tango, or fado. His program gained depth by being dedicated to the memory of Tomatito’s friend and mentor Paco de Lucía, arguably the most influential flamenco guitarist of the modern era, who died unexpectedly just last month.

Tomatito is an enormously charismatic musician who entered the hall with a regal bearing, modestly gracious and yet unsurprised by the adulation expressed by a large audience that showed its appreciation before the first note was played. Tomatito began to play, as a soloist, an introspective, melancholy, and rhythmically free Rondeña. After he drew the audience in with his understated magic, the members of his sextet gradually joined him, with second and third guitars playing rasgueo, the complex strumming patterns that characterize flamenco guitar; other members performing palmas, or syncopated clapping patterns that add rhythmic vitality to the music; and all members of the ensemble and even audience members adding jaleo, or words of encouragement for the performers, sometimes spoken, often shouted.

Omni presented Tomatito and his Flamenco Sextet in a stunning display of the depth, power, and variety of contemporary flamenco.

Flamenco has a long and complex history with ancient roots. Tomatito is much loved both as an embodiment of its deep traditions and as a leader in contemporary developments in the form. Like American blues, flamenco began as the music of poor people, so its emergence is poorly documented. It has been traced to the 15th-century arrival in Spain of Gypsies whose musical traditions blended with those of Christians, Arabs, and Jews to create unique forms, modes, and rhythms. In the late 19th century the music became popular in cafes throughout Spain, launching a great debate about the depth of the original music and the loss alleged as the music changed and became more widely popularized.

In 1922 composer Manuel de Falla and poet Federico García Lorca organized El Concurso del Cante Jondo (Contest of the Deep Song) to celebrate and promote the depth of traditional flamenco. Although it began a steady rise in the status of traditional flamenco among Spain’s cultural and intellectual leaders, a shallower, more tourist-oriented version continued to dominate the field. In post-Franco Spain, an appreciation for the more-profound traditional flamenco, embodied by artists like Antonio Mairena and Nino Ricardo, was combined with an openness to influences from jazz and world music. Artists such as singer Camarón de la Isla and guitarist Paco de Lucía embodied these trends and created today’s Nuevo flamenco; as a young man, Tomatito worked closely with both of them and is today flamenco’s most-prominent guitarist.

Tomatito is much loved both as an embodiment of deep traditions and as a leader in contemporary developments in the form.

Tomatito’s sextet, featuring two singers, two guitarists, a percussionist, and a dancer, is an accomplished and flexible ensemble able to project a complex range of feeling in a widely varied program. They gave skillful performances of traditional flamenco forms, including a joyful Alegrias, a powerfully rhythmic Bulerias, and a soulful and show-stopping Solea. Jazz influences infused the performances of Two Much by pianist Michel Camilo and Our Spain by great bassist Charlie Haden and lent a complex flavor to Tango Argentino and Rumba.

Each selection featured Tomatito’s outstanding solo performance, while many included vocals by Kiki Cortiñas and Simón Román, always accompanied by the fantastic rhythmic pulse of the sextet. Twice, the spotlight shifted to Paloma Fantova, the group’s featured dancer. Briefly near the beginning of the concert and in an extended 10-minute solo in the concluding Solea, Fantova amazed the eyes and melted the hearts of the audience with her movement, by turns fluid, graceful, fiery, and brilliant.

In the encore, Tomatito graciously gave each member of the ensemble time to shine; they included El Cristi and José del Tomate on guitars, Moisés Santiago on cajon, and vocalists Kiki Cortiñas and Simón Román.