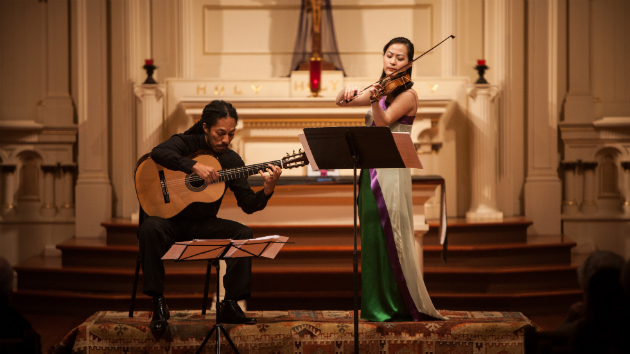 The classical guitar is best known for its intimate solo voice. But composers have used it in ensembles increasingly through the last century, and the Omni Foundation for the Performing Arts has been fostering the development of these mixed ensembles with guitar. Earlier this year it sponsored the Cavatina Duo, an excellent flute and guitar ensemble, and on Friday evening at St. Mark’s Lutheran Church it presented violinist Hye-jin Kim and guitarist João Luiz in a concert of music from Brazil, Argentina, and Poland.

Kim, a winner of the Yehudi Menuhin Competition and the Concert Artists Guild Competition and an established orchestra soloist, spoke to Friday’s audience about her love of world music and her desire to expand her horizons. Meeting Luiz, a superb proponent of the music of Brazil, catalyzed that wish and they are now bringing a fascinating repertoire to the world’s concert halls.

Camargo Guarnieri, who studied Brazil’s traditional folk cultures and absorbed them into his own passionate musical language, is the most important Brazilian classical composer from the generation after Heitor Villa-Lobos.  His Dança Brasileira was inspired by street celebrations of the abolition of slavery. The piece is based on the traditional, rural samba as practiced by the descendants of slaves, and its rhythmic ostinato is enlivened by a continuously shifting pattern of accents.

Luiz has followed in the footsteps of his mentor, Sergio Assad, and is also active as an arranger and composer. After playing two pieces by Assad, the duo followed with Luiz’ Suite for Violin and Guitar. “Samba” is not the traditional rural samba referenced in Dança Brasileira by Guarnieri or the urban samba made popular by performers like Baden Powell, but a piece with samba at its heart that features a constantly changing rhythmic structure more reminiscent of Argentine composer Alberto Ginastera. “Kirsten” is a loving portrait of the composer’s wife with lush harmonies for the guitar and a romantic melody for the violin. “On Kj steps....” is a humorous portrait of the beloved Kirsten trying to teach the hapless composer how to dance. It features graceful violin lines, a rhythmically complex guitar part depicting less than successful efforts at grace, and an amusing passage for violin that sounds like an exasperated spouse.

The Brazilian portion of the program was rounded out by spirited and soulful performances of three of the most popular Choros of the early 20th Century: Carinhoso (Dear One) by Pixinguinha, Flor Amorosa (Beautiful Flowers) by Joaquim Callado and Tico-Tico no Fubá (Sparrow in the cornmeal) by Zequinha de Abreu and made popular by Carmen Miranda.

Three Tangos by the Argentine composer Astor Piazzolla kept with the South American theme. Luiz was raised with this repertoire and is now an acknowledged master, but it was delightful to see the classically trained Kim play the music with the stylistic panache of Piazzolla’s long-time violinist, Fernando Suarez Paz.

The Polish composer Gerard Drozd, the one European on the program, was represented by a graceful Adagio. The encore was Bebe by Brazilian composer and Miles Davis collaborator Hermeto Pascoal. It was met with a standing ovation by an enthusiastic audience.