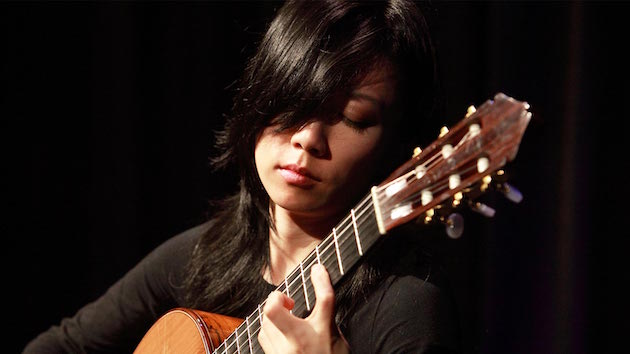 Beijing-born guitarist Xuefei Yang, long a San Francisco favorite, is a ravishing interpreter of traditional guitar repertoire, an excellent arranger for classical guitar of traditional Chinese music, and a visionary commissioner of contemporary composers of music based on Chinese themes. Her program on Saturday, presented by San Francisco Performances and the Omni Foundation for the Performing Arts showed off all the facets of her skill.

The evening got off to an unfortunate beginning with a stolid, unimaginative performance of J. S. Bach’s Lute Suite, BWV 995 that was also plagued by intonation problems. Refreshingly, Yang performed the work on a seven-string guitar and was able to perform the bass line written by Bach instead of making the octave adjustments usually adopted by guitarists. But her interpretation of the opening of the Prelude lacked direction, the subsequent fugal section lacked clarity, and the dances lacked rhythmic vitality.

I settled in for a long evening but happily the performance of Paganini’s Grand Sonata, op.39 played on an excellent six-string instrument made by Santa Cruz luthier Kenny Hill, was a model of stylistic clarity, emotional directness, and effortless virtuosity. The work was originally written as the pièce de résistance on recital tours Paganini made with the guitarist Luigi Legnani. At the end of the program, the two musicians would exchange instruments and perform the Grand Sonata. Though playing an instrument that had previously had an accompanying role, Paganini wrote a virtuoso guitar part so that he would still be the star of the show.

Yang combined the parts to create an impressive guitar solo. She played the contrasting themes and their development in the opening movement with great drama, infused the middle movement with a passionate introspection, and was a model of wit and grace in the conclusion. 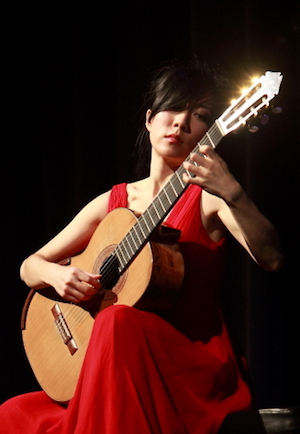 The high point of the evening was Yang’s arrangement of Sword Dance by Xu Chang-Jun, president of the Tianjin Conservatory of Music. Inspired by poetry from the era of the Tang Dynasty by poet Du Fu, the music portrays images of piercing arrows, flying dragons, and furious lightning with tremolo, rasgueado strums, and percussive attacks. The modal work was written originally written for the liuqin, a four-stringed Chinese plucked instrument with a pear-shaped body. The skillful arrangement and performance opened a new world of sounds for the classical guitar.

Brazilian musicians began to create a unique and infectious national music at the turn of the 20th century with their interpretations of European dances using a looser rhythmic feel in a style known as choro. The word choro is derived from the Portuguese word chorar (to weep), and the music is sentimental though frequently joyous. Yang performed Heitor Villa-Lobos’s Mazurka-Choro, Schottisch-Choro, and Valsa-Choro from the Suíte popular brasileira with a liveliness that made me think of Villa-Lobos’s early years when he made his living as a cafe musician.

Antônio Carlos Jobim was a great songwriter who established the popularity of bossa nova and gained fame in 1962 with his song The Girl from Ipanema. Modinha and Luiza are introspective and melancholy works which Yang performed in arrangements by the great Brazilian guitarist Raphael Rabello but her performances lacked his soulful rhythmic freedom.

Jobim wrote Felicidade for the 1960 Academy-Award-winning movie Black Orpheus. The music and it’s haunting lyric, “Sadness has no end; happiness does,” set the tone for the plot. The arrangement for this concert was by the late, lamented French guitarist Roland Dyens. Yang’s delicate touch, swinging rhythm, and sensitivity to the chromatic harmony made this perfect performance a moving homage to Dyens.

Dilermando Reis and Anibal Augusto Sardinha, better known as Garôto, (the kid), were Brazilian guitarists and composers who played important roles in the development of music in Brazil — Reis in the revival of interest in the choro style and Garôto as an accompanist of Carmen Miranda, the popular singer who was admired by musicians like Duke Ellington and Art Tatum. Yang played their music, as well as encores by Brazilian composers João Pernambuco and Luiz Bonfá, with an excellent feeling for both the music’s gentle philosophical reflections as well as its exciting and insistent styles.