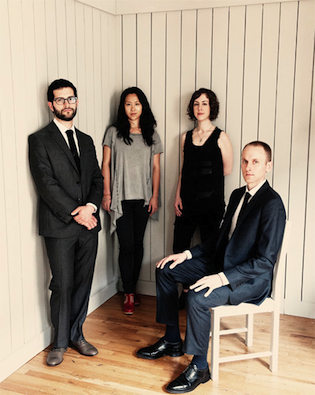 The arrangement of four small speakers, dangling from stands meant for microphones? This was a telling sight. It conveyed a bracing message once the music started: The little computer chip is an instrument, too. Attention must be paid.

This was the main musical statement made during the ensemble Yarn/Wire’s audacious West Coast debut of composer Tristan Perich’s Chalk, at the Festival of New American Music at Sacramento State University on Saturday evening. Of the many concerts offered during this adventurous 10-day festival of new music, this one encapsulated how some musicians have responded to 21st-century technology.

If you’re not familiar with “chip-music,” the idea is to produce complex, synthesized music from the sound chips of vintage computers and electronics. It’s a “back-to-basics” approach to electronic music and has the same thrill of discovery, rawness, and immediacy of early tape-loop pieces. “1-bit” music is produced with the simplest electronic chip, one which is designed to make only a single sound, usually a beep. Programming can change that somewhat, and Tristan Perich is considered one of the masters of the medium. He’s been at it for more than a decade and is known for works like his 1-Bit Symphony (2010) in which music emanates directly from a chip, instead of being pre-recorded. His 2004 1-Bit Music, was the first album released as a microchip.

The New York-based Yarn/Wire, which commissioned Chalk, is comprised of pianists Laura Barger and Ning Yu and percussionists Ian Antonio and Russell Greenberger.

Chalk, written in 2010, comprised the whole concert. It is a demanding, one-hour-long piece for two pianos, two xylophones and a four-channel, 1-bit sound chip machine not much larger than the size of an Altoids mint box. On Saturday, the small grey box was hiding behind one of the xylophones. The machine’s position, front and center, was a dramatic, visual cue. It was like a coming-out party for the ghost in a digital machine. Earbuds allowed the four Yarn/Wire musicians to stay connected with what the box was performing.

These four musicians showed how deft they are at holding their own with machine. It was not easy work. Perich has written music that takes place in a very limited musical world: the top octave of the piano and xylophone. The pitch from the chip, was especially high — think of a regular phone dial tone an octave higher. At times, the musical limitations that Perich set were downright stifling. 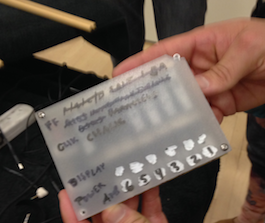 The music was at once repetitive and circular, with unexpected evolutions. For the piano and xylophone, repeating figurations challenged both pianists and listeners. At first hearing, you might have thought you were listening to a work for prepared piano. This was not the case. Because of repetition, and the force demanded on the piano keys by the loud dynamics, two simultaneous sounds emanated from the pianos — the regular pitch of the note and the hammer strike sound over the piano string. At times, that hammer strike sounded like rain pebbling over a metal awning, the piano becoming what it is at its most basic, a percussion instrument.

In this middle section, the piece loses energy and leaves a lot to be desired. Here, the musical ideas seem episodic and much of the work’s drama and energy are dissipated. Then again, decay in the electronic music realm, is inevitable.

What was most interesting in this work was that it achieved such a convincing sense of wholeness. Most musica. works that integrate sophisticated, digital technology — whether from sampling machines, looping devices, or laptops, sound like they're reaching, like they are striving to find an accommodation on the concert stage.

In Chalk, by contrast, the 1-bit sound chip’s music seemed organic to the whole. Perhaps it was limiting the sound world of the piece in the uppermost octaves that made it so. One thing is sure: The sight of four, analog speakers vibrating with 1-bit sound while four musicians followed along was a statement in itself.