Although we are isolated from one another during the current pandemic, music can still bring us together. On Thursday, Oct. 1, One Found Sound demonstrated this point by opening their eighth season with a watch party. The musicians prerecorded three pieces in an outdoor space — while practicing social distancing — at The Midway SF in the Port of San Francisco. On Thursday, they livestreamed the recording via YouTube Live, and all the musicians chimed in through Zoom for this program called “Lyric.”

The musicians also acknowledged that the virus is not the only issue currently separating us, since this is also a time of divisive racial reckoning in America. Committed to the pursuit of racial equity, One Found Sound exclusively chose works by African American composers: Valerie Coleman, William Grant Still, and Quinn Mason, whose Por Seis the musicians premiered.

The music began with Coleman’s Umoja, a woodwind quintet. Coleman is the flutist in the Imani Winds quintet, and as hornist Patrick Jankowski explained, Coleman and Imani have significantly expanded the wind-quintet repertoire. He also said it was a personal piece for the group, because he and co-founder/clarinetist Sarah Bonomo first heard it together years ago when they were studying with Imani members.

“Umoja” is Swahili for “unity,” and is also the first day of Kwanzaa. It opened with bright harmonies, convivial rhythms, and the horn playing a melody with pastoral flair. Lasting only a few minutes, Umoja was a joyful piece, with all five parts weaving together like colorful threads in an elaborate, playful tapestry. The vibrant, geometric background of the Midway provided a perfect backdrop. Unlike the string players, these winds were obviously unable to perform while wearing masks, so they performed extra far apart from each other. Despite the distance, videographer Max Savage and sound tech Scott Padden captured the individual musicians beautifully. (Padden is also a One Found Sound co-founder and bassist.)

After the performance, the five musicians who performed in it briefly chatted about how it felt and expressed the sheer delight of making music with friends again. 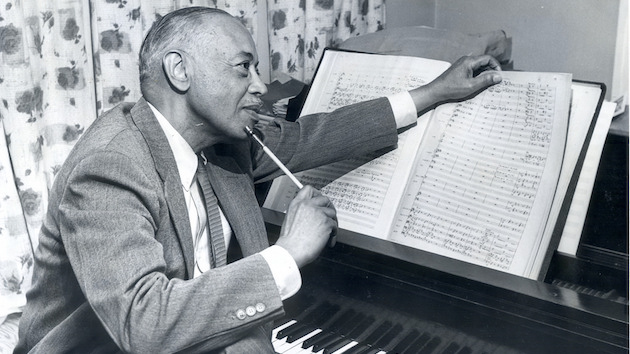 Speaking of friends, William Grant Still wrote his Lyric Quartet for three. Each of this string quartet’s three movements sketches one friend’s temperament. The first movement, “The Sentimental One,” almost sounded like the players were thinking about prepandemic days. The second movement is called “The Quiet One,” but it seemed more pensive and lusher than actually quiet. “The Jovial One” was jovial indeed.

Before playing the world premiere of Quinn Mason’s Por Seis (For Six), Mason explained the work’s subtitle, “Three Latin American Studies.” He described growing up in a primarily Hispanic neighborhood and being inspired to study Latin music.

Por Seis is in three movements, and is for flute, violin, oboe, clarinet, cello, and guitar. The first movement, “Seis Por Derecho,” is possibly named after Tabo Derecho, a guitar maker based in Manila, Philippines. Certainly, the music didn’t suggest a derecho in the sense of a violent storm. The movement was filled with repeated, bright, rhythmic-melodic patterns, almost like a festive, fast, ensemble etude.

Things turned darker, sadder, and slower in the second movement, “A Golpe de Folklore.” During this movement, I also realized it had grown dark at the Midway, and the musicians were now recording using artificial light. The movement had several virtuosic guitar solos, and guitarist Justin Houchin later said that, for him, this movement expressed how much he misses playing with other musicians. As the musicians played their final cadence, Savage panned the shot up, as though as to suggest that things were about to start looking up.

The “Jota” third movement is a traditional courtship dance from northern Spain using castanets, but it can denote a folk song that precedes the dance. I wondered if Mason intended his second movement to be that preceding song. Regardless, the final dance was filled with swirling, lively lines in compound meter. Its form conjured a ritornello, because players took turns playing a solo episode, after which the group played in unison.

After the performance, flutist and co-founder Sasha Launer relayed the experience of recording it as a metaphor for our current time: They recorded it at night, separated from each other, and surrounded by darkness. Although our current time might indeed be dark, One Found Sound’s musicians conjured brighter days — they radiated amplified joy when they were able to play together again.