Pippin's 30-year-old Pocket Opera uses small venues, mostly young singers, the Pocket Philharmonic, "minimal production values," Pippin's wry-and-wise commentary, and above all, his "English settings" — unique, brilliant translations. Faithful to the original, even if taking liberties with wildly anachronistic references, singable, true to the rhythm of the French text, and always meaningful and mirthful, text by Pippin has been at the heart of Pocket Opera.
Comedy Trumps Drama
Orpheus was funny to begin with, Hector Crémieux's libretto sparkling with coy, then-contemporary twists on the ancient legend about the singer and lyre-inventor, who eventually ventures into Hades to rescue Eurydice. In the journey from Crémieux through notable English National Opera and operetta-company presentations down to Pippin and the Pocket, none of that high drama remained. 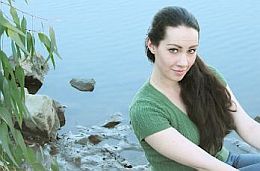 Instead, Orpheus (Nicholas Patton in a title role of minimal presence) is just a bad-news bear of a spouse for Eurydice (Jillian Boye), who has an affair with Pluto (Michael Mendelsohn), god of the Underworld. She dies happily ever after (she thinks), escaping to be Mrs. Pluto in the safety of the Underworld. Orpheus appeals to the gods on Olympus and to randy head-god Jupiter himself (Michael D. Reed).

Alas, Bad Guy No. 1 behaves badly and soon Eurydice is pining for her Pluto:
My days are unbearably boring!
Has Pluto become so blasé?
How long can he go on ignoring
A girl who came such a long way?

So eager to please as a lover,
He promised to show me around;
But now that the novelty's over,
He's nowhere in hell to be found ...
Instead, Pluto is visiting Olympus where Jupiter is facing a revolt from gods, demigods, and hemi-demigods, whose uneventful lives seem to be even "more boring than Southern California." As part-time demigoddesses and cancan dancers, Shannon Kilpatrick and Alanna Pinell use their cheerleader charms to instigate the revolution, while Jupiter embarks on a visit to Down Below to investigate the reports of wild entertainments there. Turning into a charming fly ("my powers of metamorphosis are handy"), he seduces Eurydice ... but let's not get into any spoilers.
Jupiter Is Not the Only Fly in the Ointment
With all the fun of Offenbach's sparkling music (which must have sounded so much better in Noriac's days, before coming at you from a zillion soundtracks and commercials), Pippin's piano, the Pocket Philharmonic's valiant playing, Dottie Lester White's choreography-of-the-possible (the production is in the minuscule Florence Gould Theatre, after all), and some impressive performances, not all is well with this production.

Pocket’s singers often manage to do their best with Pippin and the orchestra behind them, but not on Saturday. There was a consistent tempo problem from the singers, as they tried — and failed — to keep up with the musicians. The disconnect ran through the entire performance, impacting even the otherwise clear diction (so essential to realizing Pippin's work). With the orchestra a half measure behind the singing and supertitles running ahead of both, there was too much perception- and information-processing required from the audience.

The other major problem, ironically, stemmed from the Pocket Opera debut of an exceptional young singer. Jillian Boye's Eurydice vied with the huge voices of Reed (Jupiter) and Martin Rojas-Dietrich (John Styx), and occasionally just blew them away. Boye, fresh from San Jose Opera performances, has a terrific voice, but no clue how to use it. It's astonishing that no music director or coach reined her in, and stopped her from scooping notes and Ethel-Mermaning, instead of allowing her perfectly lovely voice to do the work.

At the opposite end, Mendelsohn used a solid but unexceptional voice to its best advantage. He is also a wonderful comic actor. Reed and Rojas-Dietrich have both voice and artistry, ready to be used in much larger venues (but both wisely held back here). Donna Olson's arch Public Opinion, Kathryn Miller's frisky Cupid, Adia Griffith's Erda-ish Juno, and Jennifer Nadig's impressive Venus contributed mightily.