"Indigenous Instruments," composer Steve Mackey writes of one of his pieces, "is vernacular music from a culture that doesn't actually exist." But at UC Berkeley's Hertz Hall on Friday, the audience was able to catch aural samples of familiar vernacular music. Echoes of rock and jazz jostled with idioms of 20th-century art music in four works by Mackey, performed by Citywater and the Sacramento State Percussion Group. Such is the trademark style of Mackey, a rock-guitarist-turned-composer who has devoted much of his music to melding the many elements of his diverse musical past. 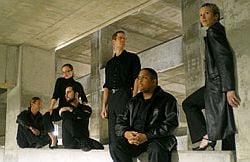 The first piece, Micro-Concerto, was an enjoyable primer on this new aesthetic and offered a sampling of the various sources from which Mackey has culled his musical language. The repetition of short melodic and rhythmic fragments characteristic of minimalism rubbed shoulders with the familiar timbres of cool jazz (the second movement is a solo for vibraphone with a pizzicato cello imitating an upright bass).

Tying the piece together was a veritable army of percussion instruments. In addition to the Pierrot ensemble of violin, cello, flute, clarinet, and piano, Micro-Concerto calls for vibraphone, marimba, claves, wood blocks, triangles, whistles, bass drums, bongos, maracas, kitchen utensils, and more. Percussionist Ben Prima shouldered the task admirably. Watching him cover the arsenal single-handedly was great fun, as well as a testament to the centrality of physical execution in Mackey's music.

One key component of Mackey's style is exploration. Once he comes upon a musical idea, he will linger on it for a while, examining its possibilities. Indigenous Instruments, for example, is built on a number of fixed ideas: Another elaborate percussion set accompanies a violin whose lowest string has been tuned down an octave, creating a low rumble, all underscored by ostinatos that bore the faintest hints of jazz rhythms. The combination of these things made for a clever sonic mobile, though at times the audience found itself simply listening to the music move from one player to another.
As the Note Bounces
All four pieces on the program also explored new ways of getting sounds out of conventional instruments. In two of the four pieces, tennis balls were dropped onto an upturned bass drum, producing randomized rhythmic tremors. Heavy Light calls for the flutist to blow into a bottle of water over a microphone. Some of these devices served their pieces well. In No Two Breaths, the tennis ball rhythms were a metaphor for the notion that, as Mackey mentions in his program notes, "no two breaths are the same."

At other times, these gimmicks weren't much more than elaborate and complicated methods of producing perfectly normal sounds. In an encore performance of Feels So Bad, a percussionist wielding a tambourine on a rope swung it erratically against the floor and whatever else got in its way. While it was exciting to watch, the aural results didn't sound much different than those from a handheld tambourine.

Heavy Light, the final piece of the program, saw Mackey donning the electric guitar. More than the other pieces, this one qualified as a true "crossover" work, as it blended art music with rock (1970s progressive rock, if I had to put a name to it). Over the same sorts of ostinatos and minimalist rhythms that characterized the other works, the composer indulged in a few guitar solo licks. The last movement features a recurring riff that could have come from A Farewell to Kings by the rock band Rush.

Mackey's reliance on a fixed set of ideas again weighed the piece down. Several gestures were repeated too often, growing weary on the ear. Still, this listener could appreciate the composer's enthusiasm and pride in his musical ideas, for, as any rock musician will tell you, a riff worth playing once is worth playing twice. Most refreshing was Mackey's unflinching use of thirds, fifths, and even triads — relics of an older musical language that many composers still can't bring themselves to use but that Mackey seemed happy to add to his bag of tricks.