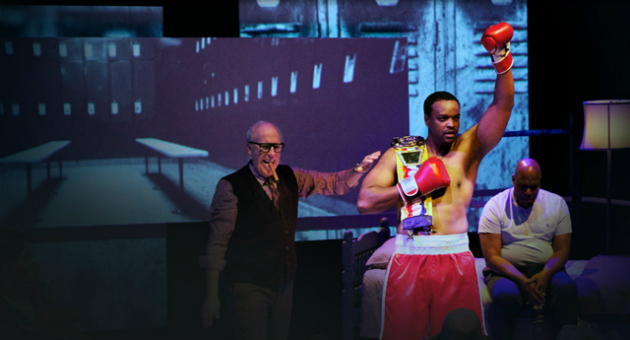 Fearless, graceful, full of sly musical feints and bravura dramatic feats, Champion – “An Opera in Jazz” scored a resounding triumph on its opening weekend at the SFJAZZ Center.  Anyone in doubt about the power of great music theater to reach and move an audience at the deepest levels must see and hear this remarkable hybrid opera, which continues through February 28.

Champion, which premiered at the Opera Theatre of Saint Louis in 2013, is a joint production by SFJAZZ and the invaluable Opera Parallèle. The opera takes as its defining center of gravity the aging and dementia-scarred prize fighter Emile Griffith, played and sung in commanding fashion by the sonorous bass Arthur Woodley.  The inspired fusion of Terence Blanchard’s score and Michael Cristofer’s libretto, based on the true story of Griffith’s rise and fall, sends us whirling backward and forward through the fighter’s hardscrabble Caribbean childhood, his move to the States, emergence as a welterweight (and later middleweight) champ and his grueling, long decline.

Two issues are tragically intertwined in both fact and this operatic transformation: Griffith’s sexual involvements with both women and men and his notorious 1962 match with Benny “Kid” Paret. Openly taunted by his rival as a homosexual (“Maricón!”) at the weigh-in, Griffith pummeled Paret (the nimble Victor Ryan Robertson) so hard during the fight that he went into a coma and died 10 days later.   In its patient but inexorable narrative, served by music molded from both a conventional opera orchestra grammar and the improvisatory lingo of a jazz trio, Champion builds to a wrenchingly beautiful catharsis of those events in its final scenes.

To get there, Blanchard and Cristofer build on the shimmering vulnerability of Woodley’s stoop-shouldered, achingly fragile Griffith. “This is my shoe,” Woodley sings in an early scene. “Where does it go?” It goes, comes the gentle answer that resonates like an existential throughline in the piece, “where it belongs.” Blanchard’s tremulous, translucent chords, echoed by David Murakami’s diaphanous projections, suspend Griffith in a kind of timeless void on an upstage platform of Dave Dunning’s stepped set. Woodley remains onstage for the entire evening, both subject and witness of the chrysalis-like transformations in Griffith’s life.

The first comes when he arrives from the Virgin Islands as a strapping adult, played by the physically imposing but somewhat musically undercharged Kenneth Kellogg. A reunion with his mother Emelda (a magnificent portrayal of selfishness and self-assertion by Karen Slack) goes awry when she can’t remember which of the seven children she left behind this one is.

When Emelda tries to get Emile a job as a hatmaker, the business-minded manager Howie Albert (an aptly gruff-voiced Robert Orth) spies a diamond in the rough and sets about making his new charge over as a boxer. Slack rejoices in a funny catalog number that celebrates Emile’s “eventuality, desirability, invincibility, undefeatability.” 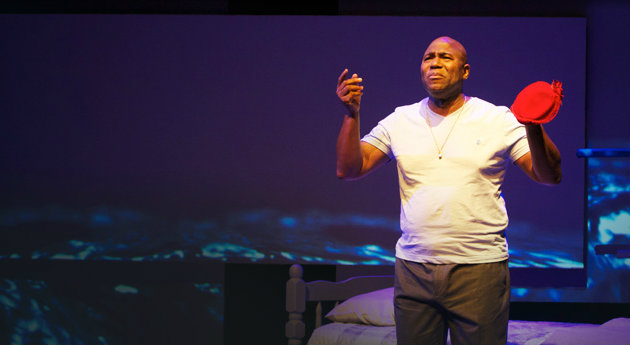 Champion unfolds in tellingly contrasting strokes. Old Emile’s musical lines have a stretchy, ruminative amplitude, while his ambitious younger self sings in a clipped, jazz-inflected cadence. In a flashback to the islands, the child Emile (sung with sweet, bell-like purity by Evan Holloway on Saturday night) offers up a murmurous meditation on his trials and forbearance. (Holloway alternates with Moses Abrahamson in the part.) Paret’s taunts come in mocking, sing-song melodies.

Both the well-made architecture and stylistic variety of Blanchard’s score grow more apparent in the second act, all of it deployed with her customary command by Opera Parallèle conductor and artistic director Nicole Paiement. Musical motifs that were planted early on, especially in the old Emile’s lines, develop more fully. There’s more ensemble writing, for duets and quartets and finally a full-cast deployment of soloists and a 12-member choir at the end.

Slack uncorks an arresting blues aria, accompanied only by the quizzical intervals and glides of Marcus Shelby’s bass, about the essential solitariness of life. “All that’s left is me,” she sings, with lines that soar and implode, then try again. An eerie ground bass for piano and softly plucked strings recalls the fateful tread of Dido’s farewell, in Purcell’s Dido and Aeneas, as Champion approaches its extraordinary climax.

A meeting between old Emile and Benny Paret’s son is the pivot point. Descending from the upstage bed he has occupied all night, Woodley approaches the young man with fear, confusion, and a desire for forgiveness. Emile thinks he’s meeting the long-dead Paret he fought instead of his son.  How right it is, then, that Benny Paret, Jr. is played by the same actor (Victor Ryan Robertson) who portrayed his father. Time, in a fulfillment of the opera’s theme, becomes a circle of yearning for deliverance. To its great credit, Champion never shrinks from the brawny ferocity of boxing and its transfixing allure. Nor does it sentimentalize or sermonize about the damage done to Griffith and countless other fighters.

Blanchard fills the house with the evening’s most unabashedly lyrical and expansive music, a chorus of pleas for resolution and release, for forgiveness and coming home. And then, silence. A slowly emptying stage. An embrace, a parting of the ways. Emile is once again alone with his divided self. “Only me, only you,” the lyrics go in this heartbreaking and deeply consoling moment, gorgeously captured in Blanchard’s music.

Almost everything about director Brian Staufenbiel’s production serves the cause. The set, with its ghostly fragments of a boxing ring at the four corners, is perfectly suited to the Center’s audience-surround seating configuration. The percussive patter of a boxer’s bag and his feet stamping the floor during a training session serve as seductively exciting preambles to the acts. A ringmaster (Mark Hernandez) supplies haunting wisps of narration. Only the projections seem overused at times, though they ratchet up the big fight scene with a febrile impact.

Champion has its sluggish passages, particularly in the first act. A generic aria about manhood is a misfire. And some of the crowd scenes go on too long without enough payoff. The playwright and screenwriter Cristofer, in his operatic debut as a librettist, may be a little too concerned with stating and restating his themes. But all is swept away and subsumed by the astonishing conclusion.

To its great credit, Champion never shrinks from the brawny ferocity of boxing and its transfixing allure. Nor does it sentimentalize or sermonize about the damage done to Griffith and countless other fighters. Like any fine opera, it uses its story as a lattice to explore the agonies and aspirations of characters that we recognize as essentially, profoundly human.