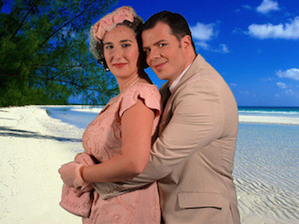 The potential trouble with Leonard Bernstein’s Trouble in Tahiti, one that you will not encounter in Opera Parallèle’s wonderful new production, is that it piles cliché upon cliché. Premiered in June 1952 at the composer’s Festival of the Creative Arts at Brandeis University, the 40 or so minute “Opera in Seven Scenes” wickedly demolishes the smiling façade of post-WWII suburban life, showing it to be hollow, empty, and filled with duplicity. Scenes of the wife spilling everything to a disinterested, Camel-puffing, pill-pushing psychiatrist as the husband toys with his secretary at the office and attempts to prove his manhood at the gym are as familiar as the ultimate cliché of suburban life: the garage filled with a Nash Rambler and Cadillac (both of which my family owned).

But as performed (April 26-28) in San Francisco’s acoustically open and direct Z Space by Opera Parallèle’s wife-husband team of Conductor/Artistic Director Nicole Paiement and Stage Director Brian Staufenbiel, and brought to life by an excellent cast and fine instrumental ensemble, Trouble in Tahiti shines as the engaging, moving, and oft-delightful romp that Bernstein intended.

Staufenbiel takes advantage of the venue’s flat, open floor to put his musicians (stage left) and singers on virtually the same plane. The latter stand either on the floor or on a raised, rotating platform that allows the props for the seven scenes to swirl before us as the cast of five cleverly negotiates its way through a physical and emotional obstacle course. Behind them is a projection screen upon which David Murakami, Sam Clevenger (what a perfect name!), and Tal Kamran’s clever video/media create a sometimes-animated, oft-droll backdrop. It’s simple, and it’s perfect.

Heading the cast are one of the Bay Area’s operatic blessings, baritone Eugene Brancoveanu (Sam), and bi-coastal mezzo-soprano Lisa Chavez (Dinah). So much has already been said about Tony-feted Broadway veteran Brancoveanu’s indisputedly handsome voice and energetic, give-all stage persona that what’s most important to note is that, in Chavez, Paiement has found a singer who vocally can hold her own vocally alongside his emotionally free and forceful projection.

What Chavez lacks, due to her tendency to enlarge her voice by adding a lot of “whuh” (for lack of a better term) to the middle of her voice as it ascends the scale into more traditionally operatic, vibrato-rich territory, is Brancoveanu’s consistently clear enunciation. Thankfully, much of Dinah’s music lies lower in Chavez’s range, where she allows sound and words to flow naturally. And if Brancoveanu’s face and larger-than-before body remain as pliable and expressive as ever, Chavez and Staufenbiel’s decision to have Dinah show her numbing pain via a single, blank expression both makes its mark and leaves you wanting a bit more. Nonetheless, the bottom line is this: She is never upstaged in duet by the whole megilah Brancoveanu, which is no mean feat, and she succeeds in touching the heart, upon which the production’s success depends.

Bernstein’s jazzy, pseudo-Greek radio chorus/trio shines in large part thanks to fabulous soprano Krista Wigle. Wigle has the pop idiom down cold, which means she is hot. Every facial expression and knowing smile, every move of hands and hips, and every inflection are as knowing and idiomatic as they come. Lighter tenor Andres Ramirez is close behind, perhaps overdoing the hipster a bit but singing in a swinging, engaging manner. Handsome baritone Randall Bunnell is far more laid back, but his smooth voice blends wonderfully with his colleagues. It’s a great trio, one that would have been at home just before TV, and then TV politics, changed American life forever.

Into the midst of suburban malaise Bernstein throws the fictional movie, Trouble in Tahiti. As Dinah sits in a movie theater, then sings “What a Movie!”, Staufenbiel and his video/media design team have a ball. I’m not going to give it away — if any reviewer starts to describe the footage, stop reading unless you don’t plan to attend — but this little projected scena, filled with as many clichés as the radio trio’s recurring rendition of “The Little White House in [Scarsdale, etc…]” — the precursor to Malvia Reynolds’ Daly City-inspired “Little Boxes” — is not to be missed.

Because Bernstein’s sly little assault on suburban stagnation is so short, Opera Parallèle precedes it with Samuel Barber’s extremely succinct Hand of Bridge. Starting seamlessly from pianist Keisuke Nakagoshi’s rendition of Satie’s most oft-played Gymnopedie, the scenario by Barber’s partner of sorts, Gian Carlo Menotti, brings Sally (Wigle) and Bill (Ramirez) together with close friends Geraldine (Chavez) and David (Brancoveanu) for the game beneath the game of bridge. Again, the façade is shattered as the four protagonists sing of the hands they dare not show — the fantasies that preoccupy them as they try to escape the mundane. As Geraldine fixates on her dying mother, David fantasizes sex with another woman, and so on. It’s neither as biting nor as musically engaging as Bernstein’s sparkling success, but as a prelude to Trouble, it’s perfect …

As is the evening. Don’t miss it.