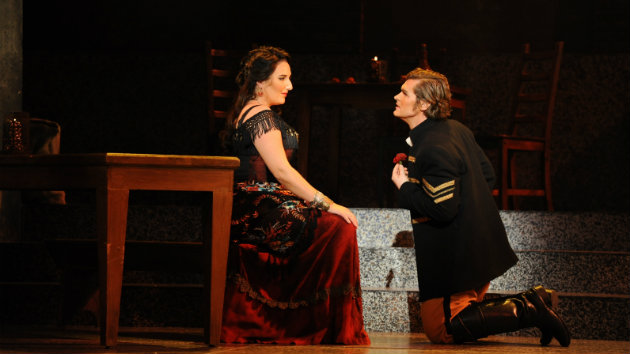 It's hard to attend a new production of Carmen, without thinking of the opera neophytes who may be in the audience. You want a production that lowers barriers and goes for the dramatic jugular.

Opera San Jose’s Carmen, which opened on Feb. 13, fits the bill sufficiently. It serves Bizet's familiar music with powerful voices and some lovely, if inconsistent, playing from the orchestra. The drama was clearly played, though lacking a measure of intensity. The costumes were spectacular.

Stage director Layna Chianakas' thoughtful production uses a lot of coordinated movement, especially for the chorus. The visual part of the evening began with a boy supernumerary, clad in black velvet, finding a red carnation on the ground and continued with dancers Gabriel Mata and April Shippen in a duet. The dancers appeared to represent Carmen and Don José, and foreshadowed the plot just as the overture introduced the main musical themes of the opera. The mysterious boy reappeared at several key moments, for instance giving the flower, which figures in the plot of the opera, to Carmen.

The three principals were not subtle but sang with power. As Carmen, Lisa Chavez was sultry and disdainful. Her voice is very loud and her performance was strongly physical and easy to read. Our Don José, Kirk Dougherty, has a bright sound without much nuance and seemed enraged from the beginning. He appeared to be singing against Micaëla rather than with her in "Parle-moi de ma mère!" This style worked a lot better by the end of the opera, and Dougherty did appear appropriately shattered in  "Ah! Carmen! ma Carmen adorée!." Baritone Matthew Hanscom's Escamillo was less than dashing and his voice seemed to disappear when trying to reach the difficult low notes of the part.

Soprano Jennifer Forni as Micaëla had some shrill high notes but came across like a sweet, naive girl. However, bass Kirk Eichelberger played Zuniga to a tee and sounded imposing.

The supporting cast were most impressive, and the smugglers’ quintet "Nous avons en tête une affaire" in Act II was utterly charming. As Dancaïre, Eugene Brancoveanu had a wonderful stage presence and a lovely, warm voice, which was a particular pleasure. Brancoveanu was well-matched with Michael Boley (Remendado) and Christine Capsuto (Frasquita). Capsuto was also excellent with Cybele Gouverneur (Mercedes) in Act III when they are reading their fortunes. 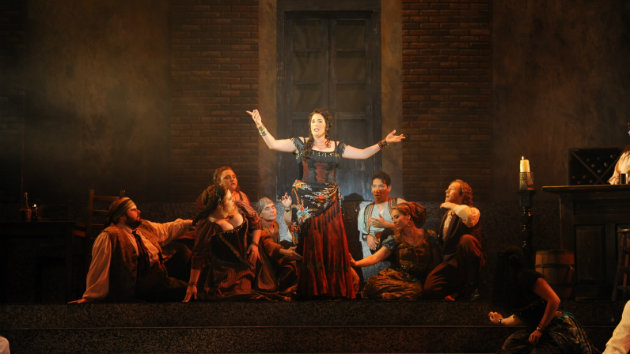 Raphael Boumaila's choreography was animated but occasionally looked artificial. The sets, from Giulio Cesare Perrone, were serviceable and descriptive. There were arches, steps, and rocks that could have been repurposed from numerous other operas. It was the costumes, however, coordinated by Alyssa Oania, that did the heavy lifting. Detailed with ruffles, lace, and embroidery, the sumptuous colors and fabrics were evocative of the time period.

The chorus occasionally sounded diffuse, especially at the beginning. Perhaps they were overwhelmed by the staging: The chorus members had a lot to do and mostly carried it off. However, the rhythmic clapping and stomping at the beginning of Act II must be exact and it was not.

Joseph Marcheso led a placid orchestra that had moments of great beauty and those that were distinctly less so. On the whole, their playing and attention to the singers could have used a lot more synchrony; the orchestra and the singers were often not together.