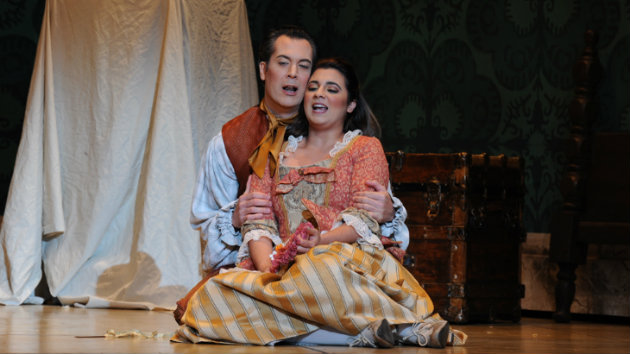 Opera San José's latest production of Le Nozze di Figaro, staged as a comic farce, has a lot of things going for it: It’s an entertaining crowd-pleaser with a fine cast. The Saturday, Nov. 14, performance, however, missed the mark dramatically and emotionally, because of stage direction focused insistently on gags.

The production looks conventional on the surface — the set evokes Moorish Spain in its architectural details and features the normal, late 18th-century time period in furnishings and costumes. It is all pretty and simple and the set changes go easily.

Stage director Lillian Groag has a ton of ideas. Arlecchino — the Commedia dell'arte stock character known as Harlequin in English — appears skipping, going through mirrors, and chasing chickens. It is not completely obvious why he’s there -- the character is evidently a double for Figaro -- but Ryan Sammonds moves with grace.

Another silent addition to the stage is the villainous Madame Defarge (played by Kaitlyn Tooker) from Charles Dickens' A Tale of Two Cities, menacingly knitting throughout the evening, her list growing with characters from the opera. 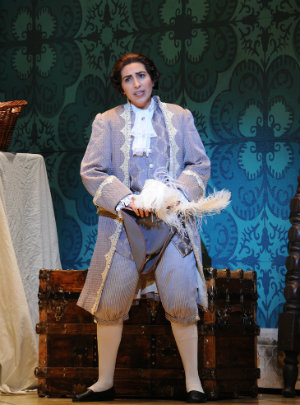 There were lots of sight gags: An especially salacious one happened during Cherubino's first aria ("Non so più cosa son") wherein a hat is balanced on the character's apparently aroused groin. All the more hilarious given this is a trouser role, and it got laughs, to be sure.

It is difficult to empathize with the characters as played here, they are so silly and one-dimensional. The problem with the constant slapstick on stage is that it robs the end of any emotional import —  we don't truly feel the Count is repentant or that the Countess has forgiven him.

The production did keep the chorus members tightly blocked, which is always a good thing. But the over-the-top acting clearly was part of the director’s concept.

Ben Wager impressed as Figaro in his Opera San José debut, showing off a warm voice. His lower register has interesting textures to it. Amina Edris (Susanna) matched him well and was feisty both vocally and physically.

Matthew Hansom (Count Almaviva) sang with brawn and might and plainly portrayed the frustration of this character. Isabella Ivy was more impassive as the Countess but her voice has a crystalline quality that is ravishing.

Rounding out the cast are a number of expressive singers including an icy-voiced Cherubino (Karin Mushegain) and a distinctive Don Basilio (Michael Dailey). Mushegain was constantly on the move and channeled the energy of a hyperactive child; her face is communicative. Dailey was quite the dandy, and he shakes in terror rather convincingly in Act I, when he realizes the Count has overheard him gossiping.

Maestro Andrew Bisantz had trouble keeping everyone together in his house premiere, and the tempos were rushed. The orchestra raced ahead of the singers. Mozart leaves little room for error, and here there was often complete chaos. While the violins were more in tune than in recent memory, they would occasionally play out at the wrong times. The woodwinds were the most consistent, and had some pretty moments.

While appealing, the performance was marked by a distinct lack of gravity that comes from bouncing back and forth between the various funny but ultimately superficial quips and tics happening on stage. Without the music to come to the rescue, it was much like watching a cartoon version of the opera.