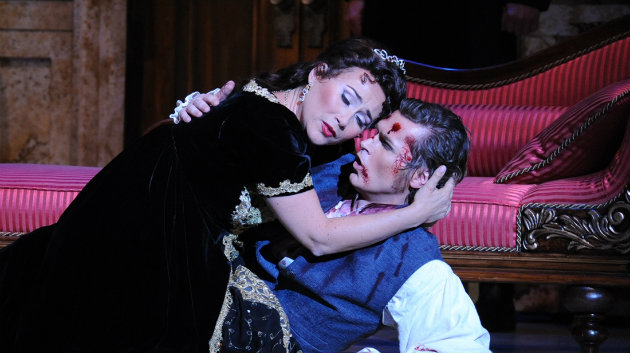 While Opera San José's colossal neighbor to the north opened opera season last weekend with a Verdi rarity and a Broadway musical, the South Bay company started its 32nd year on Sept. 12 with that most quintessential of operas, Puccini's Tosca. And what a joy it was to hear and see this gripping piece with its timeless human conundrums, performed so well.

Like most Puccini operas, Tosca hinges on having a fine soprano in the title role, and at OSJ does it ever. Olga Chernisheva is a sympathetic Tosca — utterly lovable, coy, and fierce, depending on the situation.

You didn't need to know a word of Italian to know what was happening and how Tosca felt. Chernisheva’s dark, tawny sound also is distinct and her dazzling high notes are piercing without being ugly. It was all the more impressive that her Sunday matinee performance was so strong, after she had sung the opening night less than 24 hours earlier. Her “Vissi d’arte” (I lived for art) was riveting. Soprano Elizabeth Baldwin, who sings Tosca in the last two performances at the end of the month, has her work cut out for her to fill Chernisheva's shoes.

The rest of the singing was perfectly nice, and visually the young cast drawn from the resident company was convincing. Tenor Kirk Dougherty (Cavaradossi) strained a bit but could always be heard. He was plaintive and appealing, especially in Act III's "E lucevan le stelle." Matthew Hanscom hammed it up as Scarpia and was almost cartoonishly evil as he strutted on stage, but this did not detract from his powerful voice or the villainous role. 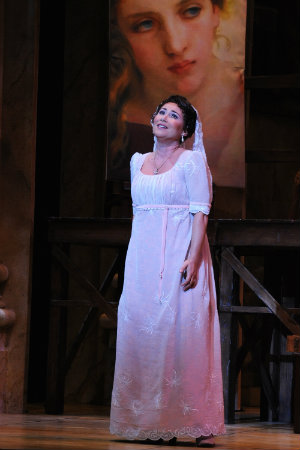 The orchestral playing, under Music Director Joseph Marcheso, was speedy and loud. At times it was hard to hear the principals in the smaller roles, though the chorus was full and cohesive. The woodwinds and brass played lucidly. The strings struggled to stay in tune, most notably at the beginning of Act III, where they were exposed and neither in tune with each other or anyone else.

The staging was perfectly traditional, the costumes were richly detailed, and all the sets looked plausible, though perhaps it would have been better to have a window in Scarpia's apartment. Instead stage director Brad Dalton resorted to mime downstage, which was disconcertingly abstract in an otherwise realistic production.

The regional nature of the opera company came out at other times as well — the stage is on the small side, and the singers often got to their marks early and had to wait for musical cues. The slow removal of scaffolding in the second half of Act I was not well-motivated, and it did not make sense that Attavanti's portrait stayed on stage, except that Dalton wanted Scarpia and Tosca to interact with the painting. This wasn't strictly necessary and was awkward. Puccini shows the nature of these characters in the music and the drama already.

It was lovely to see such a lot of people so happy to be attending a classical music performance and paying such close attention to the gorgeous singing. The production won a lot of fans, as the final ovation demonstrated.