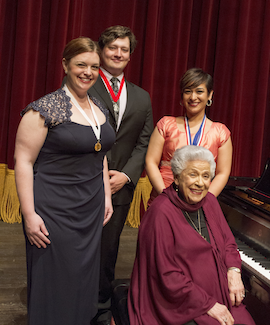 Some of the finest singing that has graced Bay Area stages this year distinguished the finals of the eighth annual Irene Dalis Vocal Competition. Presented in Opera San Jose’s California Theatre on Saturday May 10, the afternoon was the culmination of the concomitant West Coast Auditions for Singers, which drew 83 artists from throughout the United States to San José on May 8-9 in hopes of securing gigs in the region.

Each contestant provided a list of 5-6 possible arias. They chose the first aria; the three judges, who were often looking for contrast, chose the second. The payoff, in addition to invaluable publicity, included sizeable cash prizes: one $15,000 award, one $10,000 award, two $5000 awards (Third Place and Audience Favorite), and seven $2000 awards to the remaining finalists.

The competition’s originator, former Metropolitan Opera star Irene Dalis, 88, has just retired as general director of Opera San José, which she founded in 1984. Given that Saturday’s competition served as a culmination of the three-decade leadership role Dalis has played in the cultural life of the Bay Area, the choice of judges held great import. Each one — soprano Eilana Lappalainen, a famed Salome who has performed title roles at more major houses than you can name in one breath; tenor Dan Montez, now a stage director and composer; and bass-baritone Douglas Nagel, who continues to sing while teaching and serving as artistic director of Rimrock Opera/ the Nova Center — was the first resident artist of their voice type at Opera San Jose.

Tenor Rober Watson’s “Ah, la paterna mano” (Macbeth) was of heroic proportions, the undertones as impressive as the sweetness on top. The top is where he is headed, sooner rather than later.

López possesses an inherently beautiful, absolutely secure voice that opens on high to reveal a wealth of dramatic, heart-tugging colors. She may have sounded a bit shallow in her low range during “Dis-moi que je suis belle” (from Jules Massenet’s Thaïs), but she was the only female singer who could turn on a note artfully, soften and sweeten, sing with some degree of rhythmic freedom (in her well-timed opening to “Ah! Fors’è lui … Sempre libera”), and truly touch the heart. Only once did she simplify the coloratura in Violetta’s cabaletta before nailing a perfect high E-flat for considerable length. If there is any weakness to her technique it is that the undertones in her dramatic vibrato tend to compete with, and occasionally overwhelm, the leading edge of notes higher in her range.

My personal favorite, tenor Robert Watson made his San Francisco Opera debut as a noble in Lohengrin in 2012, and created the role of Mr. Cox in the world premiere of Tobias Picker’s Dolores Claiborne. A sensation as the Male Chorus in last summer’s Merola Opera production of The Rape of Lucretia, the student of César Ulloa brought thrilling gravitas and authority to “I know that you all hate me” (from Gian Carlo Menotti’s The Saint of Bleeker Street). His “Ah, la paterna mano” (Macbeth) was of heroic proportions, the undertones as impressive as the sweetness on top. The top is where he is headed, sooner rather than later.

Birkland was a dramatic, take-no-prisoners powerhouse in Azucena’s “Condotta ell’era in ceppi” (Il trovatore) and an ear-opening Brangäne in “Einsam wachend in der Nacht” (Tristan und Isolde). Although her lower tones had all the gravitas one might desire, a tendency to favor strength over beauty and majesty — a quality that Brangäne needs — undoubtedly relegated her to third place.

Duchovnay, who will sing in West Edge Opera’s forthcoming production of Glass and Ginsberg’s Hydrogen Jukebox, sang with a bright and secure top, and winningly youthful, albeit one-dimensional, excitement. Suits exhibited beautiful head tones and depth of feeling, but her strange extra trills at the start of “Caro nome” (Rigoletto) could not mask an inadequate trill at the end and aria conclusions that fell flat. Despite her shallow low range, Vargas shared a luscious, statuesque grandeur, but was far too monumental for Charlotte (in Massenet’s Werther).

Opera lovers would be wise to add the Irene Dalis Vocal Competition to their list of annual must-sees. There is no question that several of the artists who held forth in San José will receive international accolades in short order.