Irene Dalis’ final season as General Director of Opera San José, which she founded 29 years ago, has so far produced two consecutive successes. Its current production in the opera-friendly acoustic of the California Theatre, Engelbert Humperdinck’s Hansel and Gretel, overflows with musical and visual delights that are only amplified by Marcie Stapp’s lithe, English language translation.

That Humperdinck’s masterpiece is so often framed as a Christmas holiday children’s opera is in some ways unfortunate. Not only is the sweep of its music, modeled after German folk songs, remarkably sophisticated, but its power to enchant adults as well as children also remains as strong today as it was when Richard Strauss conducted the world premiere in Weimar in 1893.

In this production, rather than emphasize the story’s dark side — the evil witch, after all, entices children with “white death” sugar treats, after which she hypnotizes them, enslaves and fattens them, and bakes them into gingerbread people — Director Layna Chianakas and set designer Larry Hancock take a happy, fairytale approach. The setting is a beautifully colored forest, in which trees and branches curve and incline in ways that delight rather than frighten. Seen at the opening matinee with its second cast, the witch, hilariously costumed by Elizabeth Poindexter and wigged out by Jeanna Parham, is a ridiculous drag queen (James Callon) whose bulk leaves him no match for lithe and light Hansel (Kindra Scharich) and Gretel (Sara Gartland). Even the smoking oven, complete with lights that double as a metallic monster’s eyes, appears more droll than menacing. There’s little to fear here, and a whole lot to enjoy. 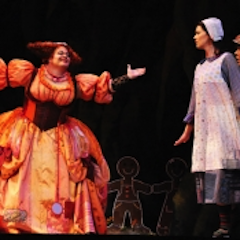 Chief among the delights is Maria Basile’s choreography. Not only are she and Hancock able to elicit a goodly amount of curling, rolling, twirling, dancing, and gesticulation from Scharich and Gartland, but they also create the production’s visual high point during the gorgeous extended orchestral finale to Act 1.

As conductor Joseph Marcheso encourages his fine players to pull out all the stops, two gifted dancers, Hannah Vaughan and Gabriel Mata, take Hansel and Gretel’s places for an extended, infinitely enchanting and perfectly executed dream sequence. Every element of this scene, including the children’s chorus of 14 angels and the beneficent countenance of Mother Nature (Rita Elisabeth Horiguchi), whose winning smile is reminiscent of the late Beverly Sills in happy hostess mode, is a success.

In the second cast, which returns Nov. 23, 26, and Dec. 1, not every voice seemed tailor-made for Humperdinck’s fantasy. As wonderful as it was to again enjoy former Adler Fellow Gartland act up a storm and flash her winning smile and eyes in her welcome OSJ debut, her absolutely secure voice seemed far more suited for a calculating femme fatale than a fresh, young quasi-innocent. She had to work hard, in her angelic “Evening Prayer,” to lighten enough for a sweet high G. To her credit, she succeeded, but most of the time, her vocal coloring bespoke the seductress within.

Scharich scored a solid 10 as little butch bundle of joy, but her method of fattening her voice higher in the range not only masked enunciation, but also created a sound too mature for a child. She blended wonderfully with Gartland lower down, but higher up, as her voice spread horizontally while Gartland’s pointed vertically, Hansel and Gretel sometimes went their separate, albeit in tune ways.

The maturity of their mother’s (Buffy Baggott) sound was appropriate, but not the borderline shrillness of its top. Questions also arose for the Sandman (Antonia Tamer), who was far too vibrato-rich operatic for such a sweet spirit, and the Dew Fairy (Christine Capsuto), whose voice was kissed with dew only at the very top of its range.

Two cast members fit their roles perfectly. As the father, Krassen Karagiozov’s handsome, full-toned singing and winning physicality seemed ideal for a conception that downplays drinking and parental harshness in favor of joy-delivery. And witch Callon, the only member of OSJ’s Resident Company in the second cast, played and sang his part to the hilarious hilt.