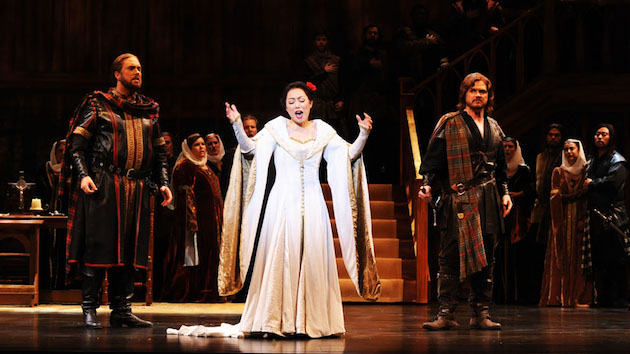 While other smaller opera companies in the Bay Area have taken on inventive productions and adventurous repertoire, Opera San José remains true, for the most part, to the core warhorses, as with the rather traditional staging of Donizetti’s Lucia di Lammermoor that opens its 2016-2017 season. But what a case the company has made for such a tack: The show breathes with wonderful musicality, simple and direct acting, and plenty of vocal fireworks that underline the “bel” in bel canto.

Benjamin Spierman’s neat production simplifies the scenes by representing the Scottish highland with basic Romantic elements, such as mossy rocks, trees, and ruins, with details that suggest the settings like a fountain in Act I Scene 2 and gravestones for Act III Scene 3. The castle interior is a paneled room with a staircase and a doorway, making scene changes quick and easy.

His direction was likewise straightforward. The singers interact fairly naturally, but do get to comfortable places downstage to sing without having to do anything complicated or odd. Only Arturo, played by tenor Michael Mendelsohn, was much of an innovation. Lucia’s hapless bridegroom was a ham here, an older, pompous man who made eyes at her handmaid, Alisa. This motivates the drama of the piece but also gave some comic relief to the serious and bloody events ahead. 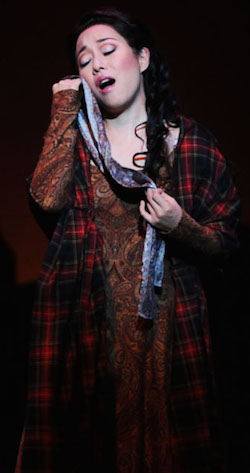 The singing was beautiful. Soprano Sylvia Lee played the title role, and what an impressive company debut she made. Her acting was completely engrossing, her sweetness which is crushed into derangement, was utterly convincing. She couldn’t be kept from sharp objects in her mad scene; Arturo’s dagger had to be taken from her twice, and she even swiped her brother's sword. The sight of the dainty soprano threatening men twice her size could easily have been humorous, but she pulled it off through her intensity and commitment.

Her voice is resonant from top to bottom and without a hard edge or a hint of shrillness. She attacked the coloratura passages with clarity and ease, yet was expressive. Her voice alone is well worth the trip to the South Bay and what a pleasure it is to see such an impeccable performance of an iconic role.

One of the fun things about Opera San José is that it boasts a resident company of young singers, and hearing them develop over many performances is gratifying. Baritone Matthew Hanscom, who has been a cartoonish actor in the past, was much more interesting as Enrico. His powerful sound did well for the angriness required in the role, but he was able to temper his vigor and truly seemed regretful in the end. Tenor Kirk Dougherty, who has a sturdy voice but an effortful manner, was reasonably suited for the plaintive and luckless Edgardo.

New to the residency is bass Colin Ramsey, whose voice is light and reedy. His Raimondo was more elegant than authoritative.

Conductor Ming Luke led the orchestra with sensitivity. The dynamics were nuanced and the tempi fluid. The harp solo in Act I Scene 2 before Lucia’s “Regnava nel silenzio” (Silence reigned) was lovely, and the flute in Lucia’s Act III mad scene also played soulfully. There was some fuzziness in the brass at the beginning of Act III Scene 2, but no obvious bloopers. There were brief moments when the orchestra got ahead of the chorus, which otherwise sounded cohesive. Still, this production of a beloved classic was a great barometer of the company’s value to the South Bay community. 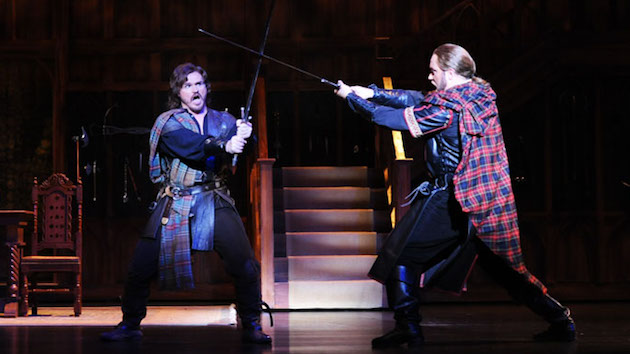