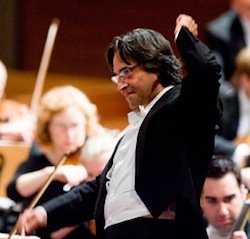 At the Chicago Symphony concert in Davies Symphony Hall on Wednesday night, I had a flashback fantasy to 99 years ago. The place: Théâtre des Champs-Elysées, and Pierre Monteux standing in amidst the chaos that greeted Le Sacre du Printemps, searching the audience for Stravinsky, 31, to take a bow (or shield him against thrown objects), but not finding him.

In last night's reality, Riccardo Muti — a man of total certainty at all other times — stood on the stage, peering around, making awkward gestures, and looking puzzled. The audience was unrestrained, just as their counterpart in Paris, but in a good way: Those in attendance were engaged in the first half of a standing ovation, waiting for the composer of Night Ferry to receive the full measure of appreciation.

Minutes went by, that felt much longer, until the composer finally made it to the stage, with Muti wagging his finger like an Arizona Governor. Anna Clyne, who will turn 32 on March 9, but looks a young 20-something, pointed upstairs, indicating the difficulty of making it from the SFS VIP box to the stage. Might some misguided, agist usher have blocked her way?

The Standing O is coming entirely too frequently to Davies Hall, and on the night before, after the Chicago's brilliant performance of another brand-new work, Mason Bates' Alternative Energy, it was even longer and more fervent. But the reception by most of the audience for Clyne's work had my wholehearted agreement. 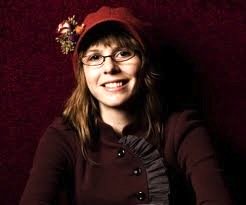 Although Night Ferry has none of Rite's startling, pathbreaking novelty (in its time), I heard in it Stravinsky's driving, unapologetic pulsing of power. Clyne opens the work with a tremendous outburst of energy — tailormade for this orchestra — and then, instead of pulling back, the force of sound is sustained, even increased.

There are some beautiful, gorgeously dissonant, Straussian passages, but not the result of the transparent calculation, the customary loud-soft variation. Rather, everything in its logical, appealing place, carrying the listener along irresistibly. No recording of the work yet exists, but if you want to sample Clyne's music, look on her website. (A quick survey there found nothing approaching the excellence of Night Ferry.)

Clyne's program notes speak of poetry, Schubert, cyclothymia, and of going through "the ungovernable and dangerous," but I heard the work as abstract music, was able and willing to provide my own images — or nothing at all. And, most importantly in case of any new music, I want to hear it again, and soon.

The "Night" part of the title is somewhat misleading. It's virtually the opposite of nocturnal music, except perhaps invoking night terror. Extra kudos to Clyne for resisting a "happy ending"; her integrity and honesty remained consistent. Muti and CSO played Night Ferry with love and brilliance, their dedication to the composer palpable and producing result. 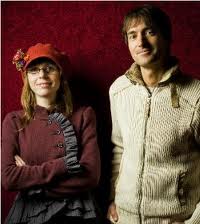 These were two thrilling evenings: a great orchestra, led by a superb conductor, presenting two fascinating new works, and textbook (but vibrant) readings of evergreen classics. Some of the highlights:

Through both concerts, Muti's marvelously hands-on, total and constant involvement with every element of the music, every member of the orchestra amazed and delighted. All solo passages, by concertmaster Robert Chen, woodwind and brass players were right on the money. For those who think, mistakenly, that critics must criticize, this report must be a disappointment, but so be it. At both concerts, I kept clicking on the "like" button, even though not a Facebook user.