Contemporary composers are like presidential candidates: A few front-runners get all the attention while others languish at the margins of recognition. And then there are the two major "parties," the American and the European. How does a composer from Latin America stand a chance?
Armando Castellano founded Quinteto Latino to provide such chances, having grown up in a U.S. classical music environment that offered little of relevance to his heritage. Saturday, he and cohorts devoted the bulk of a Trinity Chamber concert in Berkeley to a Mexican composer little known here, Mario Lavista, and the exposure left me fascinated and anxious to hear more. 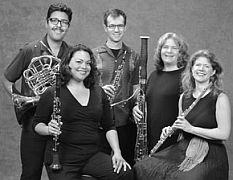 Lavista's works on the program all displayed a distinctive style, maturity, and mastery that put him far ahead of the pack of so many gray American composers who effuse competent but stylistically interchangeable opuses. Lavista's music has absorbed contemporary trends, but rather than revolutionize beyond them, he has chosen the inward path, to focus all on a unique and indefinable essence of a mood and its corollaries, thus creating a new universe within rather than without the old.
Haunting Melismas
Lavista's means are simple, yet the results are haunting, revealing a gentle obsession with tones and overtones. For the tones themselves, he concocts melismas that hover above and below favored pitches, with leading tones and melodic directions that magically add emphasis to these pitches via their psychological anticipation. Rather than the composer having to actually sound the notes frequently, onboard listeners will keep them buzzing in their minds instead.

Then there are the overtones. In the first work on the program, Marsias (1982), a glass harmonica of six wine glasses and four players provided ethereal tones and overtones that came and went like clouds while Kyle Bruckmann's oboe ran its plaintive course. In Madrigal (1985), Leslie Tagorda's extended techniques on solo clarinet produced multiphonics and glissandos with associated overtones in the slower passages that conjured up a vision for me of a longing to dive between the notes in a back-to-the-womb manner. In the third piece, Responsorio (1985), pairs of bass drums and chimes mysteriously accompanied Beverly McChesney's bassoon.

I was beginning to feel I was more at a séance than a concert.

After intermission, however, a change of composer to the Argentine Christian Baldini snapped me out of my reverie, even though Castellano's reading of a poem by Octavio Paz referred to hearing "the beating of the light of the other side." Baldini's Este lado (This side) for wind quintet seemed conventionally contemporary and pedestrian. But then Lavista's Danza de la bailarinas de Dégas for Diane Grubbe's flute bought back the special mood, followed by the full quintet (with Castellano on the horn) playing Lavista's Cinqo danzas breves (1994).

With the larger ensemble, impressionistic chords were more in evidence. The melismatic hovering occurred in the first dance with a Sunrise, Sunset–like tune that was passed among the members of the quintet. The second dance offered sprightly and ever-changing meters, but two of the remaining numbers were so slow and beatless they could hardly be characterized as dances, hypnotic as they were nevertheless.

The encore was José Luis Hurtado's arrangement of a minor-key folk waltz heard by Castellano in Veracruz, La bruja (The witch). This number, not too far removed from mariachi/jarocho, brought me back to earth with a smile — all ready to vote for any third-party candidate.