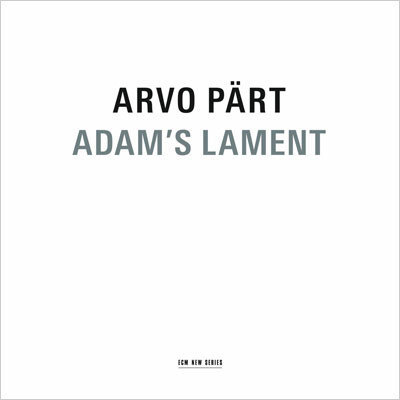 Adam’s Lament has fascinated Arvo Pärt for at least two decades. Back in 1992, the already-world-renowned Estonian composer had sketched a massive, 90-minute production for choir, orchestra, and vocal group bearing that title, based on the 19th- and 20th-century Greek Russian Orthodox monk St. Silouan’s poetic setting of the biblical Adam’s anguished reaction to his expulsion from Eden. The Oregon Bach Festival commissioned the work for its 1994 season, but Pärt succumbed to an artistic crisis and abandoned it.

The festival wound up premiering his shorter and simpler Litany that summer, instead, and Pärt went on to write other laments, plus a Silouan setting (1991’s Silouan’s Song). But evidently, that despairing text from Genesis continued to haunt him, because the grimly portentous title track of Pärt’s new CD rumbles with the dread and anguish that pervade the monk’s text (sung here in church Slavic), which slowly builds, rushes to a powerful climax, and ends, quietly, with a prayer — not for transcendence or strength, but rather for humility.

The composer also gazes backward in the works that follow the title piece, revisiting music he wrote as long as two decades ago for other instrumental combinations and rescoring them for chorus, woodwinds, and strings. As with Adam’s Lament, Beatus Petronius, a striking Salve Regina, and a fiercely dramatic Statuit Ei Dominus all expertly capture the emotional thrust of their respective texts — submission to the Creator’s will, and calls for help, for mercy, for peace and dignity.

The title track rushes to a powerful climax and ends quietly, with a prayer — not for transcendence or strength, but rather for humility.

Recorded (with Pärt’s active participation) in the reverberant 13th-century church of St. Nicolai in Tallinn that surrounds the singing with a hazy echo, the album conveys a feeling of partaking of ancient religious rites in a sacred space. As ever with Pärt, the music often uses relatively simple means to deep and penetrating effect, usually imbuing the texts with high drama.

After the powerful opening sequence of dark, sometimes even distant music, it’s a relief when some less-austere passion finally arrives in new choral versions of 2004 works originally written for cello octet and voices: the brief, relatively cheery Alleluja Tropus, and the album’s most ravishing work, L’Abbe Agathon, based on the parable of a man who helped what he thought was a leper, only to learn that his compassion was instead being tested by an angel, with ecstatic passages piercingly voiced by soprano Tui Hirv.

The mood lightens further in a pair of concluding lullabies, recorded at a different church and coming from a seemingly different world than those darker opening pieces, one in which the ultimate ruler isn’t the Lord — but the heart.