Guitarists Alexis Muzurakis and Susana Prieto, the Duo Melis, have a stellar reputation in Europe and are beginning to extend their reach into North America. Their Bay Area debut on Saturday in Herbst Theatre, a copresentation by San Francisco Performances and the Omni Foundation for the Performing Arts, revealed an ensemble notable for sensitive musicianship, virtuosic panache, and stylish performances of music ranging from French Baroque composer Jean-Philippe Rameau's programmatic Call of the Birds (1724) to contemporary composer Dusan Bogdanovic's extraordinary synthesis of classical, avant-garde, and ethnic influences in his Sonata Fantasia (1991). 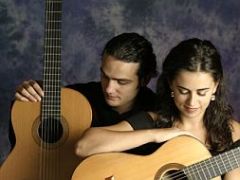 The fiery passion and brilliant orchestration of the Danza española #2, Danza de los vecinos (The neighbor's dance), and Danza de la molinera (The miller's dance) were well-represented in the outstanding arrangements and performance of the Melis Duo. The constantly shifting textures of rasgueados (strummed strings), counterpoint, and percussion, a wide-ranging use of a multitude of colors, and an almost clairvoyant fluctuation of tempo made for an exhilarating opening.

Antoine de L'Hoyer, a French guitarist and composer active in Saint Petersburg, Hamburg, and Paris, published his works for six-string guitar between 1813 and 1826. Much less well-known than the works of his guitarist contemporaries Fernando Sor and Mauro Giuliani, L'Hoyer's compositions have just begun to be explored by modern guitarists.

I find many large-scale guitar works of the early 19th century to be uninteresting, and admit to having been dubious on seeing L'Hoyer's three-movement Duo Concertant in A Major, Op. 31, listed on the program. But the music was fresh and original, reminiscent of Haydn, and the marvelous performance was clear, heartfelt, and witty.
Playing Both Passionate and Tender
Astor Piazzolla, an Argentine composer and bandleader, was the great modernizer of tango music. After a thorough grounding and a distinguished career playing traditional tango, Piazzolla began to compose in his own distinctive style, which fused Argentine tradition with his love of classical music, Stravinsky, American jazz, extreme chromaticism, dissonance, and even noise. His work Las cuatro estaciónes porteñas (Four seasons of Buenos Aires) pays homage to Vivaldi's Four Seasons and also brings out the differences between the music of Baroque Europe and contemporary South America.

Piazzolla's music does not portray thunderstorms, birdsong, or rustic dances, and the climate of each season features the same thick air, highly charged with sensuality. The Melis Duo played its own transcription of Otoño porteño (Autumn in Buenos Aires) with both violent passion and wonderful tenderness.

Jean-Philippe Rameau was one of the greatest figures in French musical history and one of the most respected composers of the 18th century. He composed many works for harpsichord, both in traditional Baroque dance forms and also in magnificent, descriptive movements drawn from nature and from the theater. Duo Melis performed one of his elaborate and courtly allemandes, as well as three genre pieces.

Le Rappel des oiseaux (The call of the birds) is a rondeau, which imitates birdsong with elaborate figuration and ornamentation. Les tendres Plaints (Gentle tears) evokes a mournful mood with a slowly falling melody. Les Cyclopes was inspired by Lully's portrayal of the mythological one-eyed giant and features what Rameau called roulements (rapid-scale passages) and batteries (quick, disjunct figuration). The rhythmic flexibility, precision, and rapidity exhibited by Duo Melis in playing this elegant repertoire were exhilarating.
Music Evocative of the Grasslands
Alberto Ginastera, like Piazzolla, was an extremely important Argentine composer who developed a powerful and personal synthesis of national idioms and modernist techniques. But while Piazzolla found inspiration in the urban tango, the inspiration for Ginastera's Danzas Argentinas was in the music of the countryside. In Danza del viejo boyero (Dance of the herdsman) Ginastera sets a straightforward dance in a cacophonous mixture of musical modes and ends on a chord E-A-D-G-B-E that is identical to the open strings of the guitar.

Born in Yugoslavia and long active in the Bay Area as a composer, guitarist, and improviser, Dusan Bogdanovic has developed a style that is a unique synthesis of classical, jazz, and world music. He studied composition at the Geneva Conservatory with Alberto Ginastera and currently divides his time between composing, teaching at the Geneva Conservatory of Music, and concertizing.

His Sonata Fantasia is a three-movement work full of intense expression and formal complexity. It combines percussive effects, biting harmonies, syncopated rhythms, and elements of Indian music. Duo Melis performed the note bends, ornaments, and percussive effects with a grace and passion that brought the recital to a splendid conclusion reminiscent of its exciting opening.