[email protected]'s survey of music history arrived triumphantly at 20th Century Unlimited over the weekend. Program IV, "The Rise of Modernism," shone with rousing performances of Debussy, Stravinsky, Gruenberg, Ives, Britten, Prokofiev, and Shostakovich. The sold-out house in St. Mark's Episcopal Church was hot not only in the wake of an unusual 90-degree day in Palo Alto, but also from the heat of creative juices flowing freely all evening long.
A couple of hours before he joined five fellow luminaries for an ovation-inspiring performance of the Prokofiev Overture on Hebrew Themes, David Finckel quietly scurried about behind the audience at the preview concert, taking pictures of the performers. With a big smile on his face, he focused on fellow cellist Will Chow on stage, and he worked the shutter con vivace. 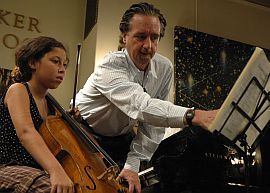 Chow, 14, is a student in the San Francisco Conservatory Preparatory Division. Finckel, who has a teenage daughter of his own, beamed with parental pride. Between clicks, he spoke with quiet conviction: "I would be happy just working with them."

"They" are the festival's Young Performers Program Artists, ages 8 to 18, and the older International Program participants. Over a couple of decades in Aspen, La Jolla, and elsewhere, I have watched Finckel and Wu Han, [email protected] artistic directors, invest themselves passionately in training and nurturing young musicians. This festival is a glowing tribute to their dedication, a showcase of stunning results. 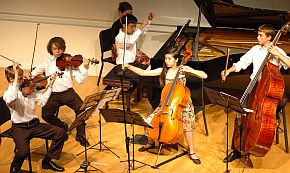 Saturday's free prelude — called a Koret Young Performers Concert — featured the younger group in music by Haydn, Mendelssohn, and Borodin. First in performance among equals in talent were violinists Stephen Waarts, 11 (a veteran of Wieniawski and Paganini concertos), and Alexi Kenney, 14 (S.F. Symphony Youth Orchestra assistant concertmaster), and the above-mentioned Master Will, a multiple competition winner.

A highlight of the prelude concert was the richly melodious finale of Borodin's rarely performed 1862 Piano Quintet in C Minor, with pianist Nicolas van Poucke, violinists Gerard Spronk and Ashvin Swaminathan, violist Sasha Friedenberg, and Chow — a couple of preteens, two "midteens." (With pretty much everything in the world going to hell in a handbasket these days, I wonder about the meaning of the emergence of vastly more prodigies in music and other disciplines than ever before.)

The opening of the evening "Modernism" concert could not have been more appropriate and felicitous. Not in the standard repertory, though that's where it belongs, Debussy's 1917 Violin Sonata is a masterpiece with a seamless fusion of Classical, Romantic, and modern idioms. Breathing with his violin, Ian Swensen played off-book, with precision and passion, partnered superbly by Anna Polonsky, a pianist with appealingly simple and clean accompaniment. I hope the prelude-concert kids were watching, as these two are selfless, dedicated artists, in service of the music and nothing but the music. 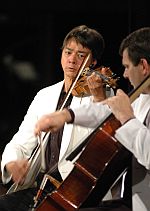 The Escher Quartet — Adam Barnett-Hart, Wu Jie, Pierre Lapointe, and Andrew Janss — served up the pleasing miniatures of Stravinsky's 1914 Three Pieces for String Quartet and Louis Gruenberg's 1930 Four Diversions for String Quartet. Against the program-opening Debussy and what was yet to come, this part of the concert was something of a resting place: good, but not great.

The Stravinsky pieces last only a few minutes each, and are rather forgettable — an atypical experience with the composer. Perhaps it's a strictly personal response, but Gruenberg has never done much for me, not even with his best-known work, The Emperor Jones. Born in Russia, in 1884, and dying in Beverly Hills, in 1964, Gruenberg started his career as a pianist with the Berlin Philharmonic, and spent the last decades of his life in Hollywood, writing film scores. Diversions has elements of blues and jazz, but lacks the freedom of the genre. The work sounds like a film score, yet I failed to visualize the movie that it might have been meant to accompany.

I had no such ambiguous feelings about a set of Charles Ives songs, with baritone Robert Gardner seemingly accompanying Polonsky, whose supposed piano support for the singer took center stage, especially in the outrageously buoyant Circus Band. 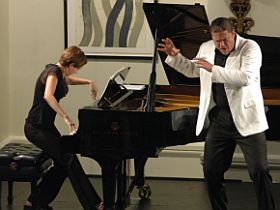 This was not the self-effacing, restrained Polonsky of the opening Debussy piece, but a whole other persona of playful, fun-loving musician, who at the end physically took flight. If the description indicates a case of upstaging, rest easy: Such was not the case, as singer and pianist reveled in the music together.

Gardner has a smallish but beautiful high baritone, and musically he handled the greatly varied pieces of the program equally well. One by one, the turn-of-the-century pieces In the Alley, Charlie Rutlage, Down East, and the prayer of Serenity ("Take from our souls the strain and stress/and let our ordered lives confess/the beauty of Thy peace") received individualistic performances, but somehow the set also created a unified sense of Ives' gift to the listener.

Britten's 1932 Phantasy, Op. 2, is a miniconcerto for oboe, and William Bennett's performance of the meandering but tightly coiled music had everything we might expect from that San Francisco Symphony principal. Swensen, violist Paul Neubauer, and cellist Andrés Diaz formed a dedicated ensemble around Bennett.

Of the dozen or so live performances I've heard of Prokofiev's 1919 Overture on Hebrew Themes, Op. 34, none approached the white heat of its execution in St. Mark's. Normally, the clarinet leads the way, and in Anthony McGill, the ensemble certainly had a star for the role, but so intense and abandoned were all performances that the clarinet blended in perfectly with two violins, a viola, a cello, and yet another Polonsky persona at the piano. 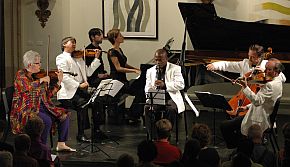 The concert-closing Shostakovich, his Two Pieces for String Octet, Op. 11, from 1925, is a heavier, bigger piece than the Prokofiev, but such was the impact of the latter that the brilliant members of the two quartets — the Escher, plus Fleezanis, Swensen, Neubauer, and Diaz — needed some time to retune our ears to the present and thus let us come away from the resonance of a unique happening.

This came to pass, of course: The power of the music and the caliber of the performers, especially in the breathtaking Scherzo, with its indescribable grand-orchestra power, pretty much put to rest everything that had preceded it. Almost, but not quite. Feeling a bit guilty, after the concert I wound up being propelled down the street by the irresistible rhythms of the Prokofiev pulsing in my mind.