Three cheers for Michael Morgan. What he and his Oakland East Bay Symphony may lack in subtlety, refinement, and nuance, they more than balance with passion and commitment. How gratifying it was to hear him announce, during a postintermission fund-raising spiel, that a full 25 percent of his orchestra's budget is devoted to educational outreach. 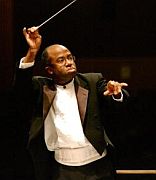 In remarks prefacing the Persian New Year celebration portion of OEBS' "Notes From Persia" concert, Morgan also proclaimed, "Thus we come together person-to-person, rather than letting our own two governments tell us what to think of each other." As everyone around me, including one Oakland city councilperson, heartily applauded, it was easy to understand why so many seats in the Paramount Theatre were filled.

The first half of the two and a half hour evening — the length due in part to the interminable line at the women's room — was anything but Middle Eastern. When I saw the program listing for Richard Strauss' Don Juan, Op. 20, all I could think of was that OEBS could not possibly equal the recent Davies Symphony Hall performance by the Royal Concertgebouw Orchestra under Mariss Jansons. There, in addition to the expected vigor of the opening theme, we experienced an astoundingly poetic presentation of Don Juan's attempts at seduction — both his tender advances and subsequent sadness and depression at his failure — and a revelatory rendering of the final duel and welcoming of death.

Morgan's version had plenty of energy, but too much straight-tempo conducting robbed thematic transitions of their emotional impact. Nor could the impressive whipping it up at the end compensate for middle themes that lacked interest, to say nothing of an orchestra and a hall that are unsuited for Strauss' requisite Technicolor display.

Pianist Tara Kamangar, a Peninsula native who recently completed her postgraduate studies in piano performance at the Royal Academy of Music, greatly impressed in Rachmaninov's Rhapsody on a Theme of Paganini, Op. 43. Although she could have voiced her grand romantic statements with more force, her fingers moved like liquid gold. Softer passages were especially lovely and poetic, with Morgan fostering a fetching interplay between piano and the orchestra. Kudos to Concertmaster Dawn Harms for her extremely romantic solo.
Entrancing, Enticing Mezzo
Heading south after intermission, we arrived in Iran by way of the Bay Area. Tehran-born mezzo-soprano Raeeka Shehabi-Yaghmai, who received a postgraduate artist's diploma from the San Francisco Conservatory of Music, took the stage to perform her collaboration with Conservatory composer and teacher David Garner. Titled Melodies From My Homeland: Iran, the work is one of the fruits of Shehabi-Yaghmai's Persian Melody Project. It consists of new, distinctly Western arrangements by Garner of six Persian folk songs and well-known melodies.

I was totally entranced by the singing. Visually enticing as well, the stage-wise Shehabi-Yaghmai possesses a fine instrument, strongest on top and seemingly tailor-made for these songs of love, seduction, and homeland. Sacrificing the temptation to employ the Western, operatic production that distinguishes the Bizet and Mozart clips on her Web site, she launched into rapid scaled passages with straight tone and the somewhat more pinched sound characteristic of Iranian vocalism.

In the opening song, Goleh Pamchal (Primrose flower), her unaccompanied singing was totally assured. The wail in her voice on Sarzamineh Man (My homeland) was as convincing and moving as her sexual insinuations in Seh Godar (Three mountain passes). She could also teach Angela Gheorghiu a thing or two about how to lift your arms, move your hips and neck, and play the part to perfection without acting like a prima donna in heat. Although her Bay Area appearances have been mostly limited to smaller, regional companies, my sense is that her Persian Melody Project offers this born showwoman much hope for recognition among music lovers who can see past the recent political fear-mongering about Iran.

As for the music, my companion, a former member of the music department at what is now Cal State East Bay, complained that the chords were too commonplace and the folk melodies repetitive. I was far more favorably impressed, especially with the beautiful orchestral statement in Sarzamineh Man and the sheer loveliness of Garner's arrangement of Shekare Ahoo (Deer hunt). (The deer in this case is also "dear," as in, dear, I am hunting you "from valley to valley ... like a deer stranded from its herd"). I hope to hear this music again in a venue that does not kill orchestral color the way the Paramount does.
Deadly Movie-Music
Returning to the stage, Kamangar played equally well in the Piano Concerto No. 2, Op. 45, by Uzbekistan native Aminollah (André) Hossein (1905-1983). I found the music insufferable. The opening sounded like a herald in a Grade B battle film, dominated by a monotonous, three-times-is-more-than-enough fanfare whose incessant, militant "bram bram, bram brams" made a great case for pacifism. Yes, there were some evocative passages in the depressive middle movement, which Kamangar performed with admirable grace. But the final Scherzando, with "boom boom booms" evoking images of hussars or Cossacks riding over mountain passes with swords strapped across their chests, left me feeling that John Wayne could have said far more just by whistlin' Dixie.

Thankfully, Morgan programmed a final work, the most engaging, lengthy suite from the opera Rostam and Sohrab, Op. 8b, by Iranian-born Loris Tjeknavorian (b. 1937). Employing some of the same ethnic percussion played with excellence by David Spangler in a few of the Persian song arrangements, the work was a series of separate orchestral tableaux. Several elicited justifiable applause from the not-intimidated-into-silence portion of the audience.

The music, which employs Persian modes, was variously dark, dramatic, and violent; exotic and atmospheric; plaintive and folklike; and extremely visceral. It tells a story with cinematic flare without resorting to Hossein's Grade B effects. I was impressed with the wonderful cross-rhythms and exotic syncopation of one applause-getting section, the lovely rising and falling strings that illumined a plaintive melody, the sounds of death that permeated the warlike section, and the razor-sharp jags of the finale.

Pianist Ellen Wasserman could barely be heard through most of it, but the fault lay in the acoustic and scoring. With Tjeknavorian present to take a well-deserved bow, I left praying that the consequences of spending even more than the $12 billion per month currently squandered on the Iraq debacle would dissuade the crazies running our country from destroying yet another culture that has produced such beautiful music.