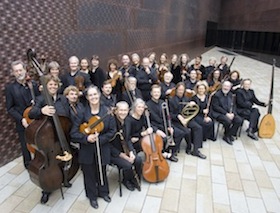 Philharmonia Baroque, on Sunday at the First Congregational Church of Berkeley, gave the world a wonderful gift — a magnificent performance of Bach’s monumental Mass in B Minor. The Philharmonia Chorale was the star from beginning to end, starting with the splendid polyphonic opening Kyrie (Lord have mercy) and closing with a moving Dona nobis pacem (Give us peace).

The Chorale’s impressive tenor section was glorious in the Gloria, and led off many of the movements with clarion sound. The altos also were good at getting movements off to a grand start. The sopranos divided into two parts in several movements, and always produced plenty of gorgeous sound no matter how few or how many were singing a given part. And how many choruses include six basses who can judge the quick and the dead at breakneck speed?

The dramatic force central to the Credo was wonderfully realized, from the mysterious quality of Incarnation through the wrenching, chromatic Crucifixion, the hushed burial of Jesus, and the electrifying Resurrection. All were superbly conducted by Nicholas McGegan and superbly sung by the Chorale.

Countertenor Clifton Massey gave a stellar performance. His “Qui sedes” ... was a delight.

Filling in for the ailing Daniel Taylor, countertenor Clifton Massey gave a stellar performance. His “Qui sedes” (Who sitteth at the right hand), beautifully accompanied by Gonzalo Ruiz on oboe d’amore, was a delight. His Agnus Dei (Lamb of God) was an expressive marvel — his impeccable phrasing and intonation supported by endless supplies of breath, with powerful support from the orchestra’s continuo players.

Massey, a member of the sterling Bay Area ensemble Clerestory, is also an excellent ensemble singer, as is soprano Sherezade Panthaki, and their duets were a pleasure to hear, especially the Christe, as they passed words and phrases back and forth in continuous dialog. The same could be said of tenor Thomas Cooley, who sang “Domine Deus” (Lord God) with Panthaki (accompanied by Stephen Schultz’s flute obbligato) with close attention to the text, making a nice introduction to the chorus entry on the reflective “Qui tollis peccata mundi” (Who takest away the sins of the world).

A slightly slower tempo might have made the play between soprano and violin more pleasing rather than merely impressive.

Panthaki’s only solo was the Laudamus Te (We praise thee), sung with an obbligato provided by Concertmaster Elizabeth Blumenstock, playing as fast as only she could play (and survive). To my taste, a slightly slower tempo might have made the play between soprano and violin more pleasing rather than merely impressive. Baritone Nathaniel Watson brought warm, focused sound to his solo in the Credo, “Et in Spiritum Sanctum” (And in the Holy Ghost), supported by two oboes d’amore, played by Ruiz and Michael DuPree.

The Chorale changed its figuration for the Sanctus — which divides both the soprano and the alto sections — and the Osanna, written for double choir. The soaring Sanctus, sung at just the right tempo, ended with “Pleni sunt coeli” (Heaven and earth are full of his glory), filling the church with glory. At the close of “Dona nobis pacem” the large audience rose in a standing ovation, richly deserved.