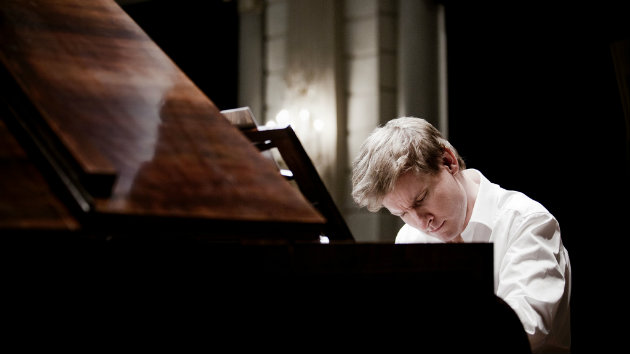 Like an engine revving up, gearing down, purring along contentedly, and occasionally backfiring, Philharmonia Baroque ran an adventurous course on Friday, Feb. 5, at San Francisco’s Herbst Theatre, in its second of four all-Mozart programs around the Bay. Nicholas McGegan conducted, with fortepianist Kristian Bezuidenhout as soloist in the Concerto No. 23, K 488.

The evening got off to a delightful start, sun and shade dappling the first two movements of the Symphony No. 27. The opening Allegro was all spry and limber phrasing, with touches of light-fingered wit throughout. An accent got a slightly thumpy emphasis here and there. A dynamic shift drew winking attention to itself. The horn shouldered his way forward in a repeat section.

If anything, the ride got even better in the second movement, which lived up to its marking of Andantino grazioso. McGegan and his band were alert to every graceful nuance, turning from tender innocence to surprising gravity and then back out of the shadows again. The cello pizzicati were perfectly judged. It all ended with a quizzical, wondering shrug. Energetically played as it was, the concluding Presto is one of those rare Mozart movements that seems machine-made, a lot of busy wheel-spinning that never gains much traction.

It was the composer, not PBO, who let down his guard in the final movement. Energetically played as it was, the concluding Presto is one of those rare Mozart movements that seems machine-made, a lot of busy wheel-spinning that never gains much traction.

The A-Major Concerto K. 488 is one of the glories of Mozart’s works for keyboard and orchestra, inventive, eventful, ebullient, and assured from beginning to end. The conversation between the soloist and the orchestra seems both natural and dramatic, its unfolding both arresting and inevitable.

Unfortunately, especially in the early going but also in stretches throughout, the exchange was muted by balance problems. The fortepiano’s sweetly muted timbres fought some losing early battles with overly incisive playing from the woodwinds and violins. Bezuidenhout, performing with a score, was simply inaudible.

Things improved through the course of the piece, although the problem never fully disappeared. That was a pity, since the soloist displayed such fine-grained and ingratiating technique. His runs were purely executed, the trills even, and his lyrical instincts, in the yearning Adagio, rhythmically expansive. His phrasing was warm and supple. This listener almost forgot he was working without a modern instrument’s sustaining pedal.

And yet the balance issue persisted. Perhaps in moving from hall to hall, PBO has to solve this equation anew at each performance.

The second half of the program was devoted to the Symphony No. 39, the first of Mozart’s three towering last symphonies. If not the equal of the other two, this E-flat Major work brims over with stylistic and emotional variety, from its brawny first movement to the woodwind showpiece of the second, a taut Menuetto, and whirling, final Allegro.

The piece made an arresting, if somewhat clumsy entrance, with the timpani hammering out its dotted rhythms and the ensemble reeling a little to find its way. McGegan had his foot on the pedal right from the start, and kept it close to the floorboard throughout.

The results ranged from patches of exhilaration – in a bracing climax to the opening Adagio-Allegro and a cleanly voiced Andante – to an overall sense of exhaustion. The symphony felt pushed, stretched to the limits, as if the conductor were determined to wring a bigger, more emphatic impact from his relatively compact ensemble. The string sound too often verged on shrillness. The Menuetto was heavy-footed, with the choice clarinet passages played without much charm. Things rallied near the end, as the final Allegro took on an edgy momentum.

The concert’s inconsistencies and liabilities did deliver a tonic if unintended message about Mozart. Even three familiar works are enough to remind a listener that he contains multitudes, hard to take in and encompass in any single set of performances.  It’s why orchestras will never stop trying.