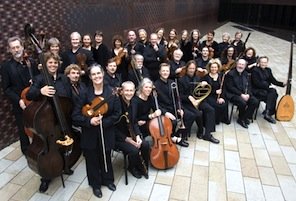 Philharmonia Baroque Orchestra inaugurated its 31st season with works of the Classical period. I heard them on Saturday night in Berkeley’s First Congregational Church. Throughout the performance, I was struck by the group’s successful injection of unfamiliar elements into music so omnipresent that it sometimes seems inescapably familiar.

The dichotomy was achieved partly by brilliant programming. In the first half, one of Mozart’s most popular symphonies, the “Prague,” was followed by a horn concerto that doesn’t really exist. That is, the concerto was a pasticcio, put together from fragments of what began as three separate concertos. The second half of the concert began with an overture by Franz Ignaz Beck — hardly a household name — and concluded with one of Haydn’s 12 celebrated “London” symphonies.

The most newsworthy portion of this program was surely the “nonexistent” concerto, which featured regular orchestra member R.J. Kelley as soloist. The opening movement of this patchwork was recently reconstructed by Mozart specialist Robert Levin (K. 370b). The other two movements survive in complete condition. One was only a fragment until a fortuitous discovery as recently as 1988 (K. 495), while the other was drawn from one of Mozart’s well-known horn concertos (K. 371).

To watch a natural horn player perform a late-18th-century concerto is surely almost as terrifying for the audience as it is for the soloist. Because the technical demands of this music are basically impossible on the instrument for which it was written, the question is not whether the performer will fall down, but how he will recover when he does. Kelley managed the inevitable pitfalls with a grace and good humor that had the crowd smiling and rooting for him. And he treated us to a remarkably creative cadenza in the third movement, filled with striking sonorities that only a natural horn can produce. He also used some sounds that I wasn’t aware were possible from that instrument, including harmonic intervals at cadential points (the horn’s version of double stops). The performance was the perfect blend of grace, virtuosity, and humor — just what a concerto from the 18th century is supposed to be.

Another eyebrow-raising selection was Beck’s overture from his ballet La Mort d’Orphée. This work was saved from the obscurity that befell most of his other music by its popularity among Parisian audiences as an overture to Gluck’s renowned opera on this story. Unlike Gluck’s work, Beck’s did not feature a bowdlerization of the original myth’s conclusion, but took the most gruesome point of that tale, the murder of Orpheus by enraged Dionysian women, as its central theme.

This connectedness of the concert’s selections showed a deep knowledge of the repertoire and sensitivity to programming.

Beck used the two sides of this conflict to generate programmatic elements for his overture. The oboes, exquisitely played on Saturday night by Gonzalo Ruiz and Michael DuPree, gave voice to Orpheus, mourning the ultimate loss of Eurydice after failing Hades’ test. During these lamentation sections, the strings played gentle pizzicatos, surely representing the lyre of Orpheus. This spare accompaniment made the contrasting second theme, with its sudden explosion of sound from the strings, quite effective. This subject’s rapid scales and surprising turns of phrase presumably symbolized Orpheus’ wild and frenzied assassins.

Not only did Music Director Nicolas McGegan’s programming for this concert manage to blend the familiar and unfamiliar in a successful mélange, but it also tied everything together into a neat package through other means. The large and more familiar works on the program were symphonies by Mozart and Haydn. The first work was perhaps Mozart’s most Haydnesque, the “Prague” symphony. The last was Haydn’s Symphony No. 98, composed in 1792, with slow passages so deeply moving that historians have sometimes fantasized that the work may have been a threnody for the recently deceased Mozart. This connectedness of the concert’s selections showed a deep knowledge of the repertoire and sensitivity to programming.

The Haydnesque qualities of Mozart’s “Prague” Symphony also made it a suitable choice for a “Baroque” orchestra. Mozart opens this symphony with a slow introduction, so characteristic of Papa Haydn’s procedures, and also shows off his contrapuntal chops with particular pizzazz. In the first and second movements of this work, Mozart couples strict canons and invertible counterpoint with such an accessible musical language that it’s easy to overlook the careful architectural planning that went into the work’s construction. These structural gambits were rendered crystal clear by the crisp sound of PBO’s instruments and their expert players.

Such old symphonic favorites often suffer from lackluster, workaday renditions, but Philharmonia Baroque approached it with such inventiveness that it was as fresh and exciting as it must have sounded to Mozart-hungry Prague in 1781. McGegan and the ensemble held nothing back, letting the sound absolutely wail in the work’s most impassioned moments. This was not “Mozart for your newborn.” The last movement was particularly exciting, with a feverish pacing. It was occasionally marred by a tendency to lean too far forward in the tempo, teetering close to the edge, but with overall enthralling effects.

If the second movement of Haydn’s Symphony No. 98 is sometimes described as “Mozartean,” the outer movements are pure Haydn. Of particular note was the use of a copy of a 1780s fortepiano, brought in simply for McGegan to strum a few chords and to toss off the little nominal “cadenza” that Haydn included in the last movement. The presence of this obbligato part, which Haydn himself originally performed while conducting from the keyboard, makes the Symphony No. 98 one of the less-often performed of the “London Symphonies.”

No one could write a Rondo finale more effectively than Haydn, and this one, written during one of the happiest moments in the composer’s career, neatly encapsulates the intellectual vigor and eternally youthful exuberance of Papa Haydn. This brilliantly inventive and ever-surprising movement brought smiles to the musicians’ faces as they played, and those of us in the audience were fortunate to share in their pleasure.