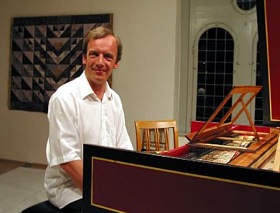 Mortensen's genius doesn’t always translate to musical gestures that suit my tastes. In the past I've admired the clarity of his intentions and the demonstrativeness of his execution, while being disturbed by his idiosyncratic interpretations. But Sunday night, in Berkeley’s First Congregational Church, the effect was different. I’m not certain whether it was my mood, or the presence of two dozen collaborative musicians to reign in some of Mortensen’s more extreme tendencies, but the effect was dazzling.

It was an all-Bach evening, with two harpsichord concertos as centerpieces. The first concerto, in D minor, BWV 1052, is sometimes maligned because it isn’t a “real” harpsichord concerto. The presumption is that it was transcribed from a violin concerto, and maybe not one by Bach. And critics also don’t like the somewhat rigid formal structure.

But these arguments have always seemed a bit silly. Formal ingenuity isn’t always Bach’s thing, after all. This is a piece about virtuoso fireworks and unbelievably dramatic thematic gestures. All it needs is a bit of interpretive courage. This particular flavor of Bach is right up Mortensen’s alley. Sitting on stage in his white bow tie and tuxedo, he looked like a man from another century: the 19th. His motions, as he played and conducted from the keyboard, were grandiose and dramatic. Several audience members around me snickered at some of them, and I suppose I understand why. But Mortensen’s musical effects were wonderful, and if those types of idiosyncrasies in body movement translate into such scintillating musical effects, then I welcome them. If you’ve ever seen Josef Danhauser’s famous painting called Liszt at the Piano, then you have some idea of what it was like to watch Mortensen perform. 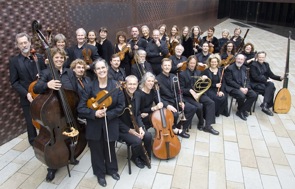 Mortensen is a master of timing. On Sunday, he never pushed rhythms beyond the bounds of coherence, but he certainly took some liberties. Any time the band dropped out, Mortensen relished the freedom. He stretched the tempo here, and pushed towards moments of excitement there. And he took advantage of the wonderful, extended bass range of the evening’s harpsichord (a copy of a German Graebner harpsicord, newly built by John Phillips) by adding in some occasional doubled octaves in the bass.

It was also fascinating to watch Philharmonia Baroque play with him. Everything was obviously carefully planned, but had the feel of being spontaneously conceived. No two phrases were ever articulated in quite the same way. Tempos provided another source for expressive possibilities, too. They were remarkably flexible in the opening set, the Orchestral Suite in C Major, BWV 1066; particularly wonderful was the way that the orchestra “pushed” the tempo toward high points of phrases, and how it subtly sped up when dynamics increased. That latter practice might be taboo in contemporary musical training, but it’s just the sort of advice that Bach’s son gave in his famous treatise on making music. Why fight instincts, when the results can be so exciting?

The orchestra’s timing was wonderful, too, especially between movements. The whole of the Orchestral Suite was joined together as a single unified conception. And the audience sat in rapt silence at the end of the second movement of the evening’s second concerto, BWV 1054 in D Major. Before we knew what hit us, the group plunged into the scalar opening of the third movement. No tuning, no awkward shuffling of pages: just a carefully timed dramatic contrast. These types of moments are far too rare in the concerts that I hear.

As if two concertos and an orchestral suite weren’t enough of a rich musical palette, Mortensen also brought Swedish soprano Maria Keohane with him to sing Bach’s “Wedding Cantata,” BWV 202. Keohane’s voice is like a mixture of Kiri Te Kanawa and Julianne Baird. Such comparisons of singers are, by nature, unfair, but it’s the best I can do to describe the unique blend of chestiness and floating shimmer that this soprano creates. Throughout, both guest performers made this cantata about as playful as can be done with Bach. The presentation was a humorous intermezzo among a program that featured some more heavily dramatic music.

It was not surprising that pairing one of America’s great period orchestras with a harpsichordist of such dramatic flair produced impressive results. The liberties taken might not have suited everyone’s tastes, but I enjoyed the roller coaster ride. And I was in good company: At the end of each concerto, the orchestral musicians burst into fervent applause for Mortensen, along with the audience. That heartwarming sight was a rare — and telling — one.