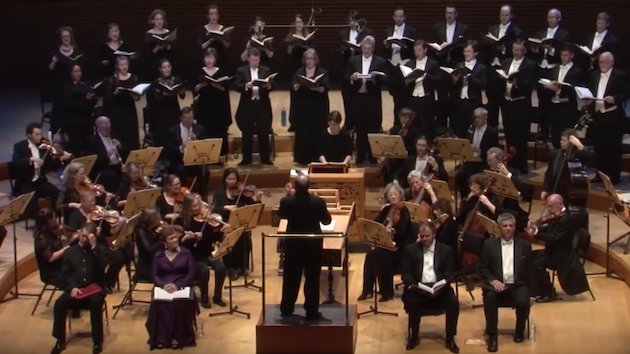 A concert that began unpromisingly, with half an hour of Beethoven busywork, ended in a sustained exultation Friday night at the Herbst Theatre, with Philharmonia Baroque’s rapturous performance of the Mendelssohn Op. 52 symphony-cum-cantata, Hymn of Praise. From the first, swaggering entrance of the trombones to the final, gleaming, and richly woven chorus, Music Director Nicholas McGegan led the combined forces of his responsive band, an augmented Philharmonia Chorale, and three soloists on a musical and dramatic spirit quest. Everyone played and sang with utter conviction to the cause. 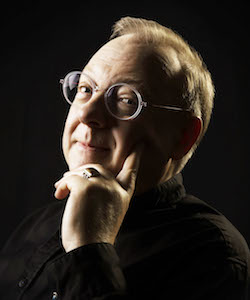 Classified as the composer’s Symphony No. 2 (though it was actually the last of the five he undertook), the piece is a curious hybrid. It opens with a long and discursive sinfonia, followed by a series of choruses, chorales, solos, and ensembles set primarily to Psalm texts. Much of it is through-composed, lending to a Hymn that might otherwise have felt episodic a propulsive unity.  While its structure earned Mendelssohn some inevitably unflattering comparisons to Beethoven’s Ninth Symphony, this work requires no apologies. By turns infectiously melodic, harmonically layered, somberly mysterious, and ecstatic, it’s a work of great invention and deeply wrought intensity.

The Philharmonia, which had sounded patchy and erratic in a Beethoven Leonore Overture No. 3 and perfunctory in a pair of the composer’s short and largely uninteresting choral works to open the evening, performed as if re-awakened and renewed after intermission. Mendelssohn’s multi-movement sinfonia shone right away and throughout with precision and bright colors.

With the horns in expansive high spirits and the woodwinds keening sweetly, the strings sang in long phrases and taut exclamations. A triple-meter passage had a liquid, waltz-like grace. That gave way, with a gradual but inevitable racheting upward, to a galloping entry for the first choral exclamation: “All ye, all things, all that has life and breath, sing to the Lord.”

And so the chorus did, in dramatic and gripping fashion. Soprano Dominque Labelle joined the excitement part way through, her voice rising in lustrous and urgent descant. Before she’d ever uttered a note, this fine Philharmonia stalwart had already made her involvement clear, following along in the score, head and body swaying, in the opening orchestral movements. 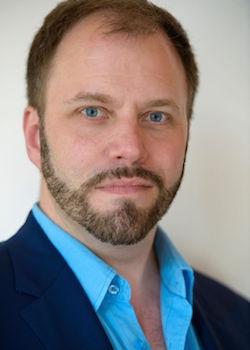 Tenor Thomas Cooley brought the first shadings of darkness and potential consolation to the stage. Singing over the murmurous strings, he shaded lines about “distresses” and “deep afflictions” with an amber mournfulness. When it came time for the bereaved to be offered comfort, his supple rubato opened up the possibility of redemption and release.

Filled with subtle and telling details, this Hymn never faltered. The strings sent bright shafts of light through some choral passages and framed others in aspiring arpeggios. Labelle adjusted her commanding tone to merge with the lighter timbre of Ashley Valentine in a tender and transporting soprano duet.

Mendelssohn’s close attention to the text received full value. When Cooley warned of “trouble and deep heaviness,” the orchestra signaled its sympathetic alarm. Several lines later, an unnerving seventh on the word “watchman” gave that interval an unmistakable and eerie tension.  Moments later, singing her sweet response from the balcony, Valentine vowed that the light would come. It was impossible not to trust and believe it.

Cooley made that manifest, in his final solo, bringing a fresh warmth and sense of delivery to the “blessings” in the text. Singing in lines that occasionally joined up in parallel phrases and at other times furled around each other, he and Labelle set up the final chorus with their gorgeous duet.

This gratifying union of piece and performance made the indifferent first portion of the program all the more puzzling. Odd as it seemed, the Beethoven served as a sort of tune-up for the Mendelssohn. It’s not often that a musical scoreboard favors the latter over the former. But this account of the third Leonore Overture had little to recommend it, with sloppy entrances, charmless dynamics and an overall sense of frantic disarray. The “Elegiac Song,” Op. 118 that followed emerged with a plusher and more transparent string sound, but the brief text about grief and consolation seemed oddly understated by the chorus. Calm Sea and Prosperous Voyage, to a text by Goethe, came off as a simplistic exercise in musical illustration of the ocean’s contrasting modes of stillness and motion.

It’s doubtful that many listeners were still out there at sea by the time the thunderous, false climax arrived near the end of the Mendelssohn Hymn of Praise. There, thrillingly, were those unbridled trombones again, leading the charge into the final bars. The journey had come full circle, in one final chorus of thanks for “all that has life and breath.”