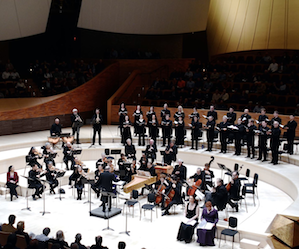 Without exaggeration, Juditha triumphans can be described as an entertaining and crowd-pleasing bit of musical extravaganza. It’s exactly because of these qualities that Vivaldi’s only surviving oratorio was the perfectly lavish finale of Philharmonia Baroque’s 2013–2014 concert season, with performances in Stanford, San Francisco, and Berkeley.

Juditha triumphans devicta Holofernis barbarie (Judith triumphant over the barbarians of Holofernes), RV 644, as the oratorio is officially named, does not only call for five soloists and a large chorus, but also requires a large orchestra that includes all kinds of relatively unusual instruments, such as viola d’amore, bassoon, and mandolin; Baroque oboes, recorders, chalumeaux (an early form of the clarinet), and theorbos; not to mention a consort of viols, trumpets, and timpani.

Vivaldi uses the different tonal aspects and colors of this multitude of musical instruments to symbolize the exoticism of certain characters in the story and denote their various moods.

To an 18th-century Venetian audience, these sonic hints and tonal subtleties must have been much more obvious and self-explanatory than to our modern ears. Fortunately, we have the detailed program notes, by Eleanor Selfridge-Field, and a SFCV interview with Philharmonia Baroque’s musical director, Nicholas McGegan, to help direct our attention.

Juditha triumphans is based on a story from the Apocrapha about a beautiful Jewish widow, Judith, who seduces and consequently beheads the Assyrian General Holofernes, thus saving her people from impending doom.

Since Vivaldi composed the oratorio to commemorate the successful defense of the Adriatic island of Corfu against the threat of the Ottoman Empire in the summer of 1716, Judith came to represent the Republic of Venice, and Holofernes and his barbarians, of course, the non-Christian enemy.

For his protagonists — all female voices — Vivaldi created five vastly different musical personalities, and Philharmonia Baroque has done a wonderful job in voice-/type-casting the soloists. Diana Moore was a superbly arrogant Holofernes in both voice and demeanor, but also proved herself capable of showing the General’s softer side as his infatuation with Judith grows — and of convincingly getting drunk and falling asleep on stage.

The Philharmonia Chorale, prepared by Director Bruce Lamott, did its usual marvelous job, in this case as Assyrian Soldiers, Servants, Drunken Soldiers, or Judeans.

Dutch mezzo Cécile van de Sant made for a versatile and seductive Juditha, with her beautiful lower register; her handmaiden, Abra, was playfully portrayed by soprano Dominique Labelle, with a bright and delightful tone; and mezzo Virginia Warnken was an exuberant Ozias, high priest of Bethulia.

The Philharmonia Chorale, prepared by Director Bruce Lamott, did its usual marvelous job, in this case as Assyrian Soldiers, Servants, Drunken Soldiers, or Judeans. During the performance at SFJAZZ that I attended, the Chorale didn’t blend as well with the orchestra as it should, mostly due to its position above rather than behind the instrumentalists.

At the center of the vocal whirlwinds generated by Juditha triumphans stood the unsurpassed Philharmonia Baroque Orchestra and its peerless director, Nicholas McGegan. One can only be impressed and grateful that this ensemble and this director are able and capable of delivering such a treat as this unusual Vivaldi oratorio.