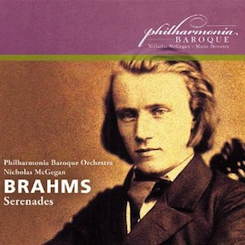 Period-instrument orchestras that venture into ever-later music eventually have to decide whether to stick to their original names, however inappropriate to what they’re now playing, or to switch to something more generic and less incongruous. John Eliot Gardiner’s English Baroque Soloists, for example, remained the EBS when playing Mozart and Haydn, but when they hit Beethoven and Berlioz, substantially the same body of players became the Orchestre Révolutionnaire et romantique.

Philharmonia Baroque Orchestra, by contrast, has kept its name over decades, while getting itself straight through Haydn, Mozart, Beethoven, Schubert, Schumann, and Mendelssohn. Here we are at the Brahms of 1859, and “Baroque” does begin to look a little silly by now. Fortunately it’s not what it looks like that counts.

The two orchestral Serenades on its latest disc are early, garrulous, sprawly, affectionate Brahms. I hadn’t really thought of PBO Music Director Nicholas McGegan as a natural Brahms conductor — music full of light wit is more his bailiwick, and this isn’t that — though he gets almost everything right here. There is love to spare, and a generosity about tempo that I don’t normally associate with him. Things that need to stretch are allowed to.

There’s a luxuriance, a sense of space, that when combined oddly with the PBO’s habitual detail-obsessiveness makes for uncommonly interesting Brahms. I get the sense that a lot of the players are letting their hair down, while nonetheless playing in that intense PBO environment (I’ve been in it myself, a few times) where you’re hyperaware of the players near you. It’s a situation ripe for feedback effects.

I would love to know, for example, how much of the portamento in the strings was designed-in, and how much just happened because someone tried something, and other players picked it up. Portamento means “sliding” from one note to the next when you’re shifting position on a stringed instrument. It’s something that modern string technique ordinarily tries to eradicate; unless you want a shift to be heard, it should be inaudible, and the occasions on which you ought to want it to be audible are few. That this wasn’t true in the late 19th century we know from any number of sources, ranging from string-playing treatises to turn-of-the-20th-century recordings.

So period-instrument players who venture as late as Brahms basically have to unlearn their taught antipathy for slurpy slides if they’re to play anything like an orchestra of Brahms’ time. It’s not easy. I remember playing a “period” Brahms Requiem some 20 years ago in which the concertmaster told us exactly where the slides were to go. It sounded as calculated and artificial as you’d expect.

The level of the individual wind contributions is wonderful. … The brass must surely have had the time of their lives here.

On this disc the PBO strings, by contrast, sound as though they’re at least partly living in the style, not playing by rote. There are a few places where I think a rational player wouldn’t have shifted, but everyone did anyway, for the purpose of doing a portamento. And there are also places where you’d expect a slide and don’t hear one. What’s happening there, at a guess, is that an executive decision was made to forbid a particularly risky shift. But what I hear, in the main, is a string section that sounds not self-conscious, not obnoxious, but simply comfortable sliding around.

Inevitably, when an orchestra has to expand its roster for a particular project on a tight schedule, not everything gels. There are, shall we say, woodwind intonation issues in both pieces, of the kind you’d expect of wind sections that don’t play together, as wholes, more than once or twice a year.

Still, the level of the individual wind contributions is wonderful. If I single out Lars Johannesson’s piccolo playing in the Second Serenade, it’s only because he had the highest notes. The brass must surely have had the time of their lives here. R.J. Kelley plays magnificently in the many horn solos, and while the four horns in both pieces don’t often play all at once, when they do it’s a thrilling sound. As for the viola section, augmented in the Second Serenade (which has no violins) by a number of players who ordinarily figure in PBO as violinists, someone seems to have taken to heart our old Cal viola-section motto of “Excellence Through Volume.” I’ve heard some anemic PBO viola playing, but not here.