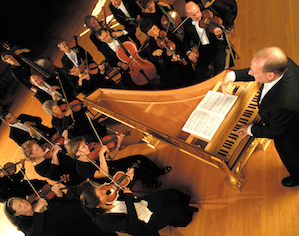 The Philharmonia Baroque Orchestra, conducted by its music director, Nicholas McGegan, gave its second concert in Stanford’s Bing Concert Hall on Wednesday. Bing is a new Peninsula series home for the orchestra (the program repeats at Herbst Theatre in San Francisco on Friday and at the First Congregational Church in Berkeley on Saturday and Sunday), a venue that suits the ensemble well. The sound is cleaner and the bright, open surroundings less forbiddingly gothic than those of the First United Methodist Church in Palo Alto, where I have heard this group before. McGegan's decision to play the entire program without harpsichord continuo accentuated the clarity of the sound.

The program notes and preconcert lecturer made a passing note, without emphasis, that this was largely a “Sturm und Drang” program. The point is worth accentuating. Sturm und Drang, usually translated as “storm and stress,” was a style, almost a fad, that passed through northern European instrumental music, particularly symphonies, in the late 1760s and early 1770s. Nervous tension, agitated pulsation, jagged rhythms, sudden emphases, startling pauses, monothematic drill, dark moods, unusual keys, and the minor mode — all sound unexpected from composers who at other points in their careers practiced the light, restrained, courtly style that typifies the earlier Classical period.

Franz Joseph Haydn was the foremost practitioner of Sturm und Drang. He wrote over a dozen symphonies typifying the style, of which No. 44 in E Minor, “Trauer,” heard at this concert, is one of the more outstanding. Haydn's dive into this weirdness has been attributed to his increasing mastery of his craft and his desire to experiment with the tame orchestra he had at his disposal. A few years later he abruptly abandoned the style. Scholars have guessed that perhaps Haydn's employer, Prince Esterházy, got tired of it and simply called a halt.

This, however, does not explain the other composers who wrote similar music at the same time. W.A. Mozart and Johann Christian Bach were among them. Mozart wrote two outstanding symphonies of Sturm und Drang, of which we heard his No. 29 in A Major, K. 201. (The other is the “Little” G Minor, No. 25, K. 183.) Although J.C. Bach left only one such symphony, that one is a killer. Philharmonia Baroque whipped through his Op. 6, No. 6, in G Minor, treating it delightfully as a vicious little monster.

Haydn’s dive into this weirdness has been attributed to his increasing mastery of his craft and his desire to experiment with the tame orchestra he had at his disposal.

Slashing attacks, quick cries from the violins, biting digs from the lower strings, and actual blats from the horns and oboes (a sound orchestras normally try to avoid) enlivened this tiny three-movement work. This performance must have been a real surprise to anyone casually acquainted with the composer’s polite chamber music and operas. The biggest kick came with the ending, which, after a movement’s worth of thundering, suddenly dies off quietly. McGegan turned away from the musicians with a mock shrug.

Rising to a Furious Pitch

The symphonies by Haydn and Mozart received a more expansive approach — so much so, in fact, that McGegan took all the repeats, including those of the second halves of sonata-allegro movements, which most conductors forego. Both of these performances built toward the full Sturm und Drang fury from a distant start. In each, the opening two or three movements were smooth and restrained, though crisply played, and made their pleasure through balance of sound. The winds were decidedly subdued and in the background, a challenge in music of this kind. The lower strings stood out, instead: the overlapping lines of Haydn’s canonic minuet, strong supporting chords in his slow movement, echoing whispers in Mozart’s opening movement, and counter-melodies in his slow movement being stronger than the main lines.

McGegan saved the impact of this one for a cute trick-ending, rivaling that of J.C. Bach’s finale.

Classical symphony finales tend to be particularly fast and energetic, and here the performances changed character, acquiring the compression and rigidity typical of Sturm und Drang. Haydn’s, in particular, bounced off the walls with the kind of energy the orchestra brought to J.C. Bach. In the Mozart, the change of style began earlier, in the minuet, driven by the honking little tag for horns and oboes that concludes every phrase. McGegan saved the impact of this one for a cute trick-ending, rivaling that of J.C. Bach’s finale for amusement value.

One other work completed the program, J.C. Bach’s Sinfonia Concertante for Oboe and Bassoon in F Major. While written during the same period as the symphony, it’s a more typical work of his, charming without being much of a whirling dervish. The soloists were from within the orchestra, Marc Schachman on oboe and Danny Bond on bassoon, and they played from their regular seats within the orchestra, as well. This was appropriate, as the work is unlike a concerto. It’s merely music for orchestra with more than a normal complement of oboe and bassoon solo passages. It was another enjoyable piece, energetically performed.