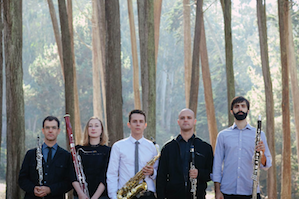 Anybody who has ever discovered the sound you can make when blowing air over a small blade of grass wedged between the lips knows the mischievously satisfying buzz of reed music. Whether it’s double reeds on the oboe (played by Kyle Bruckmann) and bassoon (Dana Jessen), or the single reeds on clarinet (Bill Kalinkos), saxophones (David Wegehaupt), and bass clarinet (Jeff Anderle), the Splinter Reeds quintet combines the piercing sound of reed instruments with an adventurous repertoire of new music. Its concert Saturday at Trinity Chapel in Berkeley was a diverse offering of current styles. Its sound, however, is very loud and penetrating — perhaps a bit much for such a small and boomy space.

The program opened with Ryan Brown’s Pinched (2014), premiered a few months ago by the Kronos Quartet and arranged for wind quintet for this occasion. Having heard both versions, I prefer the latter. The quintet spit out the traveling impulses with crisper bite than the string pizzicatos, and the big melody sounded thunderous in the bass clarinet and bassoon doubling.

Dai Fujikura’s Wind Skein (2013) received its North American premiere Saturday, as well. The first movement features poignant dissonances in a Toru Takemitsu–like haze, contrasted with a fluttering motif. Fujikura deliberately avoids triads, and pretty soon the dissonance morphs from unsettling to heartbreakingly beautiful. These chords fly by like slow clouds in the breeze, then segue into the second movement, which emerges sans pause with a long melody in the alto sax, which Wegehaupt dispatched with great expression.

In 3 Songs, 3 Interludes (2014), composer Erik deLuca calls for the singing of folkish tunes mixed with instrumental playing. As natural as singing is, it takes courage for some instrumentalists to use their singing voice in performance, because it’s not the instrument that they studied and mastered. Yet Splinter Reeds embraced the singing with enthusiasm and seemed comfortable with it. They sang about bees, the fall of Nolia, and a clever line repeating with an ambiguous ending: “I want you to know that I want you too / to know that I want. …” It was an island of pleasant calm in a concert that was otherwise quite intense. The most magical moment was when the texture blended from monophonic singing to one-by-one counterpoint with the instruments.

F.U.B.A.R. (2012), by Corey Dundee, was all over the place, as the name would imply. You can look up the definition of the military acronym yourself (rated R) — it described the piece perfectly.

By contrast, the written score for Northern Circles, by Peter V. Swendson, consists of intersecting circles on the page — no staff or note heads. Some avant garde composers have gone beyond standard music notation and instead use symbolic graphics as their composition. Here, the alto sax and and bassoon are supposed to improvise, based on these circles, and also to blend in context with an ambient electronic hum and some footage of desolate islands in Norway projected on a screen behind them.

The most magical moment was when the texture blended from monophonic singing to one-by-one counterpoint with the instruments.

Motet (1983), by Ron Ford, and arranged by Raaf Hekkema, was short and sweet with a Mediterranean-flavor oboe melody and a fun, light attitude. It created a fleeting diversion from the heavier fare on the program.

The members of the ensemble rearranged themselves to form a circle for David Lang’s Breathless (2003). Melodies were pixellated into small spurts and passed around the hall. The effect was mesmerizing but required a minimalist, zenlike mind-set to fully accept the extended length and little variety of the piece.

Line and Length (2007), by Matthew Shlomowitz, was even more over-the-top than F.U.B.A.R., with quirky directions in the score that prompted the players to put a lot of extra-energetic character into the crazed, ultrafast lines.

This ensemble consumes new music voraciously and is soliciting new works for wind quintet — so, composers, get to work!