There was a last-minute alteration to the program that the Tokyo String Quartet, under the auspices of San Francisco Performances, presented at Herbst Theatre on Thursday, and for the saddest of reasons: Violist Kazuhide Isomura, the single remaining founding member of the group, had been diagnosed with a detached retina earlier in the day. With surgery scheduled for the following morning, it was decided that a performance of Bartók's demanding Fifth String Quartet would create too much strain on his eye. As a result, one of Haydn's most witty and masterful late quartets, Op. 76, No. 1, in G major, was substituted and served to open the program. 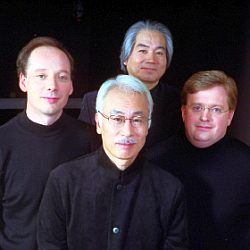 As listeners might expect from a quartet of the Tokyo's reputation, this last-minute change appeared to present little challenge, and there was nothing to suggest that Isomura's affliction was holding him back, though that observation by itself does little justice to the exceptionally fine performances the ensemble offered.

The beginning of the Haydn seemed a bit understated, and at first I wondered if the quartet had simply not adapted well to Herbst's rather dry acoustic, but my impression quickly changed. The experience was similar to the phenomenon of shapes in a dimly lit room gradually coming into resolution. It soon became clear to me that the Tokyo was actually playing with great refinement, and that what had initially seemed understated was, in fact, a wonderfully imaginative exploration of the quieter nuances of phrasing.

Most quartets go about adapting their interpretation to a less than ideally resonant hall by playing soft passages slightly louder and making shorter, crisper articulations slightly more legato, which has the unfortunate effect of limiting a performance's expressive range. The Tokyo steadfastly refused to make such compromises, maintaining instead the interpretive subtleties that have always been such a hallmark of its recordings. Its approach requires an extremely quiet audience, one capable of concentrated, attentive listening, and I felt fortunate indeed to find myself among such listeners on Thursday.

This was the first time I have had an opportunity to hear the Tokyo with its two newest members, first violinist Martin Beaver and cellist Clive Greensmith. While these fine performers have certainly brought individual new voices to the ensemble, which second violinist Kikui Ikeda fills out, they have also managed to maintain the distinctive group persona that the Tokyo has built over four decades. Beaver is a gifted violinist and an exceptionally fine leader, with just the kind of imagination and panache needed to bring out the wit in Haydn's quicksilver turns of phrase.

Many chamber ensembles have been lauded for the precise, refined ensemble work of their recordings, but the Tokyo is one of the few that has been able to live up to those standards in concert performances. Unfortunately, most quartets end up simply reproducing the same carefully worked-out interpretive schemes of their recordings. Such was my impression of the Tokyo the last time I heard it, many years ago. Not so last week. The members of the quartet dashed from one phrase to another with the aplomb of a gifted group of actors extemporizing an animated conversation.

Beaver, in particular, seemed always ready with a fresh idea, and his colleagues responded precisely and without hesitation to his apparently spontaneous twists and turns. Rarely have I heard Haydn's genial sense of humor brought to life so vividly. Beaver's playful rubato kept both the other performers and the audience on the edge of their seats, and he made use of a superb palette of articulations that ranged from skittering whispers to full-on, rollicking fiddling. Ornamental passages were tossed off with a wonderful improvisatory élan, especially in the Adagio sostenuto, and there were moments in the Menuetto (a scherzo in all but name) when I had to restrain myself from laughing out loud.
Transparent, Shimmering Textures
The Tokyo was equally impressive in Beethoven's quartet Op. 18, No. 2, "Compliments," which rounded out the first half. This early work shows the composer's debt to Haydn and shares much of his mentor's good-natured humor. In the louder passages of the first movement I thought the quartet occasionally pressed too hard, with an unimaginatively fast, wide vibrato, creating an unpleasantly strained sound.

Still, I was highly impressed with the range of colors the members explored, including some wonderfully transparent and shimmering soft textures with little or no vibrato, and with a well-focused sense of intonation. I particularly enjoyed the dramatic Adagio cantabile, though Greensmith's handling of the filigree work at moments near the end seemed heavy-handed, especially in contrast to Beaver's lighter, more rhythmically agile approach.

Clarinetist Sabine Meyer joined the ensemble for Brahms' Clarinet Quintet, Op. 115, which made up the second half of the program. I normally would expect a "modern-instrument" string quartet like the Tokyo to feel more at home with Brahms than with earlier classical repertoire, yet this was not the case on Thursday. Like the Tokyo, Meyer has a strong, confident, and refined musical personality. The quartet seemed to have difficulty adapting to her open, transparent sound, especially in the more forceful passages, and I sometimes had the feeling that the clarinetist and her colleagues were working in coordinated but oddly separate worlds.

This was largely a matter of the perennial problem of reconciling the primarily nonvibrato color of a clarinet with the tendency of most modern string quartets to rely on a continuous, intense vibrato as a kind of default texture. At times in the Brahms, while the contrast was quite effective, I often found myself wishing for a more carefully wrought compromise.

Nonetheless, as it had demonstrated earlier in the evening, the Tokyo Quartet is capable of creating wonderfully subtle and unusual colors and textures. In the softer passages, the string players and the clarinetist managed to find a blend that perfectly captured the elusive, magical, autumnal qualities of Brahms' valedictory chamber work.