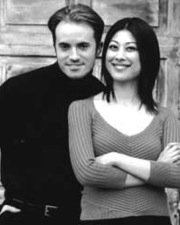 The world of music for two pianists is a rarified one. Established as an art form in the Mozart family for its two talented children, then popularized by Schubert at coffeehouses in Vienna, and finally made immortal by Brahms, the two-piano/four-hands repertoire has occupied an important but often neglected corner in the vast richness of piano music.

The Milton and Peggy Salkind International Piano Duo Festival celebrates that repertoire. Thursday’s opening gala, held at the San Francisco Conservatory of Music, showcased its great diversity. Each of the seven duo teams invited to appear has its own repertoire specialties and style.

This year the festival focused on music from the American continents. Pas de Duo (Naomi Sanchez and Stephen Varney, from Berkeley), regulars from the previous years, opened the evening with a lovely rendition of Grande Tarantelle Op. 67, by Louis Moreau Gottschalk. Their performance was a little more relaxed and freer than typical for its style, but was nevertheless a most polished, unified performance. The duo must have been quite familiar with the score, as they performed the work from memory, something out of the ordinary for piano duos. 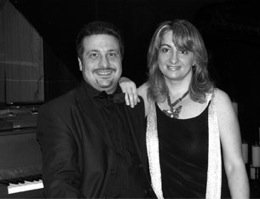 Marina and Fred Hammond Duo presented Le Grand Tango, by Ástor Piazzolla. They were at most times in unison, yet they frequently threatened to drift apart, perhaps to challenge or provoke each other. Both were keenly aware of their roles, and the combined result was a carefully choreographed dance, deliberative yet seductive. It was music to see as well as hear.

Returning to the festival for the third time were Sara Bartolucci and Rodolfo Alessandrini, who formed Duo Pianistico di Firenze in 1990, performing Rossini’s William Tell Overture, which Gottschalk transcribed for one piano four-hands. Although deprived of orchestral color, Bartolucci’s shimmering notes in the treble, accompanying Alessandrini’s warm melodic lines, compensated more than adequately. The Firenze Duo also took advantage of elasticity that would be impossible with a full orchestra. The music swayed and breathed, the contrast between the two pianists was profound, and yet the ensemble aspect was excellent, and synchronization of all four hands was just about perfect. 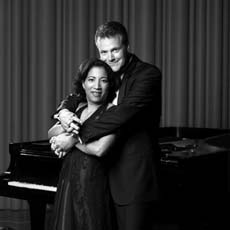 The Canadian Duo Turgeon brought us back to South America: Brazil, to be exact, with Valse de Esquina, by Francisco Paulo Mignone. Subtle tugs of the invisible elastic that connects the duo created a seductive dance that left me panting.

They followed up with Cuban composer Ernesto Lecuona’s Cordoba, Ante el Escorial (Cordova, in front of the Escorial) and the popular Malagueña, which turned up the heat even more. The two pianists possess vastly different characters, with contrasting tonal signatures and personalities at the keyboard. Tightly cohesive, their dramatic interpretations of the music evoked duels, cooperation, negotiations, and perhaps even threats. Edward Turgeon provided warm and generous support to Anne Louise Turgeon’s flair and flamboyancy. This battle of equals stood apart from nearly all the other ensembles; the dynamics between the two changed constantly.

Off in a New Groove

After a brief intermission, the Angelo Duo took the audience in a new direction with George Cables’ standard, Helen’s Song, arranged for the duo by Bruce Cameron Munson. Here was a duo who have worked together for a long time. Ample give-and-take, solos that soar above grooves, and improvisation are all essential elements in jazz performance, and the duo gave us all that, plus the coolness of extended techniques, such as plucking the strings and tapping on the piano. Their comfortable groove put us at ease for an entertaining conversation. 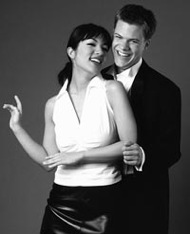 So do piano duos perform as one or as two individuals? Of course, the answer is both, depending on the repertoire and the team. The close-knit Pas de Duo occupies one end of the spectrum, while Duo Turgeon is at the other, but the Ruslan-Raffi Duo, which performed the Symphonic Dances from West Side Story, by Leonard Bernstein, was in a different dimension altogether.

A protégé of Raffi Kharajanyan, Ruslan Perezhilo teamed up with his teacher after the death of Nora Novik, with whom Kharajanyan performed as the Riga Piano Duo for some 40 years. The pair navigated through the rhythmically complex score deftly and decisively. John Musto’s transcription gave more shining moments to the first pianist, the young Perezhilo, while Kharajanyan provided his partner with a warm, yet solid, foundation on which to soar.

Speaking of the new generation, no more sensational young piano duo team can be found than the Anderson & Roe Duo. Formerly classmates at the Juilliard School, Greg Anderson and Elizabeth Joy Roe are the hip, YouTube generation of duo pianists. Indeed, you can watch a delightful video of their performance of Mozart’s Sonata for Two Pianos.

They began with an indulgent, yet intimate, selective reading of Samuel Barber’s Souvenirs. Their strengths complemented each other and the product was greater than the sum of the two. You felt a sense of complete trust between them, and the security gave them more freedom.

Their own duet transcription of Billie Jean, by Michael Jackson, had the electricity of the original, and the movements were carefully choreographed, too: There were moments where Roe’s hands darted between Anderson’s hands, and in one section Roe stood up to pluck strings while Anderson reached around her to play treble notes. Their flamboyant, virtuosic performance brought an enthusiastic audience response. The message here was that two-piano music should be entertaining. The transcription probably would have amused Scott Joplin, and the execution was absolutely brilliant.