The North American premiere of Sofia Gubaidulina’s 2007 Violin Concerto No. 2, In tempus praesens (In the present time), arrived Thursday as an important musical event, revealing a strong, compelling, unusual, and rewarding work.

The soloist, Anne-Sophie Mutter (who had commissioned the concerto), gave a stunningly brilliant performance, with the highest of notes (some close to scraping the instrument’s bridge) coming across rock solid, overtones swirling in the air … all without visible or audible effort. 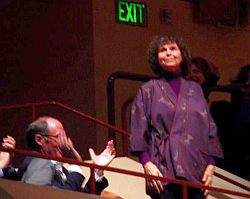 Michael Tilson Thomas and the San Francisco Symphony gave their all, playing the difficult score with seamless excellence. The evening featured a new work, and a tough one at that — and yet Davies Symphony Hall was full.

And the reception for this eminently “modern” work? Long, enthusiastic, sincere applause on Thursday; a standing ovation on Friday.

What was the collaboration between composer and violinist in creating the concerto? Asked by conductor James Gaffigan in the preconcert “Inside the Music” program, the simple question elicited an extraordinary response from a slyly smiling Gubaidulina. She gave the finished score to Mutter one hour before the first rehearsal. The violinist sightread and played it — to Gubaidulina’s surprised satisfaction, and quite to the disbelief of anyone in the audience.

The orchestration is without violins. Why? “I have my violinist,” said Gubaidulina, referring to Mutter. Most concertos pitch the soloist against the orchestra, the hero against the world, but “in this case the relationship is different,” says the composer, “the violin initiates something, it lights the fire.” (Those in the know say only Hindemith’s Kammermusik No. 4 has strings but no violins.)

The 35-minute concerto seems longer not because it’s “too long,” but because it packs in so much, and alternates between moods, scenes, and emotions in a seemingly endless variety.

And who was the stranger as the concertmaster? First-chair viola (no violins, see above) was Jonathan Vinocour, principal violist in St. Louis, performing a weeklong trial with SFS in the auditions for the positions here. What luck to fly by on probably the only occasion when the violas take command! 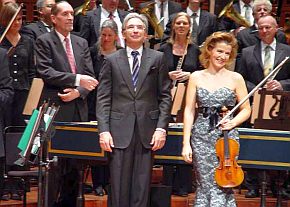 The concerto opens with a simple, lyrical, yearning theme on violin alone, posing a kind of question, to which two brief “answers” are given — one in major key, the other in minor. The orchestra enters in a disjointed conversation; not an adversary, more an observer.

The orchestration is wondrously colorful, with harp, xylophone, a Wagner tuba, a mighty timpani duel (reminiscent of the finale of Nielsen’s Symphony No. 4), high notes at the edge of audibility (dogs may get even more out of this than humans), scherzos, extreme rubato, and a hair-raising orchestral thud repeated 41 times, somehow never becoming monotonous.

Through it all, consistently dominating, is the solo violin, with a brilliant presence, but adversarial. If the concerto were an opera, Mutter would be the entire cast of singers, the voice floating above the thoughts and feelings of the orchestra. It’s all a varied, mysterious, beautiful musical landscape; once traversed, there is no “understanding” of it, only the desire to see, or rather, to hear it again.

There is a climax near the end, which lesser composers would use as culmination of the work, but not Gubaidulina: She has a quiet, magical sound close the work, a kind of disappearance, rather than a Beethovenian “this is it!”

Other Components of an All-Great Concert

The program-opening 1926 Prokofiev American Overture, Op. 42, has a feeling and unusual orchestration similar to what Gubaidulina wrote 80 years later. The two works are both modern-but-tonal, lively and engaging.

The second half of the concert was all-Ravel, the 1911 Valses nobles et sentimentales, and the 1920 La Valse. Would all that waltz make for a monotonous concert? Not in the least. The longer work is full of contrasts and quirks in itself, ranging from wistful to explosive, and both pieces received such a dazzling treatment from MTT and the orchestra that monotony was not within the realm of the possible.

For anyone tempted to classify MTT as a “Mahler conductor” or one with special affinity for American works, these concerts have served to tag him additionally as a Ravel colorist of the first order. Tim Day’s flute and Carey Bell’s clarinet led the way for an orchestra at its best all evening long.