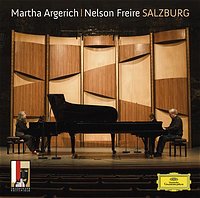 Both pianists are notable virtuosos, yet their ability to meld into each other’s personality for such precise ensemble playing is remarkable. Of course, Argerich and Freire have been playing and recording piano duets for nearly 20 years, so their ensemble is naturally polished. Every little musical gesture of rubato is played with exactitude. It’s almost as if they were communicating through telepathy, which is even more impressive than the sheer brilliance of their individual panache.

There’s also a fine sensitivity to the various composers’ styles, with one exception: the Ravel. Brahms is played with broad lyricism and alternating glitter. The various scherzo variations are dazzling, the nobility of the passacaglia finale is invincible. Among conductors of the original orchestral version, the Op. 56a, this reminds me most of Bruno Walter’s old recording. The level of resonance achieved through artistic use of the pedals sounds out wonderfully, especially in the chaconne finale.

Schubert’s Rondo for piano four-hands finds the music in a particularly sunny mood, unrushed at a stroll. It dates from 1828, the year of the gravely ill composer’s death, though there’s no hint of his miseries in the music.

Schubert Grand Rondeau in A major


Like other composers of the period, Schubert wrote quite a lot of works for piano duo — 60, in fact. After all, every middle-class family owned a piano as a symbol of prestige. It was a bit like owning a swanky car today. Since most children had lessons, and often at least one parent did too, a piano offered endless home entertainment. Argerich and Freire’s elegant performance is as light as an Austrian Spanish Windtorte. (That’s a large, baked meringue shell, usually of 8 inches in diameter and 6 inches tall, filled with fresh fruit and topped with a flat, baked meringue cover.)

Since both Brahms and Rachmaninov were expert pianists, their transcriptions of their orchestra works come across beautifully. Among Ravel’s friends, by contrast, there was a constant debate about which he was worse at: his piano playing or his conducting. His transcription of the ballet La Valse provides none of the glamour of sound in the original orchestral score. Then too, on this CD the playing goes a bit wild, with excessive implementation of rubato and a coda that’s too hard-shell and way too fast. It sounds merely hysterical. And for the only time on this disc, the sonics turn glassy-brittle.

The Symphonic Dances of 1940 were Rachmaninov’s final published work, and one of his most original and daring works. The three movements are supposed to represent morning, dusk, and night, yet in everything but title this was his Fourth Symphony. It’s gloriously bravura music, especially given to virtuoso playing, and boy, do Argerich and Freire deliver. They capture all the rapture of the full orchestral version, along with most of the color. This might be the finest performance of the disc.