It took a while — until after intermission, in fact — but the San Francisco Lyric Opera's new production of La Bohème, unveiled on Friday night at the Cowell Theater at Fort Mason, finally gelled into a strong performance. The singers eventually gave themselves over to Puccini’s score, but the first half had some rough moments as everyone was trying too hard to “act.”
We saw Rodolfo (Vincent Chambers) full of artistic angst, Mimì (Darynn Zimmer) simpering, and Musetta (Shawnette Sulker) soubretting about. The notable exception was Marcello (Nathaniel Hackmann) with his glorious voice and boyishly exuberant acting. The opening scene between Marcello and Rodolfo had a nice bit of comic business, the two of them struggling to keep warm under a thin tablecloth. 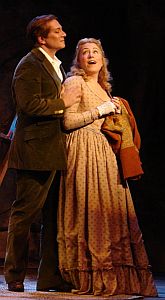 Vincent Chambers as Rodolfo and Darynn Zimmer as Mimì

The musical high point of Act 1, Rodolfo and Mimì’s arias introducing themselves to each other, had about as much heat as Rodolfo’s ill-fed stove. Lighting designer David Ransom made a poor choice to dim the stage lights and put a spotlight only on Rodolfo during his aria and Mimi during hers. While the two arias serve as a sketch of each of the lovers in turn, this is also the moment when the two become instantly enamored with each other. Downplaying the other character’s reactions, as they listen onstage, robs the the audience of the chance to see the attraction take hold.

The kindling did not ignite until the duet after the arias. The vocal demands of Puccini’s score at this point will not allow acting, so all the two could do was to sing their hearts out. This was the point they began to be believably in love with each other, and we in the audience began to love them. 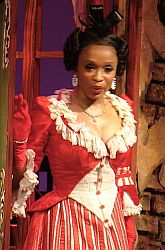 Sulker has a lovely, flexible voice, though her singing could benefit from a more fluid, legato line. Again the acting got in the way of the character. The staging for Musetta’s waltz in Act 2 is overdone and repetitive. A piece of advice to every Carmen and Musetta out there: Be a wily seductress, not a leg-flashing, lap-dancer. It seemed as though she and director Heather Carolo had borrowed from Anna Netrebko’s champagne-bottle-slinging, party-girl-at-dawn characterization in the Los Angeles Opera’s La Traviata. If so, it was a good move.
Singing Displaces Antics
After intermission this Bohème was a completely different show. The opening night jitters were gone, and the voices settled into place. Roldolfo gave the audience a magic moment as he sang of his love, his fear, and his all-consuming jealousy, while Marcello urged him on with an icy, “I don’t believe you” to get Rodolfo to come down to the bare bones of his problems with Mimì. Chambers has an excellent legato line and a full voice with a rich patina.

Vocally, Zimmer was competent, even lovely at times but her Mimì lacked depth. She turned the heroine’s soulful naivité into transparent scheming. Mimì, in a way, has something in common with Debussy’s Melisande (another of Zimmer’s roles) in that she feels the world around her acutely, but lacks the experience to make sense of it.

A scene from La Bohème

The strings and the brass in the orchestra struggled with tuning and with the score, though the woodwinds held it together. Barnaby Palmer’s sensitive and powerful conducting lent much beauty to the performance. The women of the chorus were a bit timid vocally compared with their male counterparts and had a hard time making their entrance in the opening of the third act. The members of the Golden Gate Boys Chorus sang well and were a lovely sight onstage. Carolo’s pacing of the piece overall was quick and fluid, although the curtain really should have come down for the creaky, messy scene changes after Acts 1 and 3.

The company should be lauded for its ambition in putting on Puccini in the same town as the world-renowned San Francisco Opera. SFLO attracts a younger and more diverse crowd than the SFO and makes for a much livelier evening out.

Lydia Mayne holds an undergraduate degree in vocal performance and a master of arts in musicology from the University of Utah. She is currently studying the history and aesthetics of opera at Stanford University.