The Redwood Symphony celebrated its 25th anniversary on Saturday, opening its season with a potpourri of pleasing music at Cañada College in Redwood City. Eric Kujawsky, who founded the orchestra and has been its music director for all 25 years, conducted the occasion. Sixteen members of the orchestra have been with it all that time, as well, and got to stand and take a round of applause. 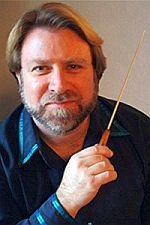 Although it was not mentioned from the podium or in the program notes, Saturday was another anniversary, too: the 104th anniversary of Dmitri Shostakovich’s birth. That’s perhaps a minor number in the grand scheme of anniversaries, so it was marked with a minor work, his Festive Overture. And altogether festive it was in Redwood Symphony’s rough yet cheerful handling, entirely lacking in the grimly overblown “forced rejoicing” that Solomon Volkov’s book Testimony has taught us to hear in much of Shostakovich’s “public” music. There was crisp playing here, especially in the brass — something we’d hear a lot of in this concert.

After that came something completely different. Niccolò Paganini’s Violin Concerto No. 2 in B Minor, Op. 7, is a rather dull little work, actually, though it’s redeemed by a couple of good melodies, including a duet for the soloist and glockenspiel (thus the work’s nickname, “La Campanella”), and the opportunity for the violinist — originally the composer himself, of course — to show off. On this occasion, that fortune fell on a local boy, Stephen Waarts. Just turned 14 two months ago, and looking not a day older, Waarts stunned the audience with his dark, mature tone and his assured and confident approach to the music. He has an artful sense of pitch, which came out particularly gracefully in the glissandos. He wrote his own first-movement cadenza, a good pastiche of the Paganini style. No mindless trick performer, he brought out such beauty in the melodic line as could be found, with a rich sound especially in the double-stops. He wisely played to his strength by choosing another virtuoso piece thick in double-stops for his encore, one of Henryk Wieniawski’s Op. 18 caprices.

Considering everything else it had to do in this concert, the orchestra apparently did not concern itself much with rehearsing its backup role in the Paganini. And that was an appropriate allocation of resources, as the spotlight in a virtuoso concerto like this one belongs to the soloist. Youthful though he is, Stephen Waarts fully occupied it.

The second half of the concert was the orchestra’s turn to play virtuoso. It set itself a huge challenge in the densely packed score of These Premises Are Alarmed, by Thomas Adès. This composer’s flickering, bird-chirping idiom can be difficult for listeners to grasp on first hearing, especially in a work as brief as this (only three minutes long, almost shorter than pronouncing its title). Kujawsky helped us out by having the musicians play it through twice. I expect, though, that this piece was best appreciated by listeners who remember the Redwood Symphony playing Adès’ larger work Asyla five years ago, or who are otherwise immersed in the composer’s style. This performance has to fall under the category of a valiant try. The rhythmic shimmer proved elusive, especially in the opening section, as if the performers couldn’t quite shake off the mud from their boots,when they should have been darting through the air. The sonorities were good throughout, however, especially as the music echoed itself.

After that test, Copland’s well-known suite of Four Dance Episodes from Rodeo, for all its rhythmic complexity, was dead-easy by comparison, and the Redwood Symphony played it as if it were indeed just that easy. The players caught the spirit, reflected the humor, and made the dance numbers swing. This was especially noticeable in the trombone and trumpet solos in the first episode, where the soloists, Eric Dabel and Dan Swinehart, both cajoled the rhythm into jazzlike flexibility, under Kujawsky’s firm direction. The strings were at their strongest in the “fiddlers tuning up” exercise at the beginning of the third episode. Such technical problems as there were in this performance (and these were few) were nicely compensated for by the quality of the sound, with some fine blending among the sections, and by the energy and enthusiasm of all the musicians. This was not routine to them; it was bouncy and fun.