Yundi Li presented a recital of tried and true audience favorites at Herbst Theatre on Sunday, under the auspices of San Francisco Performances. Some of them he has played here before. I went to the theater hoping to gain some insight into the artistic imagination of this acclaimed young artist. I left dazzled, puzzled, and wishing for more substance along with the pyrotechnics that these days seem to be the measure of all things pianistic. 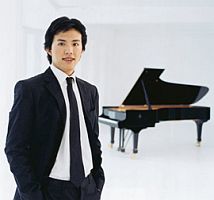 The program began with works that, above all, require refinement to make their effect. The Mozart Sonata K. 330 got a highly polished reading that brimmed with enthusiasm and the sense of how much fun it must be to be a world-class wunderkind. It was followed by four Chopin mazurkas, Op. 33. Li pulled the tempos this way and that, searching for a rhythm that is as elusive as it is bewitching when found.

The first piece seized my attention with its aching melancholy, and I could barely catch my breath through the lively one in D major, taken at a clip too fast for any dancers I could imagine. The C-major mazurka is the simplest of the set, and it seemed to have caused Li to doubt that Chopin's music was reaching us. In any case, the liberties he took with the written dynamics of the final mazurka in B minor upset its delicate balance of pathos, gloom, and wistfulness.

He then scratched the announced but overplayed Nocturne in E-flat and went directly to the Schumann-Liszt Widmung, which certainly felt more like Liszt than the heartfelt song of its composer. There was hardly any repose to be found, even at the words "Du bist die Ruh," which seemed to require agitation and the need to produce a big effect. Surely Liszt, despite his liberal use of arpeggios up and down the keyboard, would not have approved distorting the piece's meaning.

Listeners might have wondered why he placed this piece, which is often given as an encore, at this point in the program. By closing the first half of the concert with Chopin's Andante Spianato and Grande Polonaise (the latter being another work that usually brings on the bravos at the end of a concert ), Li revealed both his great strengths as a virtuoso and the limitations of this approach to program building.

He also set himself a challenge for the second half of the concert. Although he left no doubt that he can fire off octaves with the best of them, I felt that he was trying to outdo himself. The result was speed at the expense of substance, and power trumping poetry.
Painting by the Keys
I usually can tell whether a pianist came to know the Mussorgsky Pictures at an Exhibition through the Ravel transcription or from the original piano version. If the performer feels the need to add octave doublings and overdo the climaxes, you think somehow that this wonderful work, which the superb pianist Sviatoslav Richter considered to be the greatest work for piano by a Russian, can't quite stand on its own. Mussorgsky asks the performer to take time to stop and look at the paintings he's describing in the music and then to reflect on them during the various promenades inserted between them.

In his performance I felt that Li was impatient with the peculiar qualities that make the Pictures as strange and fascinating as they can only be when played on the piano. His tempos can be erratic. The "Children Quarreling" movement alternated between allegretto (the correct tempo) and presto, and, despite the fleet fingerwork, the picture sounded distorted. Similarly, the unhatched chicks could never dance their "ballet" at the clip taken in this performance. There was riotous energy in the "Marketplace at Limoges," but it would have been even more exciting, and surely more humorous, if all the strange and disorienting harmonies could have been clearly heard.

When the cow finally ended its rampage, literally careening into the "Catacombs," the audience heard one of the most moving of the Pictures in Li's performance. His phenomenal fingers were forced to take a time-out and there was nothing to do but hold each chord for a long time, giving the composer center stage. Listeners could feel the meaning behind these few strange and disturbing chords that take us to the end of all earthly things. When the "Promenade" appears again (for the last time) and movement returns, it is woven into otherworldly harmonies of the catacombs. Mussorgsky calls it "In the Language of the Dead," and the ghostly tremolo in the right hand sent a chill down my spine.

When Baba Yaga then appeared and all hell broke loose, as it must, Yundi Li was in his element, spewing fire and brimstone everywhere. Still, I must mention the quiet chorale near the beginning of the "Great Gate of Kiev" section, which is to be played "without expression." It was magical and restored my faith in music and in Li's interpretive gifts. But then I'm a sucker for a true pianissimo.