Hélène Grimaud’s new solo disc, titled Resonances and newly released on DGG, comprises the recital program with which she has been touring this past season. It features three piano sonatas, each from a different period. So, what do Mozart, Liszt, and Berg have in common? Grimaud sets out to demonstrate, with high-voltage, quasi-operatic readings that are clearly meant as a departure from the typical anthologies in which three or four works by the same composer are presented, often as part of a “complete” traversal of a body of works. 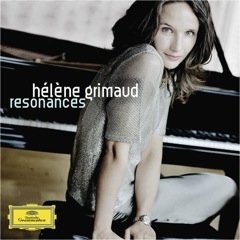 Mozart: Piano Sonata No. 8 In A Minor, Allegro Maestoso


It is a welcome change to find a pianist willing to risk the juxtaposition of Mozart and Berg in two of the most tersely tragic sonatas in the repertoire, followed by the sprawling, formally experimental Sonata in B Minor by Liszt. The CD presents listeners with the challenge of summoning a fairly large amount of angst if they are to listen to the program as a recorded sequence of tracks, rather than as in a concert setting where there’s a necessary pause between works.

Mozart’s Sonata in A Minor, K. 310, which he wrote not long after his mother’s death, grabs, or stabs, the listener with a tritone dissonance in the first bar. Although it’s marked maestoso, the music is filled with an intense anguish that looks forward to the operatic masterpieces that would come in a few short years. Grimaud goes for the forward momentum generated by the hammered chords in the left hand, giving us poignancy rather than pathos in the halting ritenutos where the music seems to try to catch its breath between sobs. The slow movement — beginning with apparent calm in an arching melody, which leads to an agitated middle section (development, actually) with repeated minor seconds — is still shocking today. It seems to be looking forward to the music of a hundred years hence, and Grimaud gives us the dissonances without apology. Here, her analogy to “operatic” style presented in the program notes seems right on the mark, and her declamatory style of playing served the music well.

Berg’s Sonata, by contrast, is in a single movement. And, though it still bears a key signature of B minor, after the first cadence four bars into the piece it becomes clear that the old triadic harmonies of the classical period have given way to altered chords based on fourths; thus, holding the form together is going to challenge both the composer and the performer to their limits. It is clear that Berg intended to stretch the Wagnerian harmonic even beyond Tristan und Isolde, and if resolution is to come, it will only be in the final bars, just as it did in the final bars of the “Liebestod.” Tristan and Isolde find release, even ecstasy, in the final B-major cadence. Grimaud’s performance of the Berg Sonata goes even further, and it could only come before intermission at a concert. After scaling the heights of passion and the depths of exhaustion, the music finally dies away in the most pathetic of final cadences: a true fade into oblivion.

The Liszt Sonata is also in a single movement, one lasting nearly half an hour. Following the Berg, it seems to be a little ill at ease, needing to prove its hero’s credentials with storming parallel octaves, quasi-religious chorales, doubt-filled recitatives, and even a demonic fugue. Following the Berg, I had to question whether the virtuoso fireworks are what this piece is really about. I wanted to push the pause button a few times during Grimaud’s pedal-to-the-metal reading, as I couldn’t find the calm center in the performance. I wished for moments of reflection that, in the quiet sections, might signify the search for faith, or at least relief from the hectic life of a touring virtuoso. This would seem to be crucial if Liszt is to find the transfiguration, which it seems he ardently sought (and found) in the final bars of the work.

After the Liszt comes some Bartók Romanian Folk Dances, like an after-dinner digestif, atmospherically played, but seeming anticlimactic following the three previous works.