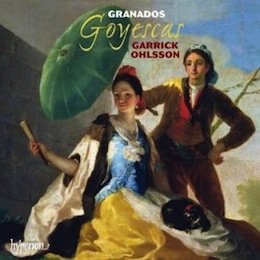 Garrick Ohlsson’s latest CD, released by Hyperion Records, is titled Granados: Goyescas. Enrique Granados’ piano suite Goyescas (Los majos enamorados, or The Majos in love) was inspired by the works of the great Spanish painter Francisco de Goya (1746–1828) and completed in 1911. The suite consists of six pieces, unified by recurrent melodic ideas and by a single, rather heartbreaking plot: the male protagonist, majo, dies at the end, leaving his beloved maja behind.

Filled with melancholy melodies and scintillating rhythms, Goyescas are based on infinite modifications of relatively short tunes, enriched by ornamental, harmonic, and coloristic variations. Intricate, quicksilver figurations weaving around main melodic lines that travel through different voices, luxurious harmonies, and incessantly shifting tone colors provide fertile ground for the pianist’s virtuosic skills and imagination. Ohlsson takes full advantage of these opportunities, using the composer’s indication at the beginning of the score, “con garbo y donaire: avec beaucoup de grâce” (with charm and much elegance), as a guiding principle. His performance is marked by immaculate passagework, strong poetic sentiment, and, of course, “charm and much elegance.”

There are actually more clues concerning the interpretation of Goyescas than the composer’s score markings; Granados recorded the first four pieces for the Welte-Mignon reproducing piano in 1913. Recently, these recordings were released on the Pierian label. Granados himself plays with striking improvisatory freedom, and Ohlsson, thankfully, carries on the composer’s ingenious approach. The only exception can be heard in “Quejas o la maja y el ruiseñor” (Laments, or Maja and the nightingale). In this piece, Granados rolls and staggers most of the chords in his performance, boosting the improvisational flair, but Ohlsson keeps the chords in synchrony. I confess that I prefer the former. By contrast, Granados’ recording suffers from the limited capacity of the medium. The Welte-Mignon was, unfortunately, incapable of relaying a myriad of infinitesimal timbral and dynamic nuances. Ohlsson’s recoding possesses a lavish palette of tonal colors, holding a definite advantage here.

A particularly difficult task in Goyescas is to present every piece as a cohesive whole, since numerous thematic repetitions tend to merely circle around and around. Ohlsson expertly cements incessant improvisatory wanderings, revealing tangible lines of development. In his hands, each piece moves purposefully toward what Rachmaninov called tochka, “the point.” While savoring every delightful detail, Ohlsson never loses the perspective of an overall design.

In addition to Goyescas, the CD contains two more Granados offerings. One is El pelele (Goyesca) (The Straw Man). In the original, Goya depicts a merry group of young women tossing a straw man up in the air, using a blanket like a trampoline. After the eerily tragic conclusion of Goyescas, in which the spirit of the deceased majo plays a ghostly serenade, “El pelele” comes as a welcome festive relief. The endpiece of the disc, Granados’ brilliant showpiece Allegro de concierto, brings the entire recital to a flamboyant conclusion.