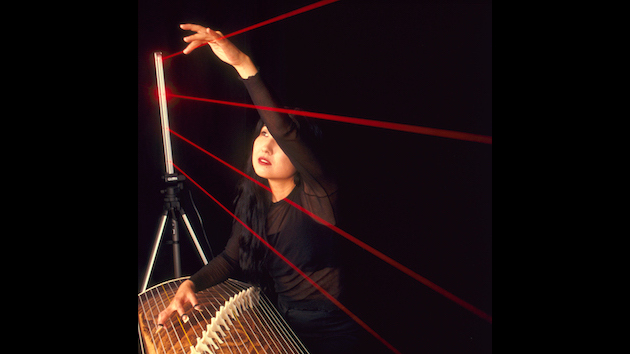 Miya Masaoka is not afraid of silence. In her opera A Line Becomes A Circle, presented at Roulette on Wednesday evening, the absence of sound is often as musically significant as its presence.

The piece begins with four musicians processing quietly through the audience, making barely audible sounds with their voices and handheld instruments. Unhurried, they make their way toward the stage, where a host of musical instruments await — drums, marimba, koto, and more. If the earth slept, I imagine its awakening would sound something like what the performers then create: scattered, flickering noises, vaguely rhythmic, with hollow and resonant timbres. Elegant video projections, by Ethan Edwards, add to the feeling of elemental tranquility.

A prolific and consistently experimental composer, improviser, and performer, Masaoka has an omnivorous artistic sensibility. Her past endeavors include a recording of Thelonious Monk tunes reimagined for the koto, an interactive installation that translates plants’ real-time responses to their physical environment into sound, and — perhaps most provocatively — a performance piece in which giant Madagascar hissing cockroaches crawl over the artist’s naked body. 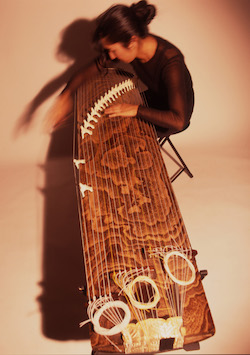 Like much of Masaoka’s work, A Line Becomes A Circle draws upon multiple artistic traditions. The composer describes the piece in hybrid terms, as a Shomyo-Noh chamber opera, inspired partially by her recent study of Noh (the classical Japanese musical drama) as a 2016 Fulbright fellow in Japan. Previously performed in San Francisco and Philadelphia, the piece lasts about an hour and features a spare, poignant libretto consisting of haiku fragments by the 19th-century poet Shiki, written shortly before his death from tuberculosis at the age of 34.

Following its atmospheric opening, A Line Becomes A Circle traverses increasingly substantive sonic ground while retaining a sense of unremitting calm. A wistful melody, played on a flute, dissipates into silence. A duet for soprano and marimba explores the space between two notes, E-flat and F — first sotto voce, then with increasing volume and presence. The marimba’s two-note exploration eventually morphs into a vigorous ostinato, pulsating underneath the other instruments’ exploratory wanderings. 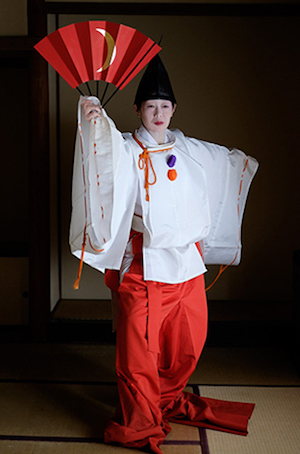 All four musicians — soprano Ann Moss, percussionist Chris Nappi, vocalist Makiko Sakurai, and composer/vocalist/koto player Masaoka — bring the piece to life beautifully, but Sakurai’s performance merits particular attention. Her Shomyo chanting (a form of classical Buddhist chant that originated in India and was later adopted by multiple Buddhist sects in Japan) is stunning. Hardly moving her lips, she produces a deeply resonant, multilayered sound, emitting long, descending lines in which musical urgency accumulates. The contrast between her placid exterior and the pathos-laden sound that emerges is startling at first, as is the register — significantly lower than what we tend to expect from a woman’s voice. These departures from the listener’s expectations only serve to increase the fascinating, utterly compelling nature of her performance.