What a joy to experience Kate Royal in person! Looking for all the world like a Greek goddess, draped in a form-fitting, floor-length black dress secured over one shoulder, the elegant young soprano gracefully entered Hertz Hall to present her Cal Performances recital. With her dress slit just high enough to occasionally display enough calf to make clear that she does far more than spend all day standing in place by the piano, and her hair tastefully pulled back, she looked like the million-dollar woman whose chiseled profile and dimpled chin declare her riches. 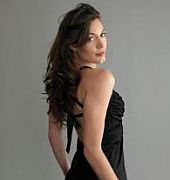 Her voice does the same. Shortly after her superb accompanist, Roger Vignoles, had seated himself, Royal smiled with unforced assurance as she began Joaquín Rodrigo's Cuatro madrigales amatorios. The mature sound that poured forth, belying her age (she was born in London in 1979), possessed at the core the same calm, heartfelt warmth and the lyric beauty that make her debut CD (EMI) and recording of Schumann's Liederkreis, Op. 39 (Hyperion), so ingratiating.

Except that, in person, there was so much more to savor. Down low there was an occasional bit of breathiness, while the highs bloomed and resounded without apparent effort.

Royal's is the voice of a woman who knows what love is about, and does not fear to express the intimacies of the heart. She is also an animated singer, whose naturally demonstrative expression always operates within the bounds of classical restraint. She can gaze down forlorn, look outward with expectancy, and reach out with passion, but never in a self-conscious or studied manner.

The more she sings, the more she expresses herself, and the more you sense that her physical grace and vocal beauty are reflections of a pure soul. (If I'm deluding myself, please don't wake me from my reverie.)
Even Richer Artistry
Judging from the Rodrigo, which she recorded on her debut recital, Royal's artistry has deepened in the past year. The madrigal "¿De dónde venis, amore?" (Where have you been, my love?) was filled with life, and "De los álamos vengo, madre" (I come from the elms, mother) was more energized than of yore. And the follow-up, Enrique Granados' Quejas, o la maja y el ruiseñor (Complaint of the maiden and the nightingale), was simply gorgeous, with Royal's gravity of utterance and lyrical flights matching Vignoles' poetry at the keyboard. "Love! Ah! There is no singing without love," Royal declared, in tones the nightingale might recognize as its own.

Although her French pronunciation is occasionally suspect — parfums became parfan, and langueur something like longaire — there was nothing equivocal about Royal's performance of three of Debussy's Cinq Poémes de Baudelaire. With Vignoles' playing redolent of mist, opium, and sensuality, she captured the unbridled love and ecstasy of "Le Jet d'eau" (The fountain) and the decadent perfume of the other songs.

Debussy's early "Air de Lia" (Lia's air) from L'Enfant prodigue was the clincher, with some tones radiant, others pleading, and the final bars laden with emotion. Her Debussy may not be as unforgettably unique and seemingly idiomatic as her late countrywoman Maggie Teyte's — whose is? — but the emotional affect is ideal.

In selections from Joseph Canteloube's Songs of the Auvergne, Royal delivered one of the most seductive, adoring, and ultimately disdainful renditions of "Lou Boussu" (The hunchback) you might ever wish to hear. Her "La Delaïssádo" (The forsaken shepherdess) was not as perfectly placed and tender as on her recording — Vignoles, in a rare lapse, played too aggressively — but the heartache was profound.

Nor was her "Malurous qu'o uno fenno" as get-down as Madeleine Grey's, whom Canteloube conducts in the historic first recording. But the final verse of the beloved "Brezairola" (Lullaby) was exquisite, and "Uno jionto postouro" (A pretty shepherdess) gorgeous. (I know I've used that word before, but that's how she sounded.)
Sweet Voice of Youth
Royal took to Richard Strauss as to the manner born. The four early Mädchenblumen — songs about cornflowers, poppies, ivy, and the water lily — displayed the voice at its freshest, scented with the sweetness of youth. As she turned to the more familiar "Einerlei" (Singular one) and "Ich wollt ein Sträusslein binden" (I would have made a bouquet), I was reminded that it is possible to be expressive and animated (à la Elisabeth Schumann) without a trace of calculated artifice (as in Elisabeth Schwarzkopf).

The soaring high notes that filled the hall on Strauss' "Als mir dein Lied erklang" (When your song rang out) demanded encores. The first, the simple English folk song Early One Morning, arranged by Vignoles himself, was so perfect as to suggest that Royal will join her predecessors Kathleen Ferrier and Janet Baker as a supreme interpreter of English song. (Bravo to Vignoles for his wonderful suspended pause before the final note.)

Delibes' Les Filles de Cadiz (The women of Cadiz) was, by contrast, exuberantly operatic, the trills perfect without being splashy. Singing from the heart, Royal closed with Carlos Guastavino's more modest, inward La Rosa y el Sauce (The rose and the willow).

I stopped on the way home to buy my beloved a springtime bouquet of flowers. I knew no better way to share the essence of Kate Royal's gifts.