The dapper St. Petersburg Philharmonic was in town last week for two concerts in Davies Symphony Hall with a more intriguing break with the world's music than expected. Whereas Russian touring orchestras usually devote themselves to presenting music exclusively from their homeland, Conductor Yuri Temirkanov went for the larger view by including Austrian, German, and (in the encores) English music. Beside all that, he presented two monumental compositions of Prokofiev. And, as a generous observation of Sir Edward Elgar's 150th birthday, each program included a popular Elgar piece among the encores. 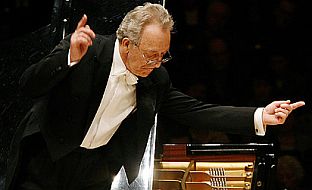 In a way, the concerts presented a broader view of the St. Petersburg's skills than I had previously conceived of. The orchestra is capable of playing any composer stylishly, and that denotes real class in an orchestra. This, plus the Philharmonic's fabled beauty of sound, made for memorable pleasures.

Just for the record, the R&J excerpts included: "Montagues and Capulets," "The Young Juliet," "Friar Laurence," "Dance," "Romeo and Juliet Before Parting," "Dance of the Girls From Antilles," "Romeo at Juliet's Grave," "Masks," and "The Death of Tybalt."

Monday's concert, by contrast, consisted of the Overture to Mozart's Le nozze di Figaro, K. 492, followed by violinist Julia Fischer playing Beethoven's Violin Concerto in D Major, Op. 61. The program was rounded off with Prokofiev's Fifth Symphony in B-flat Major, Op. 100, before encores of the Nimrod section of Elgar's Enigma Variations, Op. 36, and the Apotheosis finale from Nutcracker. Performances created standing ovations all the way.
Getting More From Less
As an elegant touch, Termirkanov presented each work with an appropriately sized body of strings. For the classical works of Schubert and Mozart, he seated reduced numbers of strings. Those works, for instance, were played with only four of the orchestra's full complement of 10 double basses. There were similar reductions throughout the string section. A few more strings were added for the Schumann and Beethoven concertos. Then the whole shebang packed the stage for the two Prokofiev masterpieces.

The venerable Freire has made a specialty of the Schumann concerto throughout his career. Indeed, it was among his first recordings released in this country as part of a two-LP set of concertos, way back in the 1960s. His was a model performance, with limpid legato passages and a light touch even during staccato passages. So, too, the orchestra was simply perfect in all its poetic elements.

Violinist Fischer is a brilliant technician, no doubt about that. But she played an extremely literal performance of the Beethoven concerto. Rarely did she add any emphasis to her phrasing, such as moving to highlight the important momentary peaks in melody.

Instead of playing the concerto, she seemed content to merely play the notes. Most everyone seemed delighted with that. Even Temirkanov and the orchestras were enthusiastically applauding. Not I. I was bored, as were those I noticed napping nearby.
Leader of the Pack
The St. Petersburg Philharmonic is Russia's oldest and most famous orchestra. The majesty of its precise ensemble and majestic timbres ranks it as an emperor among world orchestras. It's uncanny how it can blaze away, full throated as it did for Prokofiev, with nary a hint of harshness.

Its warmth of sound was tactile, yet it never slipped into sappy sentimentality. I can only imagine that, aside from purely musical skills, the individual players have the finest sort of instruments — not least in the strings.

That beauty of sound paid rich dividends for Schubert, and for Elgar in particular. Temirkanov took an uncommonly broad tempo for Schubert's Entr'acte, emphasizing the composer's smiling-through-tears pensiveness. The verve and airy dash of Mozart's Overture were accomplished with a fine eye for the melodic lines, which seemed to chuckle as they moved along.

And as for Elgar's Nimrod variation, I can't remember a finer, more absorbing, or more moving account. This is, after all, one of the most beauteous pieces of orchestral writing we have. Even Mahler never surpassed it, or at least it sounded so during Temirkanov's loving performance.

Still and all, those Prokofiev performances were the spectaculars of the two evenings: assured, gripping, and flawless in tempo. The grotesque power in "Montagues and Capulets," the charm set forth during "Masks," or the floodlights of sound for the sword-fight music opening "The Death of Tybalt" were jaw droppers.

And as for the final lunge that closes the Fifth Symphony — which is perhaps Prokofiev's greatest work — it was like a truck slamming into a brick wall at high speed. (I actually lurched back in my seat when they hit the final chord.)

Apart from my finding Fischer's Beethoven something of a bore, the two evenings could not have been more rewarding. By the time the two evenings were done, I felt more satiated than after Thanksgiving dinner.