SFMOMA and Yerba Buena Center for the Arts
By Jeff Dunn , 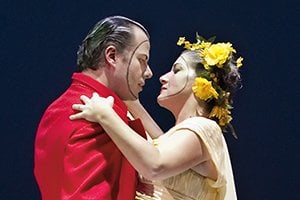 I hope the smartest patrons left their brains at the door of the Yerba Buena Center for the Arts’ (YBCA) Novellus Theater. They would have been following Virgil Thomson’s advice to “Leave your mind alone and see what happens” in the course of his opera Four Saints in Three Acts, and would have had a nonsequiturial great time with his faux-naïve church harmonies and down-homey dances that gracefully fit Gertrude Stein’s pleasurably nonsensical libretto.

A klatch of conservators at SFMOMA and YBCA (not to mention the Contemporary Jewish Museum) conceived the production, billed — not unpredictably — as “An Opera Installation.” Director Brian Staufenbiel and Ensemble Parallèle Music Director Nicole Paiement coordinated the audiovisual spectacle, with the help of composer Luciano Chessa and video/performance artist Kalup Linzy, who provided A Heavenly Act. This item was a short, prefatory opera of its own, using scraps of Stein’s text left behind after Thomson’s edits in the 1950s.

Four Saints was a Broadway hit when it premiered in 1934, partly due to its inherent charm, partly to the fame of its collaborators, extensive publicity, and novelty. The history of the arts and civilization has moved on, of course, since then. Design and dance elements provided contrast with the score’s three- and four-square harmonic rigidity and lack of polyphony.The frisson of its all–African-American cast cannot be recaptured now, though “gray-facing” most of the performers with makeup was a nod in that direction without raising offense. The contrast of Saints’ narrow emotional range with that of post-Wagnerian extravaganzas and angst-ridden products of then-contemporary expressionistic/atonal composers stands far less starkly today, with our “anything’s-OK-with-me” expectations. Dada was becoming passé even then. Nevertheless, the efforts of all concerned at the Novellus Theater raised results above the dusty museum-piece level, despite the fact that museums were involved in the conception.

Foremost elements in the success of the production, in my view, were the costume design of Christine Crook, choreography by Michael Mohammed, and stage design of Matthew Antaky. The primary colors, and the fluidity and frequency of movement (aided by wheel-studded props), were consistent with the childlike activity and confidence of the music. Thankfully, they also provided contrast to the score’s three- and four-square harmonic rigidity and lack of polyphony.

Soloists, too, were excellent, especially Eugene Brancoveanu as St. Ignatius, who impressed with hall-filling resonance and his bright-red getup. Heidi Moss’ St. Teresa I and Kristen Choi’s St. Teresa II were fine singers and actors, as were the majors domo Commère (Wendy Hillhouse) and Compère (John Bischoff). The smaller roles were capably executed, especially Jonathan Smucker’s St. Chavez. And Paiement in the orchestra pit kept all together with appropriate élan.

Normally, we’d have a summary of the plot at this point. Not possible, other than to say it’s really two saints (Teresa and Ignatius) inHeavenly Act was mildly interesting, but seemed utterly out of character with Thomson’s opera. four named but continuous multiscened divisions. Plus at least nine additional saints. Plus a text that lies blissfully on the tongue, that is a pleasure to hear with Thomson’s music — and that, for the most part, is unintelligible. Some of this could have been corrected by clearer singing on everyone’s part (the “clearest” award went to Brancoveanu’s “Pigeons on the grass alas” aria, the highlight of the evening, to the crowd’s delight). But at least one (albeit ahistorical) decision should have been a no-brainer: Put up supertitles!

Interesting, but Does It Really Belong? 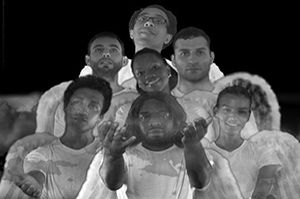 The preceding Heavenly Act was mildly interesting, but seemed utterly out of character with Thomson’s opera, despite the presence of Stein’s (again, unintelligible and unsupertitled) text. Chessa/Linzy’s “installation” was considerably slower in pace, more serious and mystic — even lugubrious, with black-hooded saints/monks loitering around while intoning something — and overtly religious. It purports to portray “Heaven-how-it-actually-is” and “Heaven-as-we-imagine-it,” with gloomy projections of clouds and white Angels in America–like winged saints peering down from the back screen on singers/intoners below. The middle section is a “loud, noisy, Saturday-night party” attended by morose monks, with waltz music and sounds of LPs clicking at the end of their runs. This segues into a sins-forgiven Sunday gospel-music clapping interlude before moving on to limbo and back to heaven, which (in some way unknown to me) has been “reconfigured.”

The highlight sonically is reached at the end, when the two Teresas sing (something!) after scattering rose petals. One is singing normally, the other in a modified sprechstimme. The result is a suitably unearthly combination, but not from a place I’d like to be anytime soon. Throughout the piece, Linzy’s powerful visage loomed from projections, or in person walking about the stage like the observing angels in Wim Wenders’ film Wings of Desire. The artist’s projections climaxed at the end with seven angels arrayed in a cloud-surrounded triangle as if they were bowling pins: a striking conclusion.

Chessa’s and Linzy’s piece would be most worthwhile presented separately at a place where people would be encouraged to bring their brains, and librettos.