Salonen: Out of Nowhere
By Michelle Dulak Thomson , 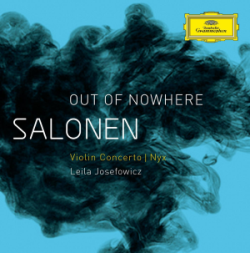 Perhaps it is, after all, a win-win: Gustavo Dudamel conducts the Los Angeles Philharmonic, while Esa-Pekka Salonen composes. Salonen the composer did turn up occasionally during his L.A. years as music director, but if his 2009 Violin Concerto (written for, and here performed by, Leila Josefowicz, with the Finnish Radio Symphony under the composer) is anything to judge by, we ought to be thinking of him as composer first, conductor second.

Salonen's scheme in the piece is an odd trajectory for a violin concerto, but I think it works. As the concerto opens, the soloist sounds like nothing so much as a hunted animal, pursued by little more than shadows (some tuned percussion), but frantic for escape. Then the broader orchestra comes in — low brass and low strings, sounding menacingly Sibelian — and the violin's panic increases. It doesn't really cease until the close of the movement, where the soloist escapes upward into a haze of harmonics. I don't think I've ever heard a violin concerto where the orchestra sounded so openly hostile toward the soloist, or where the soloist was so obviously meant to sound frightened.

The dreamlike second movement is all shot through with those harmonics. (It seems a place of repose, but I know how those sounds are produced, and there are some nasty challenges in there.) The third is something else: For the first time in the work the soloist seems to be riding the orchestra, rather than the other way about. It's vigorous, bumptious, and involves the soloist in all sorts of banter with individual players of the orchestra.

And then the finale, most unexpectedly, is a second slow movement — another dream vision, and one more hypnotic than the first. The soloist is wandering through a world that is something like the one in the first movement timbrally (the vibraphone and the menacing low brass and strings are back), but now there is no panic at all, only serenity and confidence. The environment seems utterly changed by the persona of the protagonist.

Sharing the disc is Nyx, a 2011 work whose name is that of the Greek goddess of night. I don't think the idea of this 20-minute phantasmagoria is that Salonen has rowdier nights than most of us do. It is yet another dreamscape, and this time like an actual night of dreams, moving from idea to idea sometimes abruptly, sometimes gradually in that Sibelian manner of slowly shifting textures. It opens with a braying pack of horns, wends its way through innumerable vistas, and ends with a splendid coup de théâtre, wherein a grand peroration involving strings at full force, obviously (to the listener expecting the usual ending) the closing gesture, evaporates slowly into nothing but a shoestring viola section, and then there's a tiny whiff of high woodwind, and we're done. Just like an actual dream, in fact.