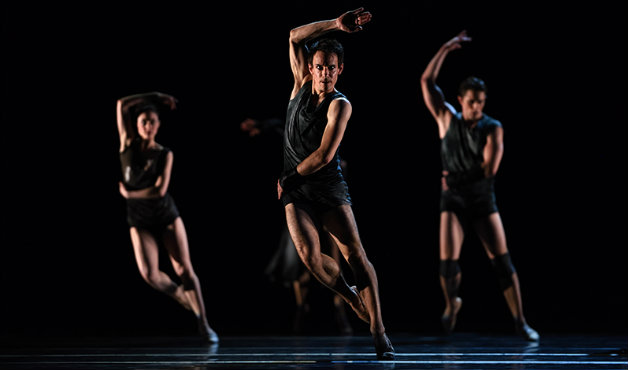 Liam Scarlett, whose “Hummingbird” premiered so successfully two years ago at the San Francisco Ballet, left sunlit skies, feathery fluttering, and tempting nectar far behind Wednesday night with the premiere of “Fearful Symmetries,” set to the music of John Adams, part of the company’s second 2016 repertory program.

Scarlett, the Royal Ballet’s artist in residence (his Frankenstein, to premiere next year, will be a co-production of the Royal and San Francisco Ballet), hit the dark and dangerous streets with a gang of black-clad toughs, sneering in tight pants and short skirts, passionately, combatively partnering and being partnered by their honeys and homies. Brilliant neoclassicists became punks personified, beginning with Sofiane Sylve, and the audience sucked it up, begging for more.

There was more, of course, because once the ball gets rolling, you just can’t get enough of nasty. Couples and soloists spun, kicked, rotated their booties and other appurtenances thereto. Gennady Nedvigin, all blond hair and black leather (Jon Morrell did the costumes), flew through the air, sneering at his fan base, who went nuts when he practically gave them the bird. Lorena Feijoo, red hair bobbing, and Luke Ingham, commanding but in her thrall, turned up the heat with pliant yet skintight partnering, a motif reinforced by Dorés Andre and Joan Boada, Vitor Luiz, and Frances Chung.

Against David Finn’s backdrop of white, neon lights — arranged horizontally, like dashes of Morse code — 15 dancers, singly or in groups, drove their bodies forward, muscles sharply delineated against the darkness, then receded upstage into the blackness. How dark was it? Well, from Row N, it was almost impossible to identify the artists. A video from another “Fearful Symmetries” (1988) ballet, choreographed by Peter Martins, looks lovely, almost playful, and soft. This is the opposite: Scarlett makes all Adams’ music look exuberantly menacing as the notes smash against each other and the dancers move on a razor’s edge. 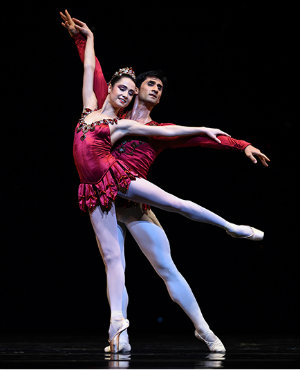 After quite a few absorbing minutes, things went from dark to simply strange. As the tough-stuff scenario wound down to an  inconclusive end — the operative word might be “dwindled” — there was a pause on the empty stage, and suddenly — totally unexpectedly unless you’d read the program — a couple in white stepped forward. It was Yuan Yuan Tan, the only woman in the cast on pointe, partnered by Davit Karapetyan. She was also the only woman fully clothed; her partner seemed to be wearing tighty whities. While it’s always a pleasure to watch them dance — especially Tan — their tender and graceful pas de deux, bathed in light, proved an awkward counterpoint to what had gone before. If it was intended as a corrective or a commentary, it simply didn’t play out that way. As they sometimes say in the news business, it could trim. Martin West led the orchestra, which sounded as sharp and as dangerous as can be.

The richly varied program opened with George Balanchine’s “Rubies” from his full-length Jewels, charm and wit set to Stravinsky, played by the San Francisco Ballet Orchestra conducted by Martin West, with pianist Roy Bogas. The principals were Maria Kochetkova, delightfully partnered by propulsively energetic Joseph Walsh, and Sofiane Sylve. She brilliantly enacted that “big girl” role that Balanchine has in several of his best ballets: a regal figure, enigmatic and captivating. Kochetkova could have sparkled more brightly in her initial appearance, but gathered her energy as the dance continued. The corps de ballet was terrific.

Mark Morris’ “Drink to me Only With Thine Eyes,” for all its charm and sauciness one of the most fluent (and it would seem heartfelt) tributes to the art of ballet ever made, is set to Virgil Thomson’s Etudes for Piano. It’s been out of the repertory way too long. How wonderful to see it back, especially with this cast. The 12 included Nedvigin, Vanessa Zahorian, Hansuke Yamamoto, James Sofranko, Norika Matsuyama, and Jennifer Stahl. They, and everyone else, danced to the farthest reaches of the stage, up, down, diagonally and side to side, their craftily casual, white costumes by Santo Loquasto accentuating the fluidity of their technique. To music played onstage by Natal’ya Feygina at the grand piano, the dancers soared. It would be no exaggeration to say they were trailing glory. Or maybe they were burning bright.