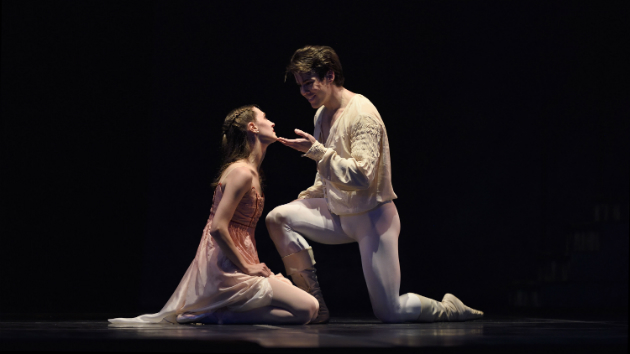 Helgi Tomasson’s version of Romeo and Juliet, back at the Opera House for its 21st  anniversary, is better than most adaptations, and thanks to the San Francisco Ballet’s steadfast pursuit of excellence, it’s better performed than almost all of them. But it’s not a perfect ballet, despite the marvelous orchestra, conducted by Martin West, or the luminously spectacular Veronese scenery, the work of the late Jens-Jacob Worsaae.

What makes some story ballets great and some with the greatest storylines not so great is a mystery into which we might delve at some other time. But to touch on a few things, we could start with composer Sergei Prokofiev’s music, which seems sometimes to strangle on its own lugubriousness, the deep horns gasping as the violins break high and free. Maybe that’s it – too much breathlessness, not enough soulful consideration. As a whole, the ballet carries the impetuous petulance of a teenager without enough countervailing heartbreak. Truthfully, it feels a bit flat.

This may have had something to do with Friday’s opening-night principals. As Romeo and Juliet, Carlos Quenedit and Sarah Van Patten bring superb technical skill to their roles. He is a fine partner, executing Tomasson’s arduous, imaginative partnering with strength and aplomb, allowing Van Patten to virtually sing her emotions through the lovely lines of her body. So Romeo’s overhead lift takes Juliet into a wave of motion, a maximal physical extension, of the love she feels. But it never intensifies. We’re seeing a series of gorgeous feats of technique and balance; it just doesn’t reach beyond the dancers to the characters they’re playing.

We’re seeing a series of gorgeous feats of technique and balance; it just doesn’t reach beyond the dancers to the characters they’re playing. They are Romeo. And Juliet. They’re not exactly a duo; they’re dancing, but they’re not acting. This thoroughgoing expression of unity is not an easy task by any means, and it would appear that both artists have the gifts to achieve, in time, a more complete rapport.

Their performances were matched with other fine work in a rich banquet of roles and styles. Anthony Vincent’s malicious Tybalt was as thin and dangerous, as dynamic in thrust, as a sword. (Marty Pistone, with Tomasson, choreographed the fight scene, and it’s a great one.) Sherri LeBlanc’s Nurse was delightfully maternal, every gesture meaningful and tender.

A special paragraph here for Taras Domitro as Mercutio, Romeo’s amazing, loyal, and doomed wingman. There isn’t another dancer who can spin with his precision, his acceleration. You’d think his energy would run down, not up. You’d be wrong. Domitro makes it all look so easy, bringing a natural brio and charm to the provocateur side of the role as well as the masterly technique and timing it requires.

Lord and Lady Capulet (Val Caniparoli and Sofiane Sylve) were chilly and withholding, greedy to forge a union between their daughter and Paris (Steven Morse), the perfectly bland, empty suitor. Dores Andre and Dana Genshaft were perfect Harlots, blithe in their footwork, shameless in their liberties, while, as acrobats, Norika Matsuyama, Francis Mungamba, and Wei Wang provided an exciting, limber splash of carnival. Ricardo Bustamante was an affecting Friar Laurence, believably the only grownup friend Juliet’s ever had. Poor Juliet.

Yes, the whole thing is sad. But it could be absolutely heartbreaking. Is that so much to ask?