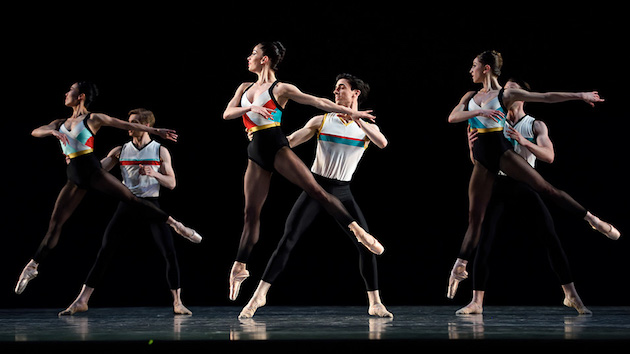 In the Countenance of Kings, Justin Peck’s barn burner, has it all. Your scribe will go out on a limb and say that the new piece is going to be the one people talk about when they trace the early career of this ridiculously talented young (27) dancemaker. It has a showy title and a terrific score by singer/composer Sufjan Stevens. Martin West conducted Thursday’s premiere. Orchestrated for the San Francisco Ballet by Michael P. Atkinson, its string and brass vitality is leavened by celeste sweetness.

The ballet’s moves intrigue, delight, and work beautifully, thanks to a company that does the same. While Peck’s is an original voice, as is Stevens’, it was impossible not to be reminded of collaborations between Jerome Robbins and Leonard Bernstein such as On the Town and West Side Story; the new piece has that urban thrust, coupled with a persistently glorious rhythmic intensity. And likeability. Let’s never (in this election year) forget likeability. 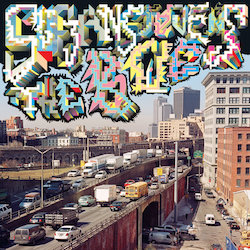 A bit of background: Peck is a dancer turned resident choreographer at New York City Ballet. Across the river from the troupe’s Lincoln Center home, there’s Brooklyn, aka Kings County, home of the BQE, or Brooklyn Queens Expressway. The Countenance of Kings was part of a Stevens 2007 multimedia composition, The BQE. Urban and gritty, there’s nothing regal about the BQE, a royal pain to drive on. But that’s what’s wonderful about the ballet. It captures the risk and elation of moving through such an environment. It’s also a reminder of Robbins’ choreography for Glass Pieces, with dancers, crossing the stage in walks and trots, capturing via Stevens’ Philip Glass-style music the vitality of a cityscape, even in the absence of any scape. Peck has that fluency with crowds of dancers — in this instance, a dozen corps de ballet plus six principals. They’re named, as originally by Stevens, who thought of them as superheroes arrayed against an evil empire builder, Robert Moses (once a major public-works figure). Quantus, Electress, and Botanica are the women; the Protagonist, the Foil, and the Hero are the men; and the corps de ballet is here called “The School of Thought.” That’s as far, really, as characterization goes. There’s no plot. There’s none needed. Ditto the scenery (none, save headlights or maybe footlights by Brandon Stirling Baker) and costumes (good-looking white leotards with color accents, designed by Ellen Warren).

This is one busy, busy piece, but it has an underlying sanity and politesse, if that makes any sense. People notice each other and take care. Speed, focus, energy; the movements are huge and huger. The corps work is replete with grand jetés and turns, beautifully coordinated; the precision feeds the force of the movement. The principals (Dores Andre and Joe Walsh, Frances Chung and Gennadi Nedvigin, Jennifer Stahl and Luke Ingham) are similarly tasked, fulfilling it all to perfection. There are supple, generous unfurlings at the knee and extensions from the hips, neat and elaborate lifts. There’s a moment when it all goes away and the corps lies down, facing the edge of the stage — a fake ending. They rise again, not necessarily dauntlessly, but persistently to dance again. It’s life, and it’s terrific.

The other pieces on the program were Wheeldon’s 2002 Continuum, set to Ligeti, played by Mungunchimeg Buriad and Natal’ya Feygina, which received a wonderful performance by its four principal couples, and George Balanchine’s  glorious Theme and Variations, set to Tchaikowsky. While several women of the corps de ballet appeared to have difficulty balancing on point through one of the Balanchine hand-holding chains, they recovered nicely, and the rest of the romp beneath the crystal chandeliers was delivered with maximum style and grace. It was a treat to behold. Principal dancers Maria Kochetkova and Gennadi Nedvigin delivered flawlessly. Her delicacy was matched by the tensile strength of her pointwork, and Nedvigin was superb both as pyrotechnician and partner. Martin West conducted. 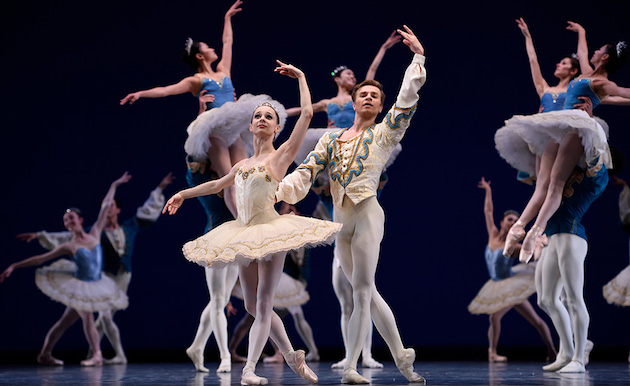