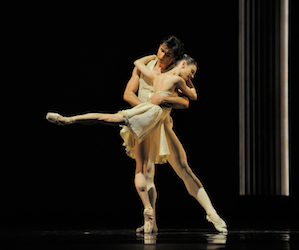 Caprice, Helgi Tomasson’s smart and pretty new ballet for the San Francisco Ballet set to parts of Camille Saint-Saëns’ Symphonies 2 and 3, has a lot going for it. Hearing the adagio from the so-called Organ Symphony, No. 3, rearranged for woodwinds (the Opera House has no organ) provided an interesting new texture, against which the company, particularly the two principal couples — Maria Kochetkova and Davit Karapetyan; Yuan Yuan Tan and Luke Ingaham — glowed.

Caprice’s clever set, designed by Alexander V. Nichols and lit by Christopher Dennis, has an interlocking backdrop of fluted pillars and crossbar in a style that looks classical or modern, depending on the lighting. Don’t look too closely between movements, when it’s sliding into place — it’s dizzying. Locked down, it goes fine with the ballerinas’ neoclassical tunics, shimmery and sparkly, designed by Holly Hynes.

Tomasson, the company's artistic director and principal choreographer said in an interview that he told the dancers to go for it, and go for it they did. It’s an extremely expansive neoclassical piece, with inverted (and straight-up) lifts and catches that inspired occasional gasps from the audience. To an extent, Kochetkova and Tan, two superb artists, danced against type; Tan, long and sometimes languorous, was more freewheeling than usual, and Kochetkova, smaller and more compact, seemed to find time within the music to display her gifts to the full.

Karapetyan is looking more like a danseur noble every week, becoming stronger and more refined while retaining his wonderful elevation. Ingaham, a soloist in yet another principal role, embodies a wonderful composure that complements his dynamism. In soloist roles, three men — Hansuke Yamamoto, Steven Morse, and Thomas Bieszka — contributed to the sense of eager forward motion that characterized the whole ballet, climaxing in a swirl of wonderful piques and pirouettes from the ballerinas and high-flown beating jumps from their partners. 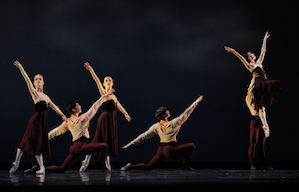 Mark Morris’ Maelstrom (1994), the first of many ballets he would make for the company, opened the evening. A big ensemble work set to the Beethoven Trio in D Major (“Ghost”) for 15 stellar dancers, it’s non-hierarchical, classless but classy. The costumes touched with maroon velvet, designed by the late Martin Pakledinaz, contribute to the suavity of the undertaking. Maelstrom is a ballet of its tremendous elan, superb musicality, and constant trickery. Just when you think it’s going to look classical, there’s a folky flex of the hand or foot; just when you think a mazurka will break out, we’re back with the traditional balletic verities, and just when you think you’ll be sticking in classical mode for a while, stand back, because here comes a line of dancers tearing downstage, the women, with outstretched arms, interspersed with the men, whose arms are flexed in a running position. The women are doing tidy grand jetes, and the men are springing as if shot from guns. The musicianship of Kay Stern, violin; Eric Sung, cello; and Roy Bogas, piano, spotlighted just below and to the right of the stage, contributed to the elegance of the enterprise.

The show ended with Yuri Possokhov’s Rite of Spring (2013). On second viewing, with composer Igor Stravinsky’s breakaway piece hitting age 101, this Rite seems less ritualistic and more nasty, but in a stylized, cartoonish way. The nude leotards the tribal women show when they pull their dresses over their heads look — um, shall we say fleshier? We shall. Jennifer Stahl is still most compelling, reprising her thankless role as the chosen victim. As the conjoined-twin Elders, wrapped in the same sarong and pogo-sticking around the stage, James Sofranko and Benjamin Stewart look more like ax murderers this time around, and the guilty pleasure in the propulsive evil of the whole thing stands fair comparison to watching Game of Thrones.